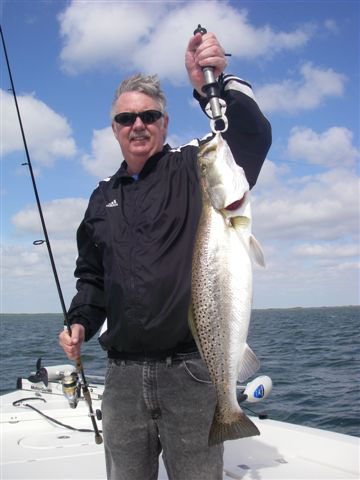 This is Bill Anderson, 29” trout caught and released.

The fishing in the Upper Laguna Madre has been very good. The trout and reds are every where, from the Kennedy Causeway down to Baffin Bay. We're catching several trout in the eighteen to twenty-nine inch range. With the price of gas so high, it's good that there are more fish on this north end of the Laguna Madre. The water clarity is beautiful even though the southeast winds have been relentless. We are not fishing the areas we want to, only the areas that we are able to.

The Land Cut is due but hasn't really produced much yet, as it has in previous spring runs. I talked to Art Morris with Texas Parks and Wildlife to see what he thought about the lower numbers down south. He said that they are just now starting their net samples and the preliminary results are good, with one trout over twenty inches per hour. He said that the run could be late due to the colder water temperatures that continued longer and that there have been more cloudy days keeping it cooler, too. He thinks the trout will still follow the brown shrimp that will travel through the Cut on the way to the gulf.

Also, I asked Art what effect Packery Channel has had on our system. He said, "It has had less effect than I thought it would. The water flow is only affected a few miles from the channel. The inland flats channel has changed from grass beds to all sandy bottoms. We're seeing more sharks and jackfish in the sample nets but, only within a few miles from the entrance." There are more numbers of snook than they thought possible and there have already been some caught this year. They won't know the real effect of Packery for a few more years when the biologist study the shrimp and bait movement. I'm hoping it will bring in more bait and fish, especially flounder.

I was talking with longtime friend and fellow guide, Doug Bird, the other day. He brought over one of the old lures that we used to use, the Bomber Long "A" minnow, in orange with a gold belly. It was still in the package, unopened. It felt like a real treasure. We were talking about the many spring seasons past that we had fished in Baffin Bay, trolling around the rocks casting these lures.

You could throw it on top of the rocks and the trout would just kill it. Believe me they still work, but I don't want to use them because they don't make them any more and the ones I have are priceless to me. Back then these baits were made for bass fishing in fresh water. The first thing we had to do was change the split rings and hooks. Now we have a large selection of lures made for saltwater fishing, including the scented plastics, such as the "Slurp" by Bass Assassin.

When Doug and I started out the only soft plastic was a shrimp imitation called the Tout Tail. Later, we discovered how effective the freshwater Bass Assassins were and we were able to catch much bigger fish on them. They are continually improving. It's great to use these artificial baits with so many different choices.

My brother-in-law, Bill Anderson, came down to fish one day. He's a bass fisherman from Lake Palestine in East Texas. We went out late in the morning on one of those really windy days when no one else wanted to go. We used the Saltwater Assassin in five inch shad, plum/chartreuse tail. We drift fished in a water depth of three feet and the waves were about two feet high. We caught a few small trout then he hooked a big one. I didn't have a dip net so, as he brought her up to the boat, I clipped her on the Boga Grip and handed her to Bill, then I took the picture and she was released. She was twenty-nine inches long, an excellent catch. He's got a good picture to show his bass fishing buddies.

My son had a great fishing day with his good friends, Freddy Vela and Dusty Doyle. I have known Dusty since he was born. Our families spent many fishing/surfing vacations together, traveling in Mexico. Dusty joined the Army after high school and he hasn't had much time to fish, I'm glad that they had the opportunity to go. The fishing was great. They caught trout after trout, enough for a fish fry afterwards with family and friends. Dusty is in the Eighty Second Airborne, he is scheduled to go to Iraq next month. Our prayers are with him and all those who serve our country.

Congratulations to Jay Ray Watkins and C. R. Webb for first place finish, winning the 2007 Team of the Year in the Texas Trout Series sponsored by Cabela's. It was a close finish and their hard work paid off. During the past two months they fished Port O'Connor, Laguna Madre, Matagorda and the final event was in Port Aransas. Each event consisted of three trout, live weigh-in tournament. The points were added up from the results of each event. I was impressed with the care given to insure the live catches and successful releases. The tournament should air in October on Fox Sports Southwest.

You can read more about it on my website under News/Articles. Also, on my website, "Cliffs Notes" is up and running. It has details of locations, conditions and advice, guaranteed to save you time and fuel when fishing.

The winds should eventually die down allowing us to have free roam of the bay system. Start out wade fishing early in the morning then out deeper to the drop off's later in the day. As the weather gets hotter, work the deeper drop offs, they should hold more fish. With the good reports from Texas Parks and Wildlife we should be catching lots of big fish in June and July.