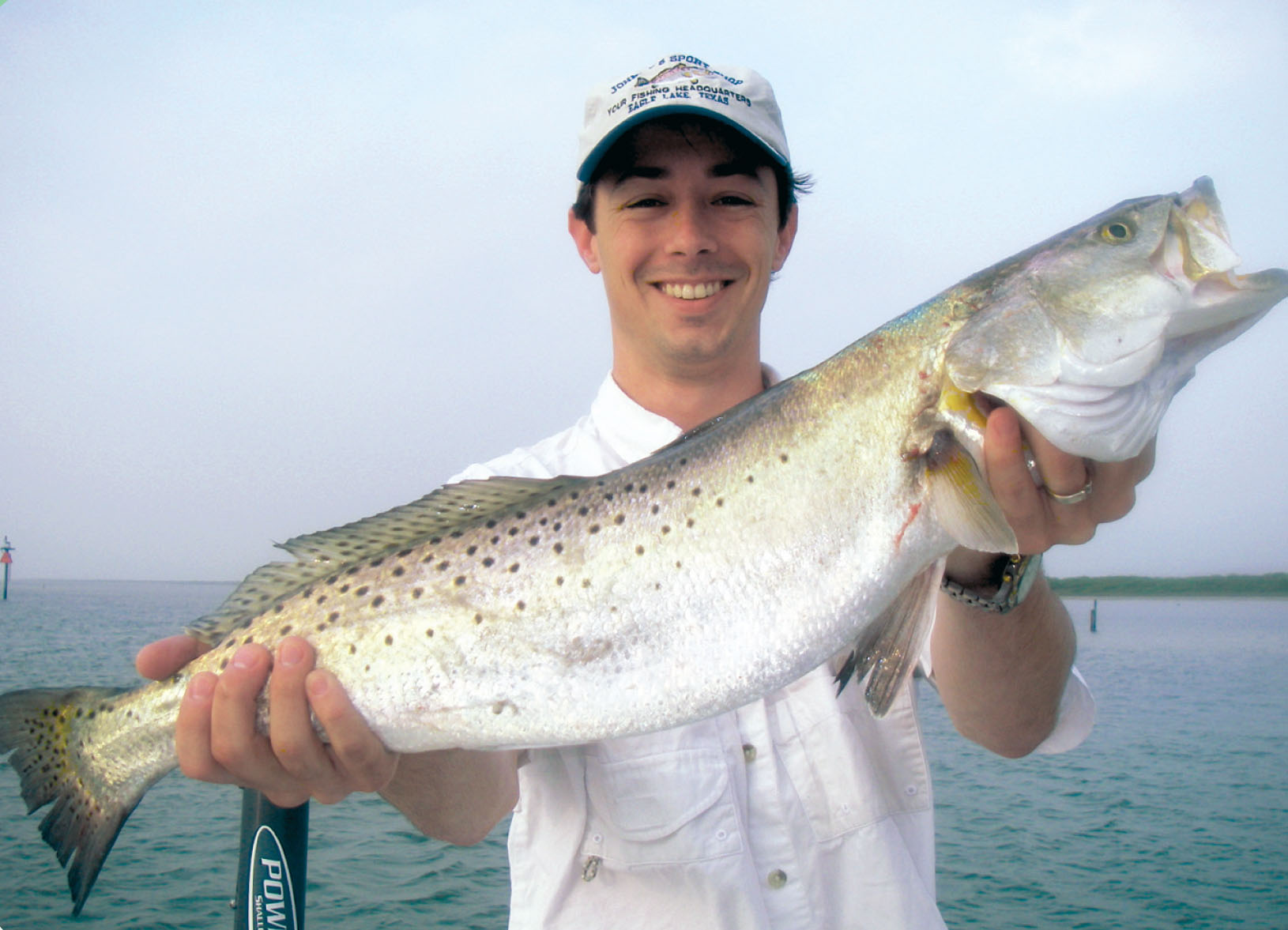 Lance Grigar with a 7-1/2 lb trout taken recently in the Land Cut.
This last month in the Laguna Madre and Baffin Bay has been a challenge. I’ve used every trick and technique you can imagine. We’re wade fishing shallow flats, working the dropoff in the Land Cut, drift fishing, and sightcasting.

Our local weatherman said, “We have had a ridiculous amount of wind.”

I agree; and because of it, a single approach or pattern is not going to provide consistent fishing. I’ve tried to use everything I could, especially keeping on the move and being versatile.

I’ve seen more shrimp in our system than I’ve seen in years. Almost every day I see flocks of birds working. I have tried drifting the birds and we will catch a few small trout and not much more. Other times, I’ll fish outskirts of the flocks, not always in the middle.

The water conditions in the Laguna Madre have been good for the most part. Of course when the wind is up it will get muddy but we can usually find some areas of cleaner water. This is when the Land Cut has paid off and I’ve been spending a lot of time there. Through all of the wind of the past month it has stayed relatively clear. I’ll put out drift anchors and use the Power Pole to work the edge.

In this past month I’ve spent a lot of time in the Land Cut. It seems like we get a big wave of fish in from the south for two or three days and they move on through. The fishing in the Cut will slow and get spotty for a few days until another wave shows up. In the old days the Land Cut would turn on with the high spring tides and stay consistent for two months. It would be good every day and you could catch all the fish you wanted. It was just a big stream of fish coming in from the south for at least two months straight.

This condition in the Land Cut brings up the subject of “tide runner” trout. These are the trout that move into the bay system from the gulf. Dr. Greg Stunz, professor of Marine Biology at the Texas A&M Corpus Christi Research Center, is doing a study on the tide runners and asked me to help. My job is to help collect a few trout. He can examine the otoliths, or ear stones, in their head and take tissue samples for genetic traces to see if they match the stocks from the gulf. I have always believed in the tide runner theory. To me they look different. They are more silver with a darker back than we see on our bay fish. Through his study he hopes to get the necessary data to support the dredging and reopening of the Port Mansfield jetties. This would be great with more water flow and hopefully bringing in more fish.

The fishing in Baffin Bay has been good when the wind gave us a chance. Most days we end up on the south shoreline seeking protection from the south and southeast wind. We have enjoyed several days wading shallow water over mixed grassbeds and sand pockets using topwater lures and some found quite a few big trout. It has amazed me how fat the trout have been. Maybe they don’t have to work as hard because the bait doesn’t spook so easily in the brown tide and they just hang around and gorge on fat baitfish.

On days when the wind was 20-mph or less I’d move around the corner of the mouth of Baffin and fish the spoil islands near Bird Island. The shallow grass beds are holding good trout and redfish. Also, the flats at Yarborough Pass have some trout. This area usually turns on in June and July.

Upper Laguna Madre has been producing too; the areas around Dead Man’s Hole and Pita Island have been holding really good trout. Some twenty-eight-inch trout are coming off the sand bars and shallow grass beds. They are mixed in there along with the reds. It’s been great for sightcasting. The reds have been easy to catch. The trouble is finding the scattered trout. Look for the black backs. They are in there but, very hard to find. Be prepared to spend all day in there to try and catch them.

A group from Johnny’s Sport Shop in Eagle Lake came down for a few days of fishing. One day was spent drifting under the birds. Everyone was catching trout. All of the sudden Mike Grigar sets the hook on a solid fish. She was a lot bigger than the rest at twenty-seven inches long. He was using a Bass Assassin four-inch sea shad with a paddle tail in the new color they call chicken on a chain.

Everyone has heard the story about how the guy in the back of the boat doesn’t catch as many fish as the guys in the front. Well let me tell you it didn’t hold true on this trip. Lance Grigar really put it on us from the back of the boat. We were working the dropoff in the Land Cut. He had no problem, catching a seven and a half pound trout and several other really nice ones. He out-fished the front and the middle of the boat with his plum/chartreuse Bass Assassin on a 1/4-ounce head.

We are hoping that early summer will bring some days of lighter wind. The fishing should continue to improve. I hope by the time you are reading this that I will be back to my old haunts in Baffin Bay. The redfish are really showing up and I’m seeing more crabs than ever in the shallow flats. I expect a tremendous amount of redfish this summer.