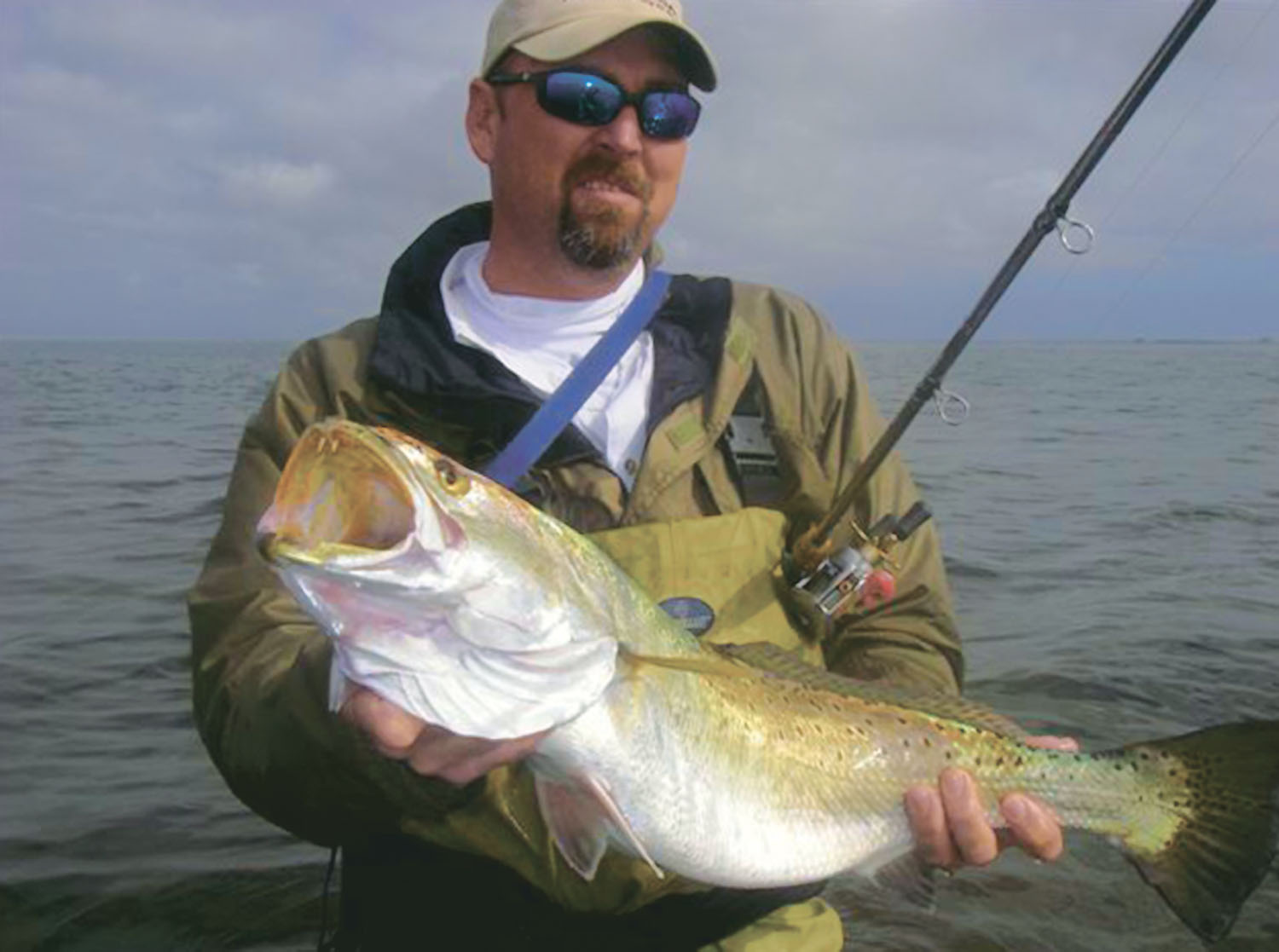 Farrell Jackson with a 30 1/2” trout, right at 10 lbs, Feb 08, 2007.
It's finally looking like spring. This is the time of year that I am experiencing the calm before the storm. Baffin Bay has been quiet, not many boats around just a commercial rig or two. I've had the last couple of months pretty much to myself on the Bay. Now that hunting season has ended people will start getting their boats out preparing for the spring time action.

The water temperatures have been the coldest that I've seen in a long time. Not so much the extreme cold but a steady cold for an extended time. The water temperature stayed in the forty's for weeks. This made for a slow bite, the fish were hardly moving. I've been fishing over deep mud bottoms in depths of six to seven feet. One day the air temperature was forty three degrees and the water temperature was forty-five degrees. I put an extra weight on a Corky and worked it real slow across the bottom and caught an eight and three quarter pound trout. The poor fish could barely move, it was like dead weight, too cold to shake as I reeled it in. It was a very slow bite; we only caught a couple more that day. But, I still had people that wanted to try so we stayed and ground it out.

A word of caution; there has been a dredge working just north of Baffin Bay near Marker 171 along the Intracoastal Waterway. They are dumping the fresh dredge material near those spoil islands where a lot of people like to wade fish. Be careful and make sure the bottom is hard where you wade. If you happen on that dredge material it's soft, you could sink straight down five to six feet.

Recently the fishing has picked up with the few days of sunlight that we've had. We were using the Corky and getting some hits then they just shut down. I could tell the fish were still in the area because the bait fish were there. So we switched to a Bass Assassin in Drunk Monkey color and in six casts caught four big trout, working it slow and letting it sit. So it just goes to show you that instead of switching places it's sometimes better to switch lures.

Working the lure deep with a soft plastic can be very effective. So try other lures and even go back to the boat and wait for the bite to start up again. That's what I've noticed this time of year, I've found it better to be patient, because the bite will turn off and in a short while turn on again. You'll see the bait start flipping or you'll see some slicks and you know the fish are there so stick with them.

With spring here the bays will become busier with boat traffic. I hope everyone will be courteous to the fishermen. I hope that the guys that are running along the shoreline will watch for wade fishermen and go around them giving plenty of room. It takes time and effort to set up for a nice quiet wade. If boats run by the fish will shut down for a while.

I expect the fishing to really turn on with the warmer temperatures. They will be on the move covering the whole bay system. It should be great!