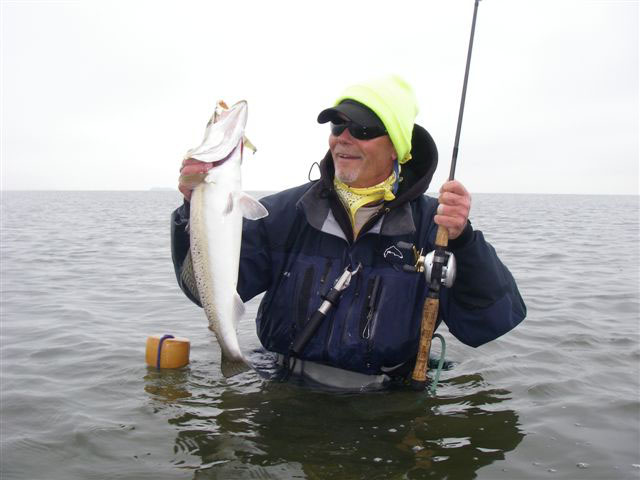 Ed Neeley – C&R on a nice Baffin trout.
The colder the better. We've had some real winter weather and the good fishing is back. Early winter was tough, we had a lot of brown tide and didn't catch a lot of fish. Then, like a switch, it turned around and big trout started showing up. The water conditions in Baffin Bay are getting better. It is still off-color but, there are some areas where the visibility is about two feet. North of Baffin Bay the water has been beautiful. There are a lot of good trout and redfish being caught in the upper Laguna Madre.

In between cold fronts the weather has been warm and sunny. That's the thing about winter here; the cold doesn't last very long. It's south Texas so, how bad can it be? Just cold, windy and raining. We catch a lot of nice fish when its warm and sunny but the really big trout are caught when it's cold and nasty weather and when most people don't go. I tell my clients, "Put on everything you think you will need then, put on some more. It's always colder than you think."

Early in the week I had three serious anglers come down for two days of fishing. These guys were interested in catching big trout and were prepared for whatever the weather would bring. They all had Simms wade fishing gear, which is what I use. I couldn't make it through these winters without it. All we needed was the right day.

The first day of wade fishing the conditions were overcast and very windy. Temperatures were in the fifties. We put our backs to the wind and gave it a shot. We all caught and released several good trout that ranged from five to seven pounds. The next day the weather was calm, clear and warmer. Again, we all caught good trout but, not the elusive ten pounders.

Just a couple of days later, the weather turned really nasty. The temperature was forty-five degrees, the wind was blowing hard from the north at about thirty miles per hour with higher gusts and it was drizzling. The chill factor was thirty-five degrees. For me, this was perfect big trout weather. The night before, David Sikes of the Corpus Christi Caller Times, had called and asked if he could come along and get some big trout pictures. I'm thinking, if I bring a sports writer, I usually won't catch anything. But I said, "Sure, bring all your warm gear. The weather will be miserable. The water temperature is forty-seven degrees."

Everyone met the next morning in the dark and I could tell that they weren't sure about the weather. I had confidence and said, "you can get in the truck or get in the boat; I'm getting in the boat." I was so pumped up I would have gone fishing by myself.

The five of us started wading and we all caught several trout between four and seven pounds. We were using two different lures and they were both working well. The Corky Fat Boy in day-glow and the Bass Assassin five-inch Shad in Texas Avocado. About one o'clock we went back to the boat. One guy had a hole in his waders and he was freezing. Amazingly he had hung in there.

We were in the boat trying to warm up when I noticed the mullet jumping more than I'd seen all day. Four of us went back out for another wade. Right away, David Sikes, caught and released a good trout. Jeff Messer caught another one about seven pounds. We missed a couple more, then Hal's rod bows up and he had a huge trout on. The fish was hooked down deep in the back of the throat with a Corky. She came up headshaking on the top of the water for ten to fifteen seconds, trying to throw that lure. She was blowing water everywhere and making noises like you've never heard. It was unbelievable and beautiful to watch.

Hal drops his rod tip down and the years of fishing showed. He didn't overplay the fish and didn't horse the fish in. He landed her perfectly, without a dip net. She was thirty-one inches long and weighed ten pounds! A great fish and his personal best. He said he'd been fishing since he was eleven years old and always wanted to catch a trout that big. This day was worth the bad weather. After that catch, we didn't even notice the weather. But, the wet guy in the boat did, he was turning blue, so we headed back.

Hooking a ten-pound trout and landing her is two different things. I've seen it enough times when fish are lost because the angler put too little pressure on them. The big trout will come toward you and you have to reel in fast to keep the pressure on. You have to control the big ones or they will take control of you. Get a hard hook set. Now that I'm using the braided line I'm getting more hook ups with a better feel, especially in the wind. The drag is kept tight but, not quite as tight as with mono. I use Power Pro in twenty pound test. Along with a twenty pound Seaguar Flourocarbon shock leader. So, if the fish is hooked on the outside of the mouth there will be enough stretch to take a brutal head shake. I use the Waterloo HP Slam Mag; the perfect big trout rod. It's powerful, light and sensitive. And forget the little dip nets that look like a tennis racket. I either hand grab or use a Boga Grip.

Coming up, I'm hoping for clearer water down south and the trout getting fatter. Even though we've had a slow start I think this spring will bring very good fishing.