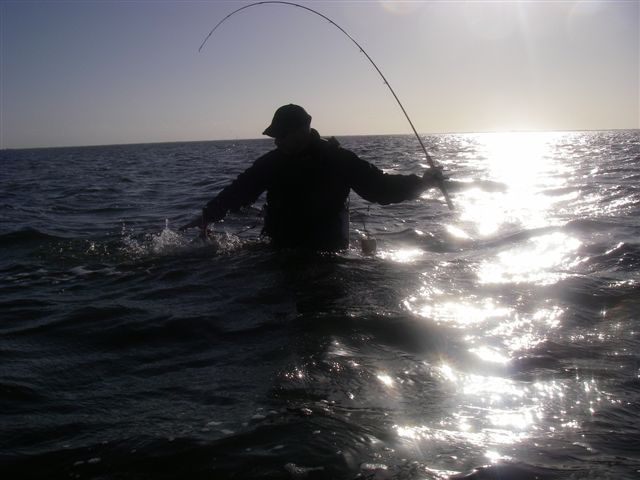 We've had thunderstorms and strong winds from every direction. We've had warm temperatures and even record low temperatures. This is keeping things stirred up. I end up fishing where the weather will let me fish. The unique thing about the Laguna Madre is that there is so much sea grass that the water still stays clear even with all the high winds. The water has been clear everywhere, the winds stirring it up will actually improve the fishing.

Another good thing about the wind is that it helps you to get in a long cast. It is very important to get a long cast in when you are drift fishing from the boat in shallow or clear water. The fish can see your boat and move out before you can get a lure to them. However, with the long cast you don't have a very good feel and there is a bow in the line from the wind. I use the Power Pro braided line in the twenty-pound test with the six-pound diameter. I can cast it a long distance and there is no stretch so I can get a firm hook set at the end of a long cast. It's been working well in these windy conditions.

The numbers of fish have increased. We're catching a lot more small fish with the big ones mixed in. This time of year you can catch several trout that are fifteen inches long and in the next cast get one that is thirty inches long. There are a lot of fish coming in from Corpus Christi Bay headed for the grass beds of the Laguna Madre to spawn. The shrimp and bait fish are showing up in the Intracoastal Waterway. We're getting a good push of Gulf water in from Packery Channel.

We had a heck of a foul weather day with some fishermen from Austin. They had been in the office all week and they were game. The wind was blowing thirty-five with gusts up to fifty miles per hour from the northwest, not my favorite direction but, the bite was still on. It was also raining off and on, but there was no lighting so we stayed out and fished. We were drift fishing in three feet of water, we had the large drift anchor out along with a lot of rope and we were still drifting fast. We landed half a dozen big trout and redfish and the largest trout was twenty-seven inches long; it weighed about seven pounds. The waves were so rough that we were limited on the lures that we could use. The best choice was the Bass Assassin Sea Shad with the paddletail; the color was pumpkinseed/chartreuse, with the one eighth ounce lead head. All four of us were just throwing it out and cranking it in fast, trying to keep up with the drift. It reminded me of bass fishing with a crankbait. We were quickly covering a lot of water. Even though the weather conditions were not favorable, we had a good day of fishing.

My son, Capt. Cliff, Jr., has had an excellent month of fishing. He's bringing in these great pictures of fish and I'm hearing good reports from his customers. Also, he and Jay Ray Watkins are fishing in the Texas Trout Series tournaments. They are an awesome fishing team. These are two guys that were born to fish. They have consistently caught trout and are in position to make a first place showing in the finals. I have really enjoyed watching them, naturally, and of course it's easier when they are doing so well.

Every year there's a push of big fish from the south moving in from the Land Cut. Last year at this time it had already happened. So far this year it has been spotty down south but, we're just now getting the strong southeast winds and high tides to make it happen. So actually, things are right on time. The bay systems are full of fish in May and June. Eventually the weather will settle down and I expect the fishing to get even better.

For those interested, please check out my web site www.cliffwebb.com I have just recently opened a new department on the site and it is called "Cliff's Notes." It is a yearly membership subscription that is full of good fishing information. It's designed to help you catch more fish. My guide's guide, Jay Watkins, gave me the idea and was very helpful in making it possible.