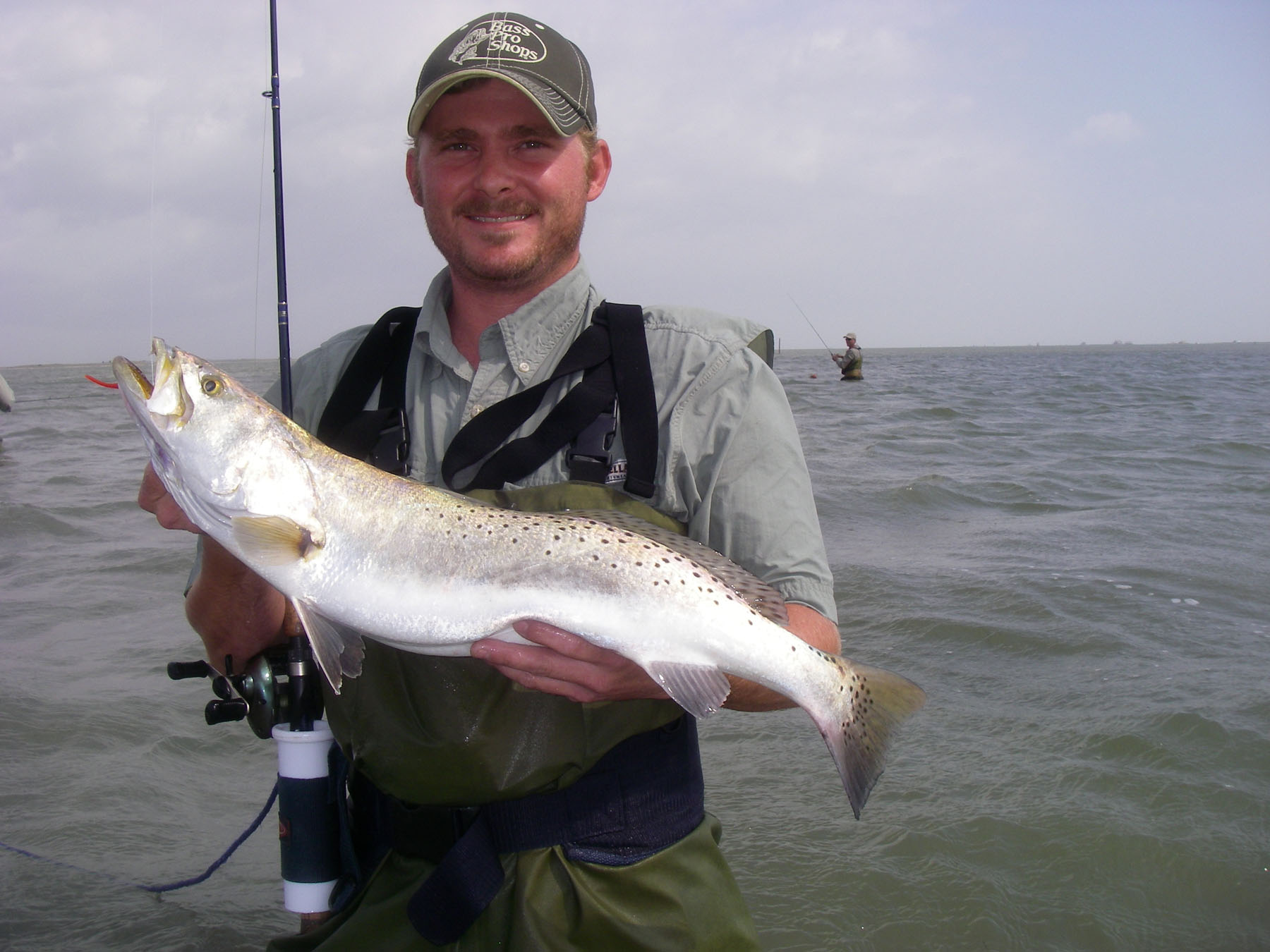 Joel Nichols with a solid 28 on a windy day.
This past month started out slow with low tides, dirty water and high winds. Lucky for us, it finished much better than it started.

In the upper Laguna Madre from the JFK Causeway to Bird Island the water has been very clear  with the visibility more than two feet deep.  There have been a lot of fish on the King Ranch shoreline. The west shore including the Pure Oil Channel and Emmords Hole area have been holding good numbers of keeper size trout and reds.  It looks like the trout are coming in from Corpus Christi Bay to spawn in the grass beds of the Laguna.

The water begins to get brown with low visibility from Bird Island going south and has been dingy all the way to Penascal Point.  This has made the fishing in Baffin Bay more challenging. The good fishing that I have found in Baffin has been on the south shore at Los Corrallos in knee deep water and sometimes less. This shoreline offers some protection when the wind blows from the south. Small topwater plugs have been working well in this area and on clear sunny days I have been using the She Dog with a gold belly and chartreuse back.  We have found that the She Dog with black back and chrome belly works better on cloudy days. The key in shallow, dirty water is to wait ten or fifteen seconds after the cast, just let the plug sit there, and then begin working it nice and slow with lots of pauses. The bigger fish are usually caught on the pause.

The best news is the push of water coming through the Land Cut this past week. This is what we wait for this time of year. We never know how many fish we are going to get in from the south.  Last year it wasn’t very good but we have high hopes this spring will be different. There has been good action in the Cut for about a week now and we’re hoping to see more. We’re getting clear water from the south driven by the southeast winds. The current is strong at this time which has the shrimp and baitfish on the move. We’ve had a very productive week catching trout, redfish and flounder.

In fishing the Land Cut I use both drift and wade tactics. On the calmer days we stay in the boat and wade when the wind makes it tough to control the boat. When we fish from the boat I use the trolling motor to hold just off the edge.  I usually start with topwater lures early in the morning and cast onto the grass edge. I find that pausing the lure right on the dropoff will draw a lot of strikes. Most of the strikes will come right over the edge where the grass meets the sand. When the surface bite slows down, I go to Bass Assassins on 1/4 ounce leadheads. Again, I make a cast up on the grass and raise the rod tip just enough so it doesn’t grass up. Then, at the edge I let it fall down slowly, making sure that I have contact with the bottom along the dropoff. Sometimes the fish are down deeper than you might think, especially the flounder.

The past two days were very windy. I had four wade fishermen for both days and we waded the north end of the Cut. The strong southeast wind created a good current that swept the baitfish up in the grass beds in the south end of Rocky Slough. The five of us stood in one area for several hours catching redfish and trout. The reds were twenty-five to twenty-eight inches long and a lot of fun.  All four of these guys were good fishermen; they were patient and didn’t mind staying in one spot, grinding it out in tough conditions. A good thing, because it really paid off.

It was about eleven o’clock when all of the sudden, Joel Nichols stuck a big trout. His rod bent double and after a few minutes of hard fighting he landed a fat trout that was twenty-eight inches long. It was his personal best.  I told Ricky Nentwig, who was standing next to him, to keep casting in the same spot; there could be another big trout with her.  Sure enough, Ricky’s rod loaded up after only a few casts and this one measured twenty-nine inches and was very fat. The photos were snapped and both fish were released. I found it noteworthy that both of these fish came off the same small grassbed and were likely there to ambush the bait being driven on the current.  Both of these fish were caught on the five inch Bass Assassin shad. The Texas avocado and solid white have been very effective lately. The fish that day were feeding on shrimp and sand eels.

I’m excited about our May prospects in the Land Cut and the south end of Rocky Slough and we are off to a great start, much better than last year. The water conditions in the Land Cut are much better than last year, too.  I’ve seen shrimp popping out of the water and flocks of birds are beginning to work over schools of fish.  All these are positive signs and hopefully mean better fishing to come. May is usually one of the best months down here. As soon as the wind slows down we should have good fishing in the entire bay system.