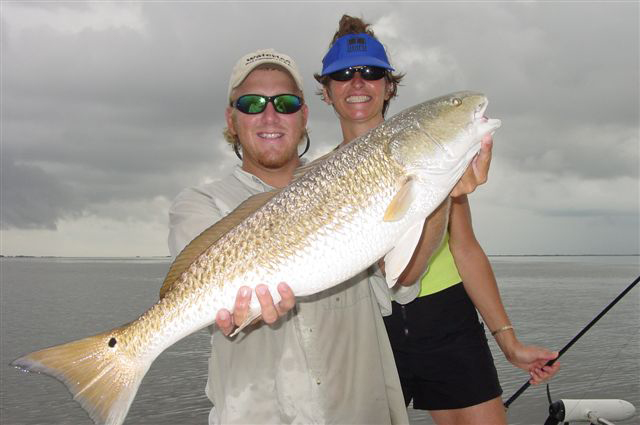 Cathy Hill enjoyed her fight with this huge redfish during a charter with Capt. C.R. Webb.

It is great to see the north wind blowing. We need to get a few more fronts and it will really help the fishing. It has been kind of slow but that's normal for this time of year when we are in between patterns. Calm mornings and a lot of sea grass are making it tough for the trout fishing.

The fish are scattered, I'm finding patches of bait and fish strung out everywhere. We'll fish one spot about forty-five minutes and pick up a few then move to another spot and catch a few. It keeps me on the move.

With more cold fronts coming we'll get a big push of water from Corpus Christi Bay into the Laguna Madre which means a wave of fish too. The water exchange from the Laguna Madre and Corpus Christi Bay is better since the causeway was raised and the west end was opened for water flow. Now that Packery Channel is officially open, hopefully this will help the water quality and improve the fishing.

It's usually good fishing a couple of days after the front. I'll fish the small channels and ditches along the west shore in depths of 5 to 6 feet. Fish will travel near the shoreline in these ditches that run a quarter of a mile or so long. These fish get in them and just run down the ditches, it's kind of like a highway for fish.

Conditions may not allow you to fish the way you want to. I really prefer to throw a small lead head with a Saltwater Assassin and bounce it off the bottom or maybe a suspending bait like the Catch 2000. A lot of times when the grass gets real bad I can't use them so I'll use a clicker cork. Bass Assassin has a new clicker cork with a nickel titanium wire. It's called a Kwik Cork. It is very durable and I am impressed with it. I'll use this with one of Bass Assassin's new scented shrimp tied below. This makes a little noise and keeps the grass off the lure so I can cover more ground.

Last week we had a good trip with Joe Hoogendoorn of Corpus Christi. The trip was his birthday present from his brother-in-law. We were within a couple of miles of the JFK Causeway. Joe was on fire that day. He was using a Bass Assassin Crystal Shad. His first fish was a 28 inch trout. It was his personal best. Then he backed it up with a 27 inch red and two other nice trout. About that time his brother-in-law called and asked, "How's the fishing?" Joe said, "I'm doing alright, but I don't know about these other guys." He put it on us and was rubbing it in. We all enjoyed it and managed to catch some fish throughout the day.

Just recently I was fishing with some guys who were part of a huge forty boat corporate trip. My guys were Kent Nielson, Bill Pickard and Ron Pfeiffer. We were the only boat using artificial lures; everyone else had croakers and piggies. I was nervous, hoping to just keep up with the other boats. The day started off slow, we jumped around and found some small fish in Yarborough Pass in the flats and we even caught some flounder. I moved south and found some clearer water. We were drifting the rocks and using the trolling motor to work around them. My three guys were doing a great job casting and working it back in. Everyone had caught some fish, even Ron, who was on his first fishing trip.

We had to be back to the dock at 2:00 pm. Bill made one last cast at 1:15 pm, and unbelievable as it sounds, he hooked a 30-inch plus trout on a pumpkinseed sea shad. The fish nailed it. Someone had borrowed the dip net out of my boat, all I had was the Boga grip. I was hoping everything would go just right to get this fish in. He's bringing her in and we're drifting to the rocks. As he brought it up to the boat I reached down and locked her lip. Quickly, I was able to move the boat off the rocks. We took a picture and released her. So, with the last cast we had the biggest trout. I was happy with the results of that day.

My son, Captain Cliff Jr. has been running some great trips also. I've seen big fish and happy people. They've sent some thank you notes along with great pictures that I've included.

I would like to pass along a couple of tips:

-Being as quiet as possible while easing along with the trolling motor is one the keys to success in this business. It helps to keep the blade of your trolling motor prop sanded smooth. If you keep the little nicks and dings off your blades they'll make less noise and you'll be able get a lot closer to the fish.

-Terry Roberts of T. Roberts Optical has done something great for me again. As you might know, I already use The Costa Del Mar sunglasses with the vermillion lens. They really brighten up the low light of the morning and the evening for serious sight-casting. But in mid day I was squinting and needed to darken the view. Terry put a mirror finish on my sunglasses and now in the middle of the day my eyes are relaxed. I can see much better and I am really enjoying them.