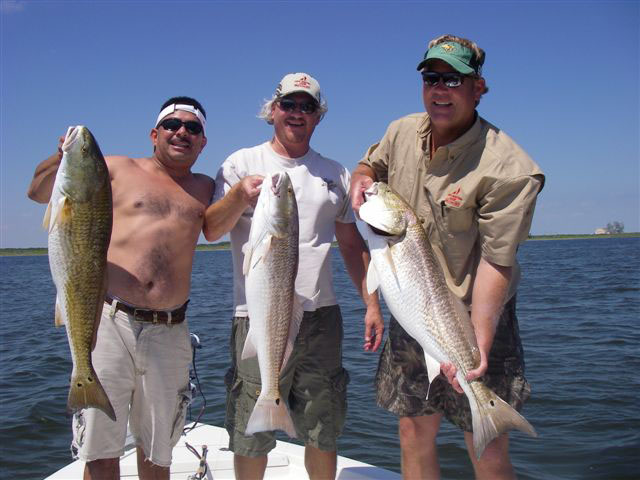 T his is Danny Ortiz, Scott Andersen and David Fry with the Fry Electronics group showing off the oversized reds they caught on a sight-cast triple hookup.
The fishing in the Laguna Madre is on the upswing. There has been good water flow coming in through Packery Channel and this has helped the current movement in the Intracoastal Waterway and along the west shoreline of the King Ranch. The water conditions in the Upper Laguna Madre are very good with clear water to be found almost everywhere and it is now slowly working its way to the south. There are a lot of small bait fish moving through the Intracoastal and along with them are the trout and redfish.

The water clarity down south in Baffin Bay and Yarbrough Pass have been poor. It has been dingy with the visibility of only twelve to eighteen inches at best. The key to fishing the off-color water is to use the topwater lures or clicker corks, something that will make a little noise. Move these lures slowly and cover the area well. It has been hit and misses though. We need a couple of cold fronts and north wind to help move the clearer water farther south.

The trout fishing down south has been rather slow, not yet showing as much improvement as we've seen on the north end. We're occasionally catching some big trout down there but after the long hot summer and spawning activity they are skinny and don't weigh much for their length. A couple that were twenty-seven inches long only weighed six pounds. With the cooler weather coming soon the trout will start their winter gorging and the weights will improve.

While we're not setting anything on fire in the trout department down south we have been enjoying excellent redfish action. As of this writing there are a lot of redfish schools to be found in the Laguna Madre. I expect to see these schools in the fall but what is unusual this season is the size of reds in the schools, some are running thirty-five to forty inches long. I imagine the red fishing has been so good this year because of the large numbers of small crabs we have been seeing. I've seen more crabs in the Laguna Madre than I've seen in many years, probably attributable to the plentiful rainfall. This has made the fishing with a gold spoon fantastic. The spoon is one of the good old lures that we seem to forget about as we have so many new lures to choose from now days. But, the spoons certainly have their place, especially now when the fish are on these crabs. I've tried the topwater lures but there has been a lot of floating sea grass again because of the high tides. So, the good old weedless gold and silver spoons have been the ticket.

A group of hunters/anglers from Fry's Electronics in San Jose, California came down for a blast-n-cast trip. They have a ranch for bird hunting near San Diego, Texas and the plan was to split time between shooting and fishing. They went on a dove hunt their first day and the next day they came over for fishing. There were twelve men and we divided them into four boats and like most groups they had a friendly competition going on for the biggest fish. My group was the only boat using artificial lures so my first hope was to just keep up with the other guides that were throwing live bait. We drift fished and caught dozens of trout and a ton of skip jack. The skip jack have really been thick. Finally we had a big trout on; she looked to be about twenty-seven inches long. She came up to the boat and made a couple of big head shakes and came off right in front of us. We were all disappointed as she definitely had potential to be the winning fish. We needed to be back to the dock at two o'clock and by now it was a little after one o'clock. I was getting ready to fire the boat up when I noticed a school of redfish. I could see them just under the surface and while the school itself was not large the redfish in it were huge. I eased over with the trolling motor and told everyone to cast at the same time. It worked and the three of them were hooked up and the reds were screaming line in every direction. The fishermen hung on with rods bent double and we were lucky to be able to bring in all three. The reds were all more than thirty-five inches long and the biggest one weighed twenty-two pounds. We tagged her and released the rest. Luckily, we came into the dock on time with the biggest fish! It was one of those days where you go from zero to hero in just a few minutes.

I'm looking forward to some cooler weather and the tides getting back to normal. When the cold fronts come through and the water level drops the fish will tend to bunch up and they won't be so scattered out. The bite will become much more aggressive. I expect the fishing down south to really improve with clearer water. When we are able to see the structure; the rocks, the sand pockets and the grass beds, it is a lot easier to target the spots where fish like to lay and wait to ambush their prey. One of my favorite things to do down south is to fish the deep rocks. But, you need to be able to see the shadows of the rocks so you can fish around them and avoid getting hung up in them. I believe we're just on the verge of some great fishing ahead.