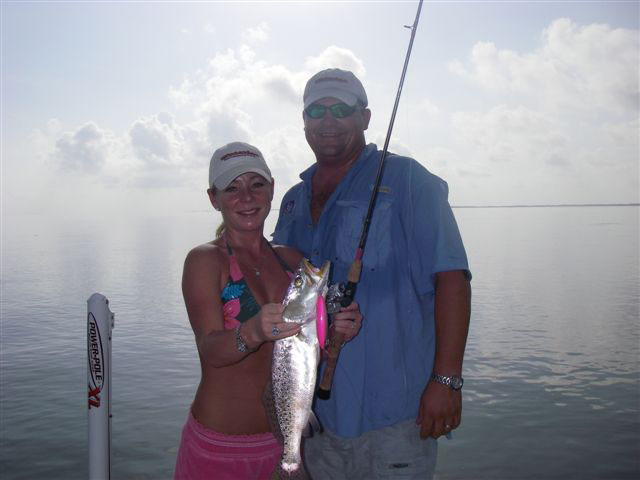 We've had some tropical storms in the Gulf that created some high surf and high tides. The storms didn't cause very much bad weather here locally though. There has been good current flow in the Intracoastal Waterway and in the Laguna Madre. This water movement along with the rain and cloudy conditions has helped the fishing. We've had more than normal rainfall and cooler than normal conditions.

I was wondering how all this rain was going to affect our bay system so I called my biologist friend Art Morris with Texas Parks and Wildlife. He said that our bay system is in good shape. In the Laguna Madre and Baffin Bay there are no major rivers and only a few creeks that bring runoff. So, even though we have higher than average rainfall adding freshwater it has come at the right time. With the fresher water the baby trout survival rate will be better than average. The trout population will benefit from the rain and cooler conditions.

One day in between thunderstorms I was scouting around and found water of very good color along the Intra Coastal Waterway. I stopped and ran the trolling motor just off the edge. The current was moving in pretty well. I used the Salt Water Assassin five-inch shad in Morning Glory on a quarter ounce leadhead. My standard jigheads are lighter but with the strong current I needed some weight. I dropped the lure off the edge and ended up catching several trout, two redfish and a flounder. It was nice to see the variety of fish and the action was good but another thunderstorm was looming so it didn't last long.

We have had a few good days of fishing in Baffin Bay when the weather allowed. One of the best was with Jimmy Burns of Waterloo Rods and his wife Whitney. The weather was very calm and extremely hot, the little breeze we had felt like dog breath, hot and damp. We headed south to Baffin and as I shut the boat down we could see large schools of baitfish on the surface. The water was so calm you could see everything that moved. It was one of those mornings when you can hear big trout sucking mullet off the top, perfect for easing along quietly with the trolling motor and watching for trout to blow up. Getting close enough to cast to them is not always easy though. Jimmy and Whitney both can handle a rod and reel and they were making those long casts that it takes to reach the fish from the boat. Sometimes I will do better out of the boat in these conditions because we are able to cover more ground. We had several trout blow the lure out of the water but they didn't eat it. Of course, those we missed seemed like monsters. We managed to catch several that were in the five to six pound range.

As I was moving around I would occasionally turn the trolling motor wide open for a few seconds just to see if it would spook anything and create a wake we might target. Sure enough it worked and I immediately cut the troll motor to a very low speed, that's when we saw the first big trout. She was just laying there right under the surface. We continued to ease along and in the next two hundred and fifty yards we saw at least a half-dozen big trout with this same tactic. It was very exciting. We were throwing Skitter Walk lures in pink and silver and Jimmy's Waterloo 6'6" HP Slam is the best rod for working topwater lures. It was a real pleasure to experience this day with such fine anglers.

Baffin Bay has long been known for its trophy trout. Being a full time guide for twenty-five years I have seen some significant changes in this fishery. It was only ten years ago that it was common to catch two double-digit trout on the same wade. I'm still seeing plenty of five and six-pound trout, but the top-end trout at thirty to thirty-two inches are no longer available as they once were.

If the twenty-six and twenty-seven-inch trout were released it wouldn't take long for them to grow to become thirty inches. There are more anglers today than ever, not only here in Baffin, but all up and down the coast. Texas Parks and Wildlife has made changes in the limits and size of trout that can be kept but I think we need to do more. We the anglers of Texas can control the number of fish being taken. We can no longer afford to fish the way we used to; fishing today should not be about big stringers or filling up the box. If this keeps up there won't be very many trophies left.

I think of trophy trout the same as trophy deer. If there are two hunters on a five thousand-acre lease in south Texas and they harvest one mature buck each, there will be plenty of big deer for the next year. Now take the same lease and add fifty hunters and they all take a buck; pretty soon there won't be any left. Baffin Bay is one of the last places on the Texas Coast anglers can go to catch big trout and I would like to encourage that we keep it that way. We all need to do our part and practice catch and release.

October is one of the best fishing months of the year. Before the cold fronts start coming and hopefully with no tropical storms reaching our coast, the weather will be beautiful with cool mornings and calm water. The crowds thin out during the week and the bays are very peaceful. I'm looking forward to a great month.