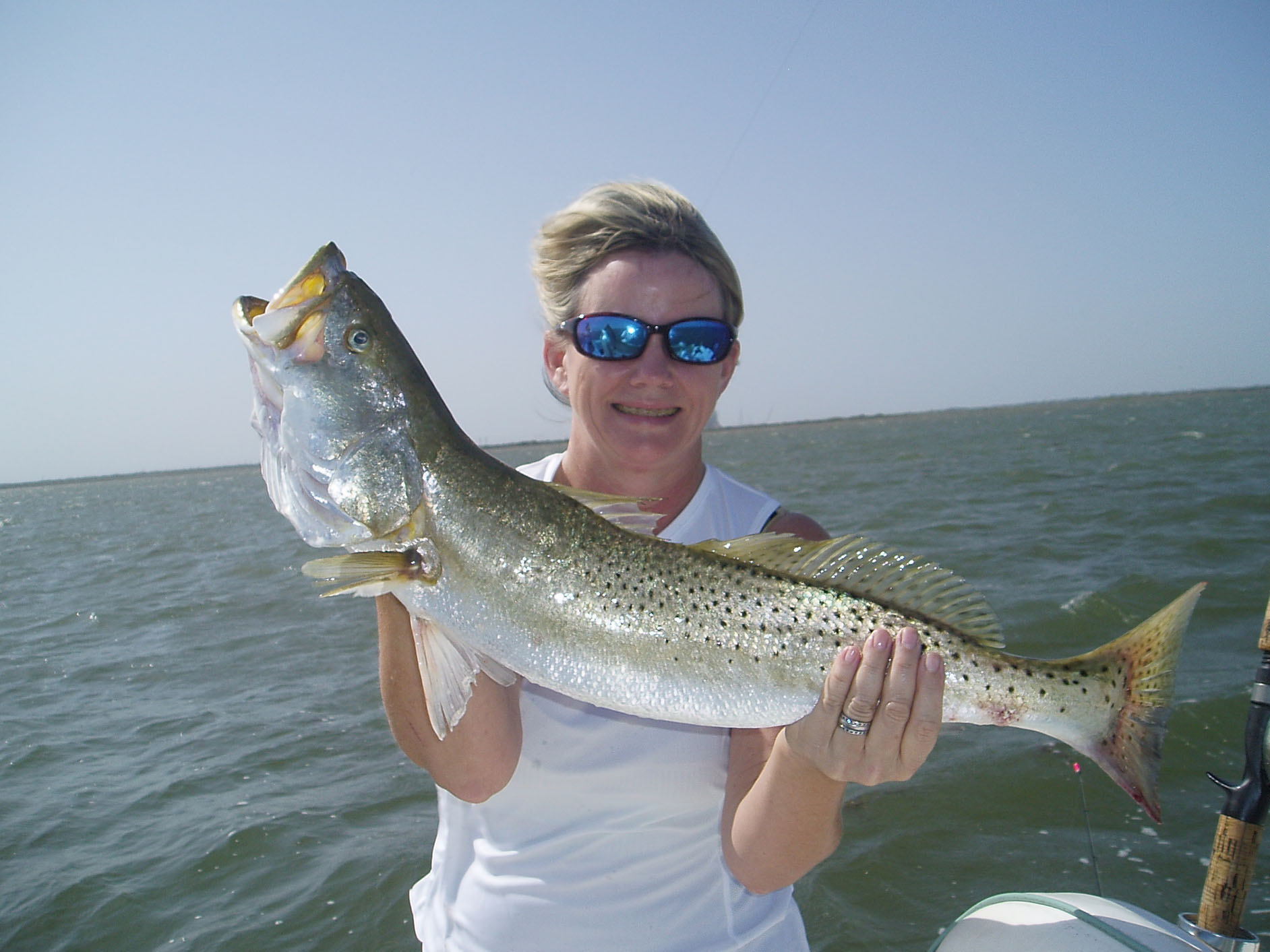 Maureen Manning from Houston with a 28 1/2
We have been enjoying an exceptional year with the clear water in the Laguna Madre and in Baffin Bay. The water temperature has been steadily on the rise and just recently it has reached eighty-eight degrees which is pretty much normal for this time of year. Predictably, the warmer water temperatures have slowed the trout bite.

Warm water is better suited to the redfish and we've been able to catch plenty of them. It would be safe to say that the redfish action has been saving the lure fishermen this past month. The reds haven't been shy; they've been nailing the Salt Water Assassin four-inch Sea Shad. This is the one with the paddle tail and the hottest colors have been plum with the chartreuse tail and chicken on a chain. When the grass gets real thick I have been relying on the 1/4-ounce Johnson weedless gold spoons, these things have been around forever and are still one of the best redfish lures you can tie on your line.

In the upper Laguna Madre, along the King Ranch Shoreline and in the Boat Hole, the trout have been decent in size, ranging from sixteen to twenty inches long. There has been a lot of floating grass so it's harder for the lure fishermen but the live bait fishermen are doing very well. A little farther south in Baffin Bay the larger trout are hanging in the deeper outside rocks where the water has more movement and is a little cooler. The outside rocks at East Kleberg Point have been consistent with good trout and reds. Tide Gauge Bar has been hit and miss recently but when I do find them there they are bigger trout.

There has been much talk going around recently of Alazan Bay and the clear water conditions that have prevailed there. The Three Sloughs area has also been holding good fish. I recently learned that alazan is an old Spanish word meaning reddish-brown. So, I'm sure that when it was originally named it was for the water color we normally find there. I expect it will turn red again eventually. As with most of the water in the bay system it changes in cycles through the years. Enjoy the clear water while it's here.

On around to the south shore of Baffin the landscape is changing. If you haven't been down there in a while there are now giant wind turbines along the Kenedy Ranch shoreline and south around to Rocky Slough. I am told that there are plans in the works for hundreds of these to be erected in Kenedy County. They are enormous, reaching four hundred feet into the sky. They are scheduled to begin generating energy by the end of the year.

The change in the scenery hasn't affected the fishing, though. Pretty much the entire south shoreline has been loaded with bait. We fished Rocky Slough at the north end along the deeper grassline and it was good early and then slowed down with the heat of the day. Following the shore down south to the Land Cut, the flounder fishing has been excellent the last few weeks. Nine Mile Hole has been crystal clear with pods of redfish everywhere. Yarborough Pass has had good action with small trout and a lot of big reds.

The cool fronts should be arriving soon. Cooler water temperatures and the north wind will really put the bait on the move. The bait starts moving out of the back of the sloughs and moves toward the front of Baffin Bay. The bait doesn't always follow the shoreline; it seems the trout and redfish that congregate there drive them out deeper into the bay sometimes. The baitfish become easy prey in the shallow water. The baitfish will move out into the center of the bay in the deeper water and follow the current into the Intra-Coastal. This is the time I will target the fish on the points. East Kleberg Point, Penascal Point and Starvation Point will really turn on.

These points jut out from the shallows toward the deeper water. The points are a natural ambush area, putting the bait in direct line of the waiting trout. These points are especially good following the first cool fronts of the fall season.

All in all, October should bring us some great fishing and I'm looking forward to the cooler weather and water temperatures.