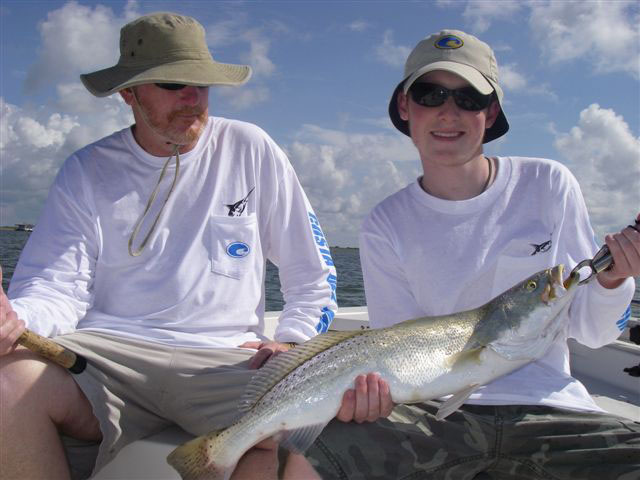 Jimmy Walker and son Tony with a beautiful Baffin trout.

The rain has finally let up and fishing has improved some in the Laguna Madre and Baffin Bay. This area recovers quickly from all the rain because there are not many creeks and rivers that empty into the bay system. Also, the water here has a naturally high salinity level so some fresh water isn't too bad. The weather is hot, the water temperature is in the high eighties and it has been difficult to find clear water for lure fishing. The average visibility is two to three feet. I've had to move around a lot to find clear enough water with the right structure and the right baitfish around.

The pattern has been to fish the deep structure and channel walls with current moving through. The fish stay close to deep water access this time of year. Packery Channel seems to have helped fishing in the upper Laguna Madre by putting a little current and cooler gulf water in the flats around the JFK Causeway and the Humble Channel. The fishing in Corpus Christi Bay has been good, too. Usually, this time of year I'm fishing in the Land Cut but, it's been slow and hasn't been worth the run down there especially with the price of gas. So, I've been fishing the deep rock structure in Baffin Bay.

This summer I have had several trips that included father and son teams and it has been great to see. Maybe the video games are getting old. These kids have been great fishermen and a pleasure to have aboard. On one trip, there were three adults and a seven-year-old boy. We were scheduled to wade fish but I wasn't sure how we could do it with this young man. He was no problem and he was all for wade fishing along with us. He cast artificial lures and worked hard all day. He caught and released a couple of nice trout all on his own. I was extremely impressed with his fishing ability at such a young age. I have included a picture of Rhett and his Dad, Jeff Trlicek.

On another recent trip, Jimmy Walker from Costa Del Mar Sunglasses, came down and brought his son Tony who is seventeen. We were drift fishing the deeper rock structure in Baffin Bay, using the trolling motor and working around the rocks. It was kind of slow in the morning; we only caught one or two trout off each structure of rocks. We were casting the Salt Water Assassin, 5-inch Shad in plum/chartreuse tail with the 1/8 ounce lead head. We cast toward the deep rocks and let it fall next to the rocks all the way to the bottom in six to seven feet of water. In the heat of the day the bite picked up. Tony caught the best trout of the trip that measured twenty-eight inches and weighed about seven pounds. Here's a picture of him and his Dad with the trout right before it was released.

In talking with Jimmy I learned that Costa Del Mar has made great improvements in frame material and in lenses. We both agree that the vermillion lens is the best for seeing fish underwater. My glasses are prescription Costa Del Mar that I have made by T. Roberts Optical here in Corpus Christi. I'm seeing the fish and bottom structure better than ever; they are amazing.

This is the time of the year that wade fishing on the beach is good. The surf has been flat and the water is clear and there is not much seaweed. Early on a calm morning recently I had the opportunity to fish with friend Joe Duckworth. The conditions came together just right for topwater lure fishing. We were wading in the first gut in knee deep water. We were casting the Mirrolure S7MR Series III floating twitch bait. This is a hologram with a blue back, chartreuse belly and silver sides. The fish can't resist it. It looks too good.

The bite was good and we caught several nice trout in the three to five pound range. It was a lot of fun and an enjoyable change of a pace. However, there is a shark and stingray factor to consider. I've been seeing a lot of stingray right on the edge of the water and I've had a couple of shark incidents where the shark ripped trout off of my line. The sharks will rip your lure off, too. They own the water, they are extremely fast and they will come up shallow. So, I do not recommend using a stringer.

In the month ahead I'm looking for tropical storms to play a factor in the fishing by bringing in high tides and a push of gulf water into the bays. This big push of water will usually improve the fishing. Until then, I will continue to target the deeper water, where there is current, structure and bait fish.