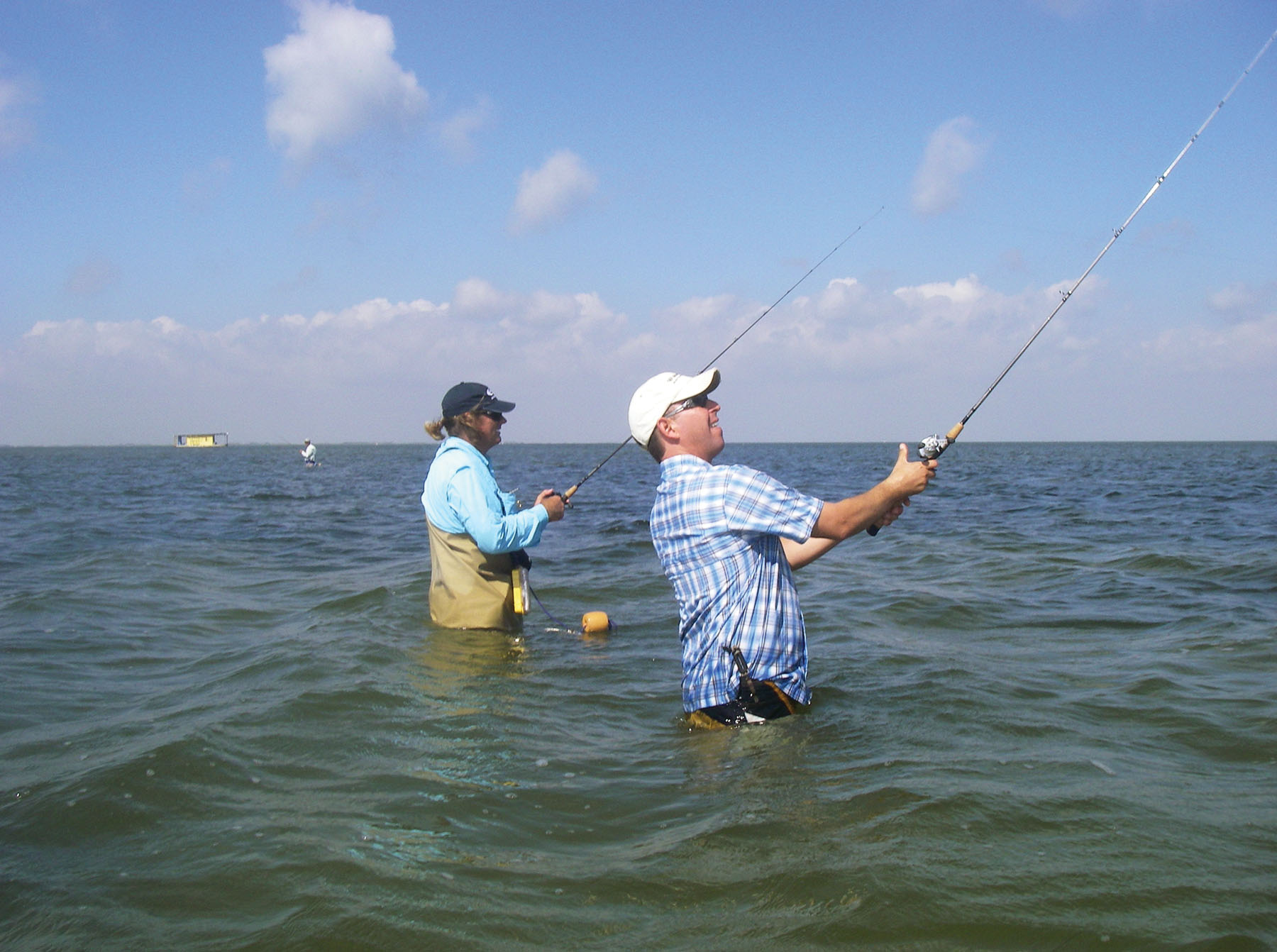 Scott Easterling and Rob Meza wading the sand pockets.
It has been a great summer of fishing with clear water and a lot of fish in the upper Laguna Madre and Baffin Bay. I've heard the good fishing story's from all up and down the coast with no complaints. This part of the coast was very lucky with hurricane Dolly. She gave us just what we needed. We got five to six inches of rain and the tide level was pushed up two to three feet bringing in a good flush of water from the Gulf of Mexico. This time of year it is common to get the tropical depressions. We just hope that they are not too destructive.

When the JFK Causeway was raised a few years back, they made some improvements for the water flow underneath it on the west end. Then a couple of years later Packery Channel was opened from the Gulf of Mexico to the Laguna Madre. Now when we get tropical storms there are good strong currents along the west shore and the King Ranch Shoreline. This has really improved our bay system for fishing. The high tides push up the dead seagrass from the shore and when the water falls out the shore is left clean. It is a healthier bay system when we get a water exchange, particularly in the heat of the summer when the water can almost get stagnant.

The spoil islands at Bird Island, Baffin Bay and Yarborough Pass have been especially productive with the high tides. The hot spots have been the spoil islands with the sand rings around them or the sand points. I'll start out wading in about waist deep water and wade up shallow to the island in the area that is normally dry land. The fish are right on top of the islands, up around the edges of the sand, feeding on crabs and bait they normally can't reach.

After the storm, when the water falls back out, I will target the sloughs. The sloughs are little creeks where the rain funnels into the bay. Baffin Bay has many of these sloughs. The shrimp and bait fish that have been pushed up into the new areas now begin to stream into the slough as the water level drops. The trout will feed during the night and early in the morning at the mouth of theses sloughs. They will be making slicks in the shallow water and slicks out deeper during the day. It has been easy to spot the trout feeding in the sloughs.

A week after hurricane Dolly the water was down to normal levels. I was invited by some surfing buddies to go fishing on their boat. This was an unusual treat. I got to step in the boat with my Waterloo rod and I didn't have to worry about anything else. Mike Weaver pulls up to the flats on the west shore. We could see a mixture of grass and sand. The four of us start wading with top water lures. The bite was good and everyone was catching trout.

Mike caught three trout over twenty-four inches long. He had the hot hand. He was hard to keep up with. He was catching the big ones and we were on the little ones. We were targeting the small sand pockets in the flats. The fish have been thick on the sand for this time of year. The hotter the weather the more they like the sand. Some of the sand pockets were big, up to fifty yards long. They were holding fish but, the bigger trout came from the small pockets of sand, about six to ten feet across. We would wade along and cast into the sandy areas, reel it fast, then pause it and the trout would nail it. Don't miss the first strike because very seldom would there be a second. The big trout lay in the grass next to the sand pockets and they are camouflaged. They wait for a baitfish to swim in the open sandy spot then ambushed them. The sand and grass provide a perfect ambush situation for a big trout.

The rocks of Baffin Bay have also been producing good trout and redfish. We've had some great days of fishing around the rocks with the trolling motor. The water is clear where you can see the structure and we can work all around them.

The hot lures this month have been the Saltwater Assassin's, Chicken-on-a-Chain and pumpkinseed with chartreuse tail. As far as other lures go, the bone and silver Super Spook and the Catch Five in silver have been the better ones. The trout are devastating them in the sand pockets early in the morning.

The fall is coming up and the fishing in the Intra-Coastal will start to improve with trout, redfish and flounder on the move. Look for the big bull reds to show up on the north end from Bird Island to Corpus Christi Bay. The boat traffic has been light in the Laguna Madre. It will probably get even quieter when bird hunting season begins. It's hard to beat this time of year. Fish in the morning and hunt doves in the afternoon. What could be better?