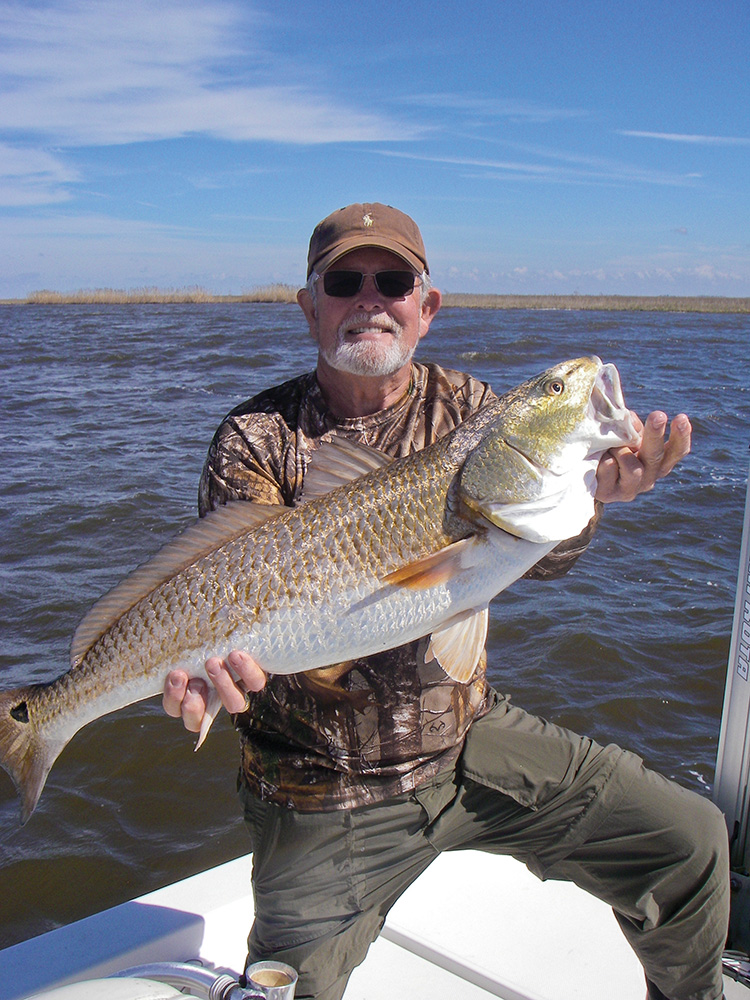 Lots of wind and lots of reds!

Well…so much for having to deal with gin clear water on Sabine. Thanks to daily rains locally and monsoons to the north of us that forced the Sabine River Authority to once again open the gates at Toledo Bend, we are back in our comfort zone as far as water clarity is concerned. Twelve to eighteen inches is considered to be perfect stuff, so the only concern short term is the quantity of unwanted fresh water yet to run downhill.

There is no point in wasting words on the “what if” factor, so let’s just deal with what is going on right now. The catching has been good and getting better for the big three. The redfish bite has been phenomenal, the trout bite has improved drastically, and a consistent flounder bite is just getting started.

Not unlike the past two years, we are not only seeing better numbers of flounder, but bigger fish as well. I still don’t understand how you can force anglers to basically keep only the female fish and expect numbers to improve, but they have done just that. Kudos to the folks that knew that approach would work!

The ship channel is producing the largest flatfish right now, but that will change very shortly as they continue to make their way into the lake and bayous. Hands down, the best choice of baits for the larger fish has been mud minnows and finger mullet, but a GULP! curly-tail grub easily produces the best numbers.

Rigged on a jighead heavy enough to compensate for the current, the GULP! baits are deadly in two to twelve feet of water. Chartreuse is the number one color, but white, pink and smoke are hard to beat as well. When the fish are holding tight to the shoreline, a horsehead jig with a small blade works even better than a conventional jig.

The redfish are everywhere so you can pick your favorite method of catching them. They are stacked around drains, schooling in the open lake, and running the shorelines flushing small shrimp, crabs and finger mullet out of the flooded grass.

The schooling action is absolutely a visual thing when it comes to locating them. Any bird activity, including terns, should be investigated with a long cast. If pelicans and gulls are working the same small area together, it is all but a guarantee that the reds are beneath them.

Should you choose to exploit the shoreline bite, I would still make an effort to start near the closest drain. That may prove to be as far as you need to go, and that bite is a bonus. Everything from tails to a crankbait will work. Topwaters, spoons, swimbaits, and single-spin spinnerbaits are deadly as well. An unexpected blow-up on a topwater is to kill for, but that is a little slower option for hunting the fish.

When you find these bank runners, plant the Talon or Power Pole as they seldom travel alone. It is easy to stay ahead of them by simply watching the wakes once they decide to move. If you are randomly trying to decide where to start, look for multiple egrets parked on the shoreline as well as redwing blackbirds nervously changing vantage points on the low hanging reeds. They are quick to take advantage of small shad that get blown out of the water by the red marauders.

I am both relieved and encouraged by the improved numbers of four- to six-pound trout that we have caught over the past two months. We are yet to consistently see the seven-pound-plus specks that we once took for granted, but the present bite is significantly better than we experienced the last two years.

Everything has been text book from lures to the most productive areas. I don’t personally throw as many topwaters as I once did, but both the She Dog and Spook have fooled some very good fish when I do. We are catching a lot of our fish with mullet imitations like the Fat Boy, Softdine XL and Catch V as well.

When opting to fish plastics, we are catching very good numbers of 16- to 20-inch fish on five-inch rat tail Assassins and Usual Suspects. We have also done very well, especially when hunting fish, with four-inch Sea Shads and Lil’ Johns fished under a popping cork.