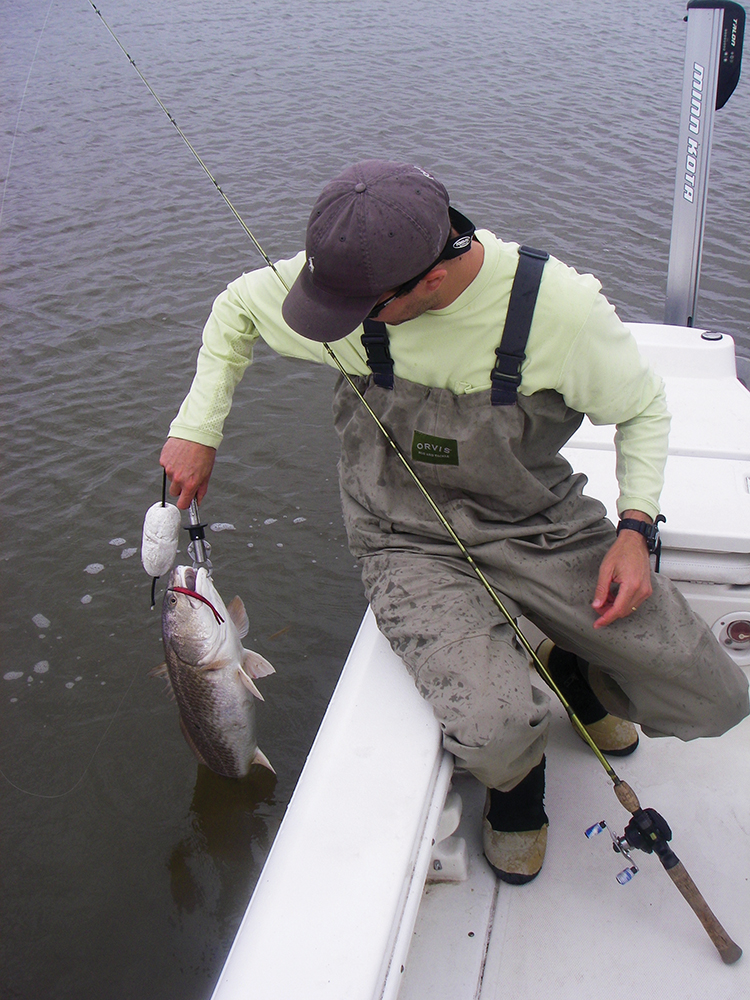 One more red weighed and released.

The turnout for the TPWD public hearing on February 28 to discuss a proposal to reduce trout limits from 10 to 5 fish proved to be as dismal as the weather outside the Port Arthur Civic Center. As expected, any support for the proposal was minimal at best.

After several of the anglers in attendance voiced their feelings on the proposal, there was little doubt as to why most were not in favor of lowering the limit. Basically, the general consensus was that anything taken away from them would never be returned regardless of how well the proposal worked and, as long as they were sharing the lake with another state unwilling to make the same changes their concessions would make little or no difference.

Any angler that does not reside in the immediate area or fish Sabine Lake on a regular basis has no idea how frustrating it is to abide by two sets of regulations on one body of water. The added expense of two sets of licenses along with different creel and size limits are the most obvious problems, but as visiting Bassmasters discovered, simply determining navigable or even posted waters bordering the east side of the lake is all but impossible.

Harvey and an unprecedented glut of fresh water caused the current trout problem…not fishing pressure. I still believe, however, that at least temporarily some changes are necessary, but no change will work as intended until every angler fishes under the same set of rules and regulations.

I was most encouraged by the fact that several of the guides that spend the majority of their fishing time on the south end had good reason not to share my concerns. They report that they are easily catching limits of small trout from the extreme south end of the lake to the jetties. They are equally quick to add, however, that trout over five pounds are rare.

There is no doubt that old age has eroded my “catching skills” but I can still cast and read my depth finder and neither skill has helped me much on the north end of the lake. Strictly out of frustration, I recently fished the south end three days in a row.

The water was no clearer down there but I did indeed catch the most trout I have caught in months. It was especially nice to make a cast and expect a fish to ambush my offering. The negative for me, however, was the fact that while I caught a lot of trout, very few were keeper-size fish. My largest trout might have weighed three pounds. Regardless of size, the highlight was the better numbers as that has not been the case on the north end thus far.

While the trout bite continues to be a challenge we have had no problem catching redfish. They are running the shorelines, hanging on the deeper breaks in the bayous and cruising the shallow flats. Spinnerbaits, five-inch Assassins rigged on 1/8-ounce heads and Usual Suspect swimbaits are all dependable choices, but we never give up on a spot until someone offers them a GULP shad under a cork.

I am now perplexed as to whether salinity is a depth thing or improves in pockets as we have located some short stretches of shoreline with no change in structure that continue to hold a few solid keeper trout regardless of rainfall and runoff from the lakes.

We are catching those trout wading and casting toward the open lake. Most of them are holding in four to five feet of water and there has been no indication whatsoever that they are present. Oddly enough, we didn’t start catching them with any consistency until we downsized our lures. We traded the Fat Boy for a Soft-Dine and the Catch 5 for a Catch 2000. Dayglow and pink are earning the most reps.

I very much hope that by the time you read this some of those trout on the south end will have decided to swim up north. Hopefully, their larger brothers and sisters will join them. Bait and salinity will play a big role in igniting that migration.

Dirty water has become the new normal for Sabine Lake virtually year round, but once you locate the fish you will find that it effects little more than your own confidence. Slow your retrieve down and change colors often rather than leave a promising spot. Pay attention to majors and minors.

Kids make every trip a success!