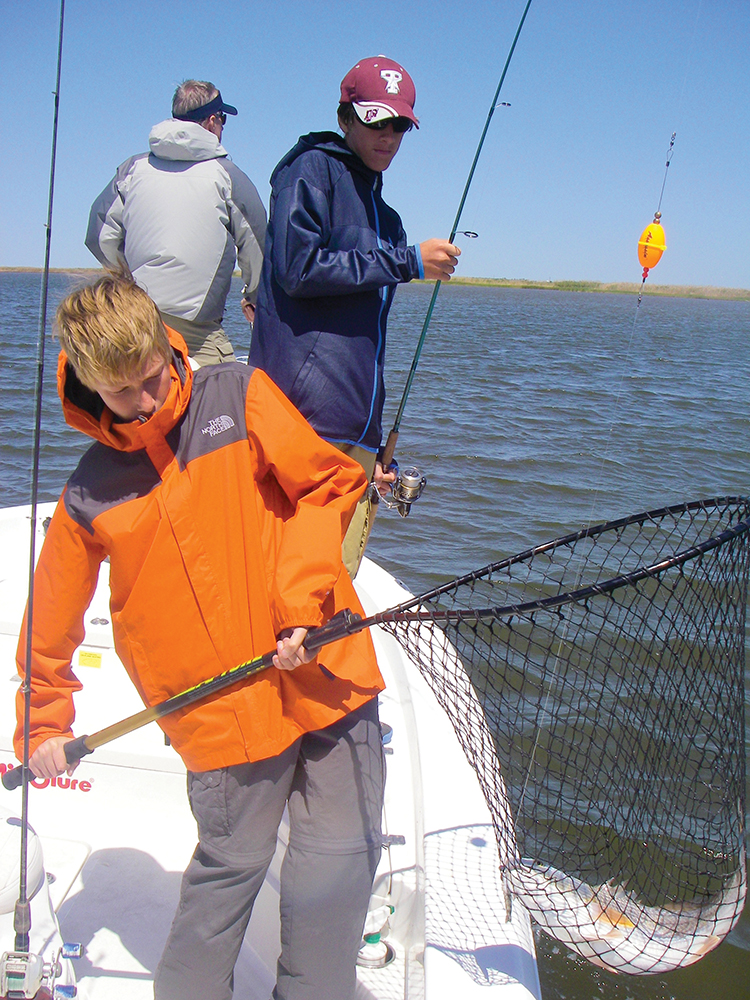 Cork and tail is never a bad choice.

Of late, both fresh and saltwater anglers have benefitted from Mother Nature’s latest game plan. Toledo Bend has been very low since early 2019, but quickly filled back up due to three weeks of non-stop rain in late February.

The long run of reduced water flow in the river and fewer local rains jump started salinity levels in Sabine Lake and the trout responded favorably to the change. The absence of any real winter weather has also played a role, but there may be a price to pay for a warmer Gulf come August or September.

The Sabine Game Reserve opened to fishermen March 15th and that anticipated event greatly expands the playing field for Sabine Lake fishermen. For the most part, that is basically a shallow water bite, but depending on the water level, trout can be caught as well as reds, flounder and bass.

Prior to the advent of redfish tourneys, the massive Reserve was exploited only by area anglers running light rigs with no need for a GPS to get them home again. Tower boats, the internet, the GPS, and cell phones have not only increased the traffic, but contributed to the damage of many of the pristine back lakes via “burning” the grass-filled sanctuaries in search of a pair of winning redfish.

Even if you elect to fish only the shoreline adjacent to the mouths of the bayous and cuts exiting the Reserve, there is still no more promising place to start your search than the mouth of a cut. You may have a short bumpy ride getting there, but the east shoreline will provide miles of protected water most days.

If you are the first to arrive, check out the mouth first for what may be the fastest bite of the day… if by chance you are blessed with an outgoing tide. Now that the Reserve is open, fewer anglers will compete for that coveted patch of real estate.

We expect to catch a variety of fish and for that reason we depend on a three-inch Usual Suspect, or either of the four-inch Assassin Sea Shad, Gulp Curly Tail, or Lil John rigged on a 1/4- ounce head to make it happen. The smaller offerings work much better and adding a scent only enhances your catching!

Should you arrive a little too late or find yourself between tide changes, Plan B may well prove more productive than Plan A. Most of the bait exiting the marsh runs the shoreline or seeks out the tightest grass on the nearest flat. Hungry predators are well aware of this habitual mistake.

We will initially start tight to the shoreline with the afore-mentioned lures as well a spoon or topwater. If we haven’t found the fish in a fifty to hundred yard stretch either side of the cut, we will start making long drifts in three to five feet of water. When you catch a fish or miss a strike…plant your Talon or Power Pole immediately.

Now that catching an eight- or nine-pound speck is a rare occurrence, we are no longer tying on the same lures we have counted on for years. Corkys and Catch 5s have given way to smaller crankbaits and plastics that swim well on an 1/8-ounce head. Maybe it’s just me…but I have never been a big fan of fishing a Corky out of the boat anyway.

Someone in my boat is usually drifting with a tail or Vudu shrimp under a cork, but our best bite lately has come when swimming a five-inch paddle tail like the Assassin Die Dapper or Down South baits threaded on a 1/6-ounce jighead. I can fish with confidence most days with red shad, bone diamond, chicken on a chain and purple/chartreuse. Once again, we add scent to everything but our topwaters.

This will be our first legitimate shot at springtime fishing with daily expectations of a consistent trout bite since Harvey. The big trout remain a mystery for the most part, but persistent local anglers have experimented enough throughout this tough stretch to know where to start their day for the big ones.

We are currently catching more oversized redfish than slot fish, but no one is complaining – thanks to the “pull” factor. Very few folks are targeting reds, but the same lures fished in the same areas work well.

I am fishing with three kids tomorrow……the oldest of the three is 82. You are never too old or young to enjoy the next bite!