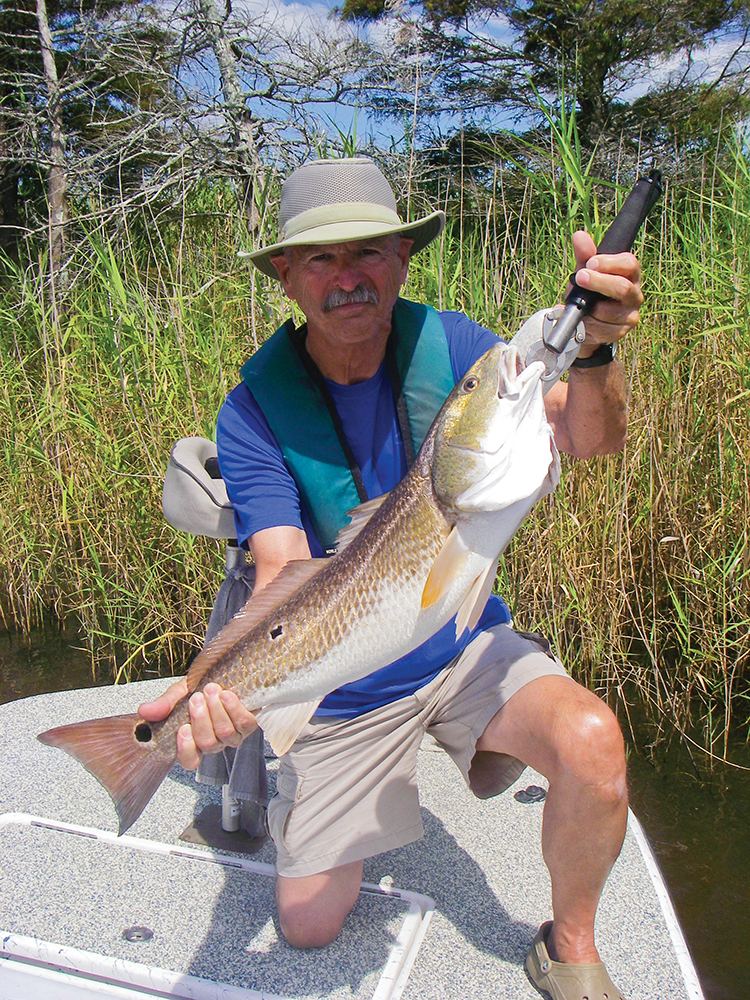 Plan B still works for redfish!

In a word, the catching on Sabine Lake can most accurately be described as T-O-U-G-H!

Even after countless hours of practice casts and burning gas, we have still been unable to definitively put a finger on what the heck has happened to our trout bite and what the heck it will take for it to recover. The few guides able to do more scouting than guiding continue to share their findings but have come up with no good reason for the abysmal bite.

Even the folks with Parks and Wildlife and local biologists have run short on theories as to the scarcity of trout all the way from the mouth of the Neches and Sabine rivers to the end of the jetties. We recently suffered through yet another brief rain event that once again flooded some homes just now recovering from Harvey, but insufficient salinity levels are not the culprit.

I am seeing dolphins in the ICW on a daily basis, while nearby live bait fishermen cannot catch a single trout or even a gafftop. While I hoped that his comment was borne of frustration, I recently heard one of the most veteran and best trout fishermen in our area state, “If I would have known this would happen someday I would have kept every legal fish I ever caught.”

He was an advocate for catch and release when no one even considered that as a part of fishing. He offered to take neighbors and kinfolk fishing if they wanted to learn to fish but refused to save fish he caught for their next fish fry.

While it has been hard on the bank account, the silver lining has been that it has been years since I have shared the boat with so many friends and guides looking for fish. We know what we are facing before we ever leave the dock, but it has rekindled my belief that there truly is far more to fishing than catching!

None of this is to say that we draw a blank on every outing. The biggest problem from a guiding standpoint is that there has been no consistency at all and the trout that we have found have been small. When the wind allows, we are occasionally catching fifteen to nineteen inch trout wading at first light (that bite ends pretty quickly) and the same size trout under small groups of terns and gulls on the south end of the lake.

Even Keith Lake, which serves as a safety net when all else fails, has been inconsistent at best. Hell of a crab bite, but slower than usual on both trout and flounder.

The water in the marshes on the east side of the lake is beautiful and on any given day you can still catch both redfish and bass running together. Even at that, Capt. Chuck says that he is yet to see the brown shrimp that he normally sees every time he buries his push pole in the mud this time of the year.

“It is weird,” says Uzzle, “I am so accustomed to hearing the clicking noise of those shrimp breaking the surface, but that hasn’t been the case so far and it is overdue.”

To some degree, the Galveston area has suffered through some of the same problems and while they have apparently recovered much faster, I found it interesting that TSFMag’s Captain Harp reported experiencing a common finding in his column last month.

His catching is obviously better, but he said that they were not finding their trout scattered all over the bays and that when you find them you would do well to stay put. We, too, have found our small schools of trout very concentrated. An area as small as a football field may yield ten to fifteen fish while you can’t draw a bite in the rest of the lake.

Surprisingly enough, our redfish have been doing exactly the same thing. They have been mixed in size but tend to congregate along one short stretch of shoreline. When you catch that first one, bury your Talon and don’t assume that the same bite is taking place in all of your old haunts.

I have most missed the usual amount of time spent fishing with kids out of school for the summer, but they tend to prefer catching over fishing. I have, however, enjoyed several unscheduled get-togethers where we have covered everything from repairing equipment to teaching Dad how to fish!