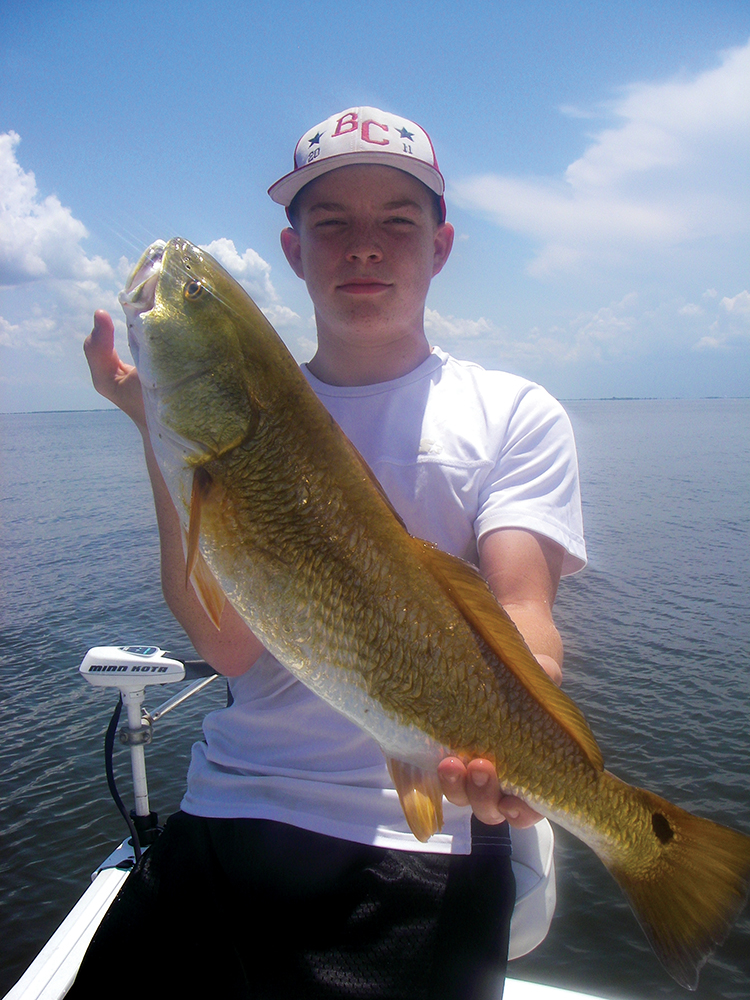 Redfish continue to provide the most consistent bite for Sabine anglers.

Initially, the greatest fear amongst local anglers after the five fish limit became a reality on the lower coast was not so much that they abhorred reduced limits, but that Sabine Lake might be the only venue on the coast still honoring the more liberal limits.

The consensus was that many Galveston anglers would readily drive another hour east just to keep more trout. When it was announced that the reduction would soon be statewide, even the local anglers that agreed with the need for change remained leery of any benefits for Sabine.

More generous limits of shorter trout had already enticed a few Texas guides to make the short run across the Causeway in order to stay in business. To heck with the fact that a keeper Louisiana trout was three inches shorter than its Texas cousin, forty-five fish for three anglers was more attractive than fifteen!

I perceived that assumption to be greatly over exaggerated, but I was wrong. Even before the changes could go into effect, Harvey unexpectedly relocated our trout population and, as predicted by the naysayers, parking a trailer at a Louisiana launch instantly required an early arrival.

The grind continues for Sabine Lake anglers, but many of those visiting anglers are now leaving home thirty minutes earlier to fish Calcasieu.  Numbers apparently do not outrank size and a shot at a better fish merits the extra gas.

On a recent stormy Sunday afternoon, I crossed the Causeway and stopped at launches all the way to Hackberry in route to a friend’s house to eat barbequed crabs. It came as no surprise that in every parking lot Texas plates far outnumbered those from Louisiana.

My host for the afternoon said that a pair of Texas plant workers caught three trout over seven pounds on the preceding Wednesday and it didn’t take long for the word to get back across the river. If that bite continues to improve, they may need to install another traffic light in Johnson’s Bayou!

A recent article in the Louisiana Sportsman, however, reported that the trout population may be dwindling in that state as well. They are still in the process of gathering data, but the initial numbers are decidedly low enough to warrant the attention of the Louisiana Wildlife and Fisheries Commission.

At a time when it is so difficult to even muster a handful of quality strikes, it seems impossible that there was a day when keeping a hundred trout was considered another so-so trip. Because they usually had more tiny white worms than bass, we cleaned them and gave them away to friends that obviously knew something we didn’t.

Netters and the anglers that drifted plastic worms over deep shell on the south end of the lake, however, knew that a more exciting bite existed. Boxes of five pound plus trout didn’t merit a second look and there is no telling how many trout in the seven to nine-pound class were unceremoniously filleted and eaten.

It wasn’t until Mickey Eastman brought his trout tournaments to Sabine that speckled trout attained their due respect. For those hoping to keep it a secret it was a disappointing revelation, but even the added pressure proved to be little more than an inconvenience.

Then came Rita, Ike and the infamous Harvey and copious amounts of additional fresh water generated by Rayburn and Toledo Bend continue to flush through the lake on its way to the Gulf. The added silt that now blankets most of the shell is easily stirred up by even the most modest of winds rendering “catching” an even more challenging feat.

If fishing dirty water is not your thing, I would highly recommend joining the parade to Calcasieu. Not that their water clarity and salinity level have not taken a hit as well, but it is stable enough to keep quality trout hanging around and that is not to be taken for granted!

Weather and tides permitting, there are three patterns that will yield at least a few fish on Sabine right now. Schools of small trout are occasionally showing up from the Causeway to the jetties. Slightly better trout as well as small flounder and slot reds are showing up on the North revetment wall on good tide changes. Outgoing tides are generating a mixed bag around the drains on the east side of the lake.

Hopefully, our kids will reap the benefits of enhanced conservation efforts that will quickly insure a brighter tomorrow!