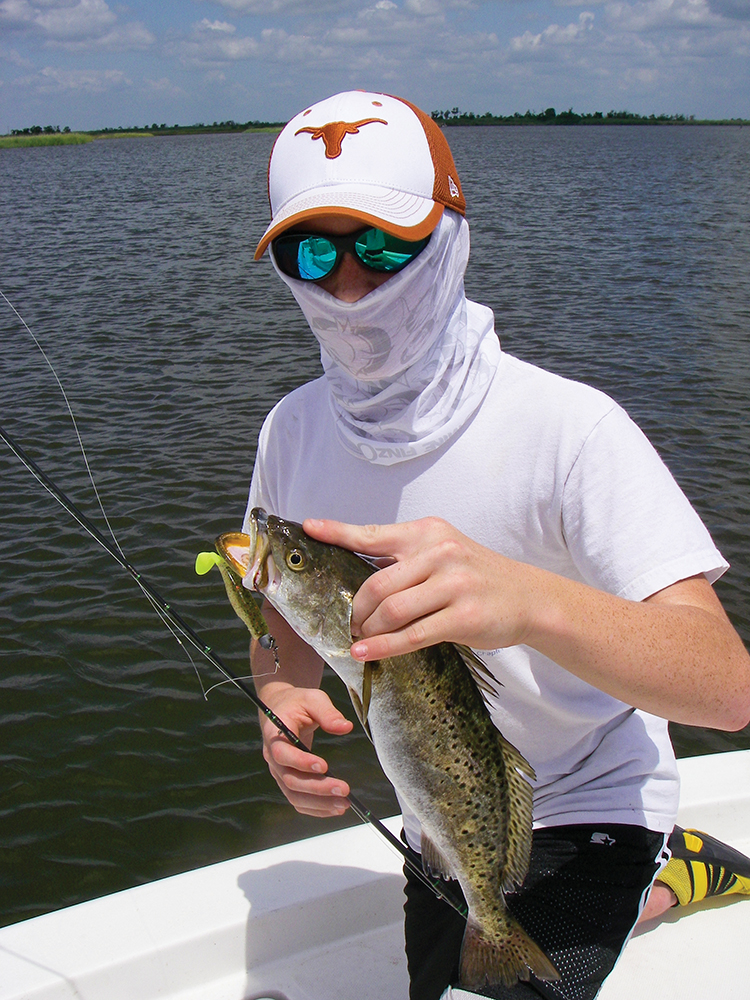 How to avoid the heat and Covid-19!

If you were new to this area you might well believe that it rains every day, but locals would tell you that it has really been pretty dry this summer. When it does rain it storms, but salinity levels continue to rise and the water clarity remains stable.

While the trout bite thus far has been anything but textbook, numbers and size continue to improve across most of the lake. Fishing pressure has increased as well due to more and more folks turning to the outdoors as a respite from the dreaded virus.

A stiffer south wind seemingly blows every day and it has kept the water stacked up in the lake and surrounding marshes. An unexplained run of stronger than usual incoming tides has also contributed to the glut of water. The saving grace is the fact that the extra water is salty.

Without a doubt, the most consistent trout bite has been, and still is, taking place from Light House Cove to the end of the jetties. When they are doing their thing, a lot of 16 to 20 inch trout are riding home with fishermen at the end of the day.

The ship channel has been very dependable, but the action gets even more exciting when anglers can slip through the boat cuts and fish the Gulf side of the jetties. Once you have decided which cut you will fish, and the wind usually helps with that decision, it is simply a matter of electing to work to the south or back toward the beach.

I am convinced that I have made the wrong decision more times than not. We still catch a few fish either way, but that mistake is easily confirmed when we get back to the landing!

A She Dog or Skitter Walk have their moments, but crankbaits and four inch Swim Baits get most of the playing time. Having said that, I cannot recall a trip when at least one of the people in the boat wasn’t catching fish on a four inch Sea Shad or Lil” John rigged under a cork. The cork set-up has also been very effective when drifting shallow shell in the lake, but those fish on average have been smaller.

I have been launching on the Louisiana side, not to keep more and smaller trout, but to eliminate a long uncomfortable boat ride most days. The parking lot is usually full and I don’t think most of those fishermen are simply trying to avoid a long boat ride.

I don’t have enough years left to learn how to more effectively fish the ship channel, but up until this year I have done well enough simply bouncing plastics off the bottom all the way from the shoreline out to the twelve-foot breaks. With the exception of a few healthy flounder, however, I was struggling to locate both trout and redfish.

When we unexpectedly caught a solid trout or two while quickly retrieving our swimbaits to make another cast, the light flickered a little and we switched to small-bodied crankbaits that run 8 to 12 feet deep, tied on 12 pound monofilament. We seldom catch just one or two fish when we locate them and expecting my next strike rather than hoping for one makes fishing more fun.

Color has been a difference maker thus far and the hottest colors for us have been Sexy Shad and gold with a black back. We are also cutting off the barb opposite the other two and losing fewer lures to the rocks. More often than not, they will simply float free when you quit reeling.

You have got to fish where the fish live and I am convinced that not doing just that is the main reason I am currently not catching more redfish. Capt. Chuck says he is finding a lot of slot reds in the flooded marshes, but I don’t fish that program. I do, however, usually spend a lot more time fishing the cuts exiting those marshes, but that tactic does not fit well with trying to exploit the trout program on the south end.

I look for that to change very shortly and I expect surface feeding schools to start hounding the shad later this month. When the lake is flat, it is not unusual to hear them before you see them!

No baseball and very little swimming has created even more fishing time for the youngsters and I am loving it!