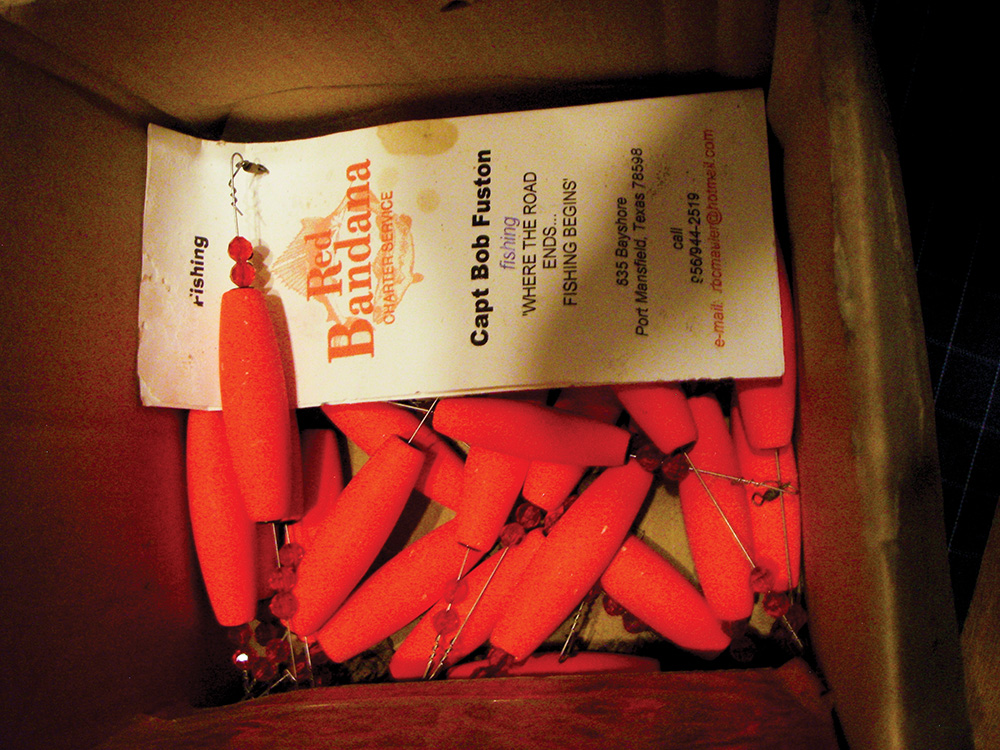 A reminder of a game changer for me! Luckily, they survived Harvey’s devastation.

I was recently digging through plastic containers that I still hadn’t unpacked since Harvey’s visit hoping to find a few more packs of bone diamond Sea Shads when I stumbled up on something of much greater importance.

Wedged in amongst a pile of folded hand towels and assorted caps was a weathered box of loose corks that I thought to be a casualty of the flood. My wife knew the whole story behind them and had miraculously taken the time to add them to the “Keep Dry” list.

These weren’t just any old popping corks. These were original Mansfield Maulers that Capt. Bob Fuston sent me back in 1985. I was guiding full time on Toledo Bend and part time on Sabine Lake at the time he sent them asking me to try them out on school bass.

I sent him a note saying they didn’t work for me and he asked that I give them a try on Sabine Lake rather than sending them back. He said that he designed them to help his customers more efficiently fish tails in the pot holes in the grass.

In truth, at that time I had never heard of Bob Fuston and his Red Bandana Charter Service, wasn’t really sure as to where Port Mansfield was even located, and even less sure as to how to fish his Mauler with no grass. A year later, a client that regularly fished with Fuston and was astounded that I had not heard of him, told me how he rigged it and suggested that I give it a try when fishing under the birds.

The rest was history. Ninety percent of the time, regardless of the time of the year, at least one person in my boat is fishing with an improved version of his Original Mauler. Titanium wire that won’t bend, a slightly larger oval cork for more buoyancy, clipping the top swivel to prevent line twist and adding weight to the bottom loop of the wire to make it easier to cast were minor tweaks that made it even more effective.

I could easily fill this magazine with the reasons for the changes as well as experiences that I have enjoyed over the years fishing upgraded versions of his original Mauler. I have even had clients that couldn’t catch a cold wreck magnum trout while fishing a Fat Boy under the Mauler, of all things. The upgrades also enable us to fish a tail rigged only on a 3/0 worm hook underneath it with great success.

No single lure or technique has had a more profound effect on my saltwater fishing than Fuston’s Mauler. As soon as I realized that I had been helped out by an icon of our profession, I packed away the corks, his brochure and a short note that he had written and vowed to never fish with one of the originals again. I am glad my wife knew the whole story!

Our redfish and flounder catching has benefitted from a pair of decent cold fronts, but the trout fishing continues to be a challenge. Most of the shrimp and baitfish are now in the lake and deeper bayous and it remains a mystery as to why the trout aren’t right behind them.

The most consistent approach, at least on the north end of the lake, has been wading shallow flats close to deeper water and staying put on an outgoing tide. She Dogs, MirrOdine XL’s and five-inch Assassins rigged on 1/16 ounce heads have all been productive choices.

While we are still not seeing any big trout, the average size has improved. The single biggest challenge has been catching fish in the same area two days in a row!

A lot of the trout under the birds are undersized fish, but slot reds are running with them as well. I don’t believe there is a better lure for hunting schooling reds than a Hoginar or Rat-L-Trap when they are not blowing holes in the surface, but they will hit virtually anything when they go ballistic.

The unexpected bonus on Sabine Lake thus far has been the flounder fishing. Numbers have never been a big problem, but we are seeing a lot of fish in the four pound-plus class right now.