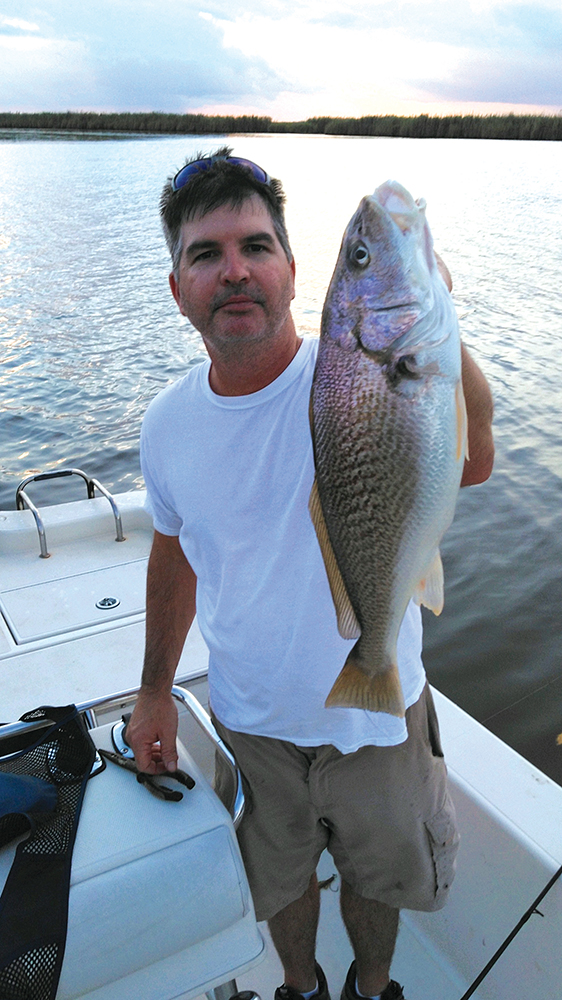 Albert Bates killed the engine, slowly walked to the front deck of his center console and lowered the troll motor, without bothering to even pick up a rod. The light north wind was just strong enough to slowly dissipate the early morning fog.

“Did you ever think that we would see this again on Sabine,” he asked while pointing at the dimples in the surface created by hordes of twelve to fourteen-inch trout hustling a shrimp breakfast. “I think it will be a long time before we ever see the numbers of big trout we took for granted, but this lake could be packed with solid keeper trout in a year if everyone would release their trout right now!”

Back to back fronts temporarily emptied the marshes pushing small shrimp and baitfish into a clear and salty lake during the last week of October. Overnight, small flocks of terns and gulls hovered over massive schools of undersized trout throughout every outgoing tide.

I have no idea how many keeper size trout we catch as we never give them a second look before carefully releasing them, but it would be fewer than five percent on the best of days. Catching fifty to a hundred trout in a morning’s time, however, is a given.

It appears at this point, provided we can dodge anymore catastrophic rain events, that our trout population will continue to grow. When the average trout is once again in the fifteen to eighteen-inch class, the five fish limit will play an even greater role in maintaining a robust fishery.

Unfortunately, the improvement continues to be at least minimally slowed by Texas anglers that trailer to the Louisiana side in order to keep both more and smaller trout. This practice could possibly change in the near future, however, as reports from the Louisiana Wildlife and Fisheries show a serious decline in their trout populations statewide.

Now, for the best news!

For the first time in the past two years, fishing is fun again on Sabine. If you are serious about helping out the trout, your fish fry will consist of redfish, flounder or sand trout, but they are there to be caught.

If catching fish is more important to you than eating them, load up the kids, arm them with light tackle and park in the middle of schooling trout all the way from the Causeway to the revetment wall. Four-inch Sea Shads or Lil’ Johns fished on a quarter-ounce head or under a cork will guarantee more bites than you thought possible.

The bonus has been that we are now finding more and more upper slot redfish hunting both for and with the smaller trout. Switching to a longer tail like the five-inch Assassin or a Down South somewhat minimizes the small trout bite and appeals to the reds.

Tying on a larger topwater is my first choice for duping reds mixed with schooling trout as every strike is a happening. Switching the stock treble hooks for single hooks helps when releasing a small trout with an attitude and it will not affect your catch rate with the redfish. Our best two colors have easily been speckled trout and clown.

The always reliable Hoginar and a Rat-L-Trap are good choices as well. Both are easy to cast long distances and can be fished from top to bottom depending on speed of retrieve. Once again, I replace the two small trebles on the Hoginar with a single 2/0 hook on the rear end.

Predicting the much anticipated flounder run has been a crap shoot for the past couple of years so I won’t go there while hoping for the best. Once again, a large number of Texas anglers make their way to Louisiana launces in order to keep more and smaller flounder, but the folks that have stayed in Texas thus far have caught some really nice fish. Because of the two fish limit they change their tactics a little and the result has been fewer, but larger fish.

The ship channel and the drains on the Louisiana side of the lake are dependable starting places. Gulp tails rigged on jigheads and three inch Usual Suspect Swimbaits work the best for me. I don’t think you can beat a live mud minnow or finger mullet, but catch and release is difficult once a big flounder inhales one of these offerings.

The trout are waiting on you and the kids!