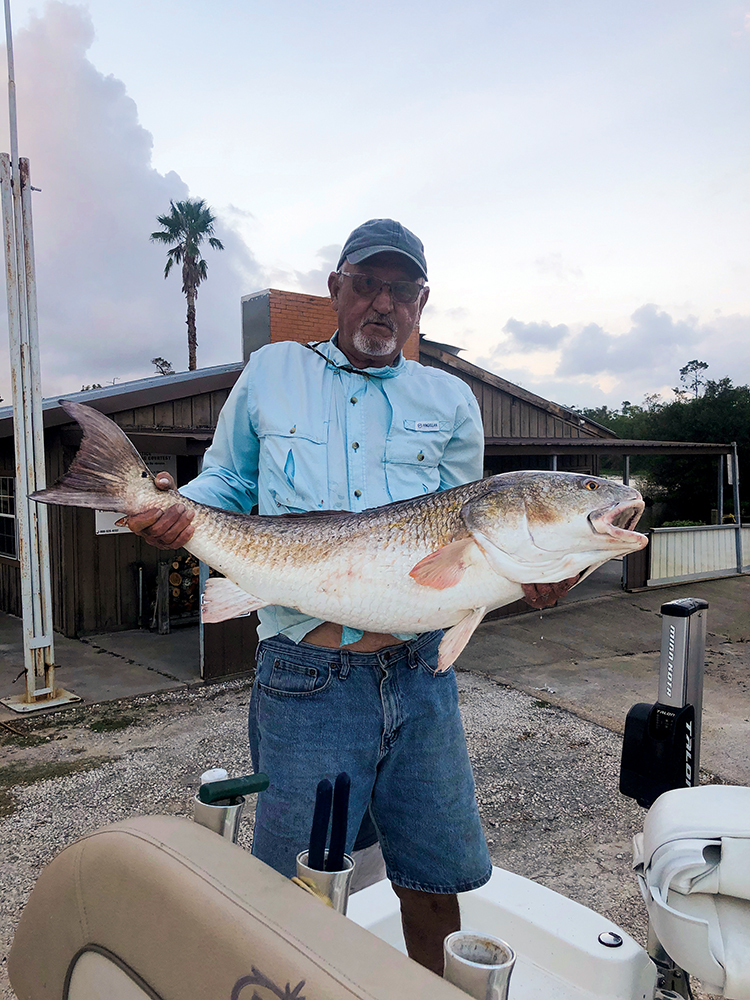 Capt. Johnny Cormier landed this monster redfish recently that might qualify as a new record for Sabine Lake.

I have just been blown away, undoubtedly a poor choice of words from a member of the Hurricane of the Month Club, by the incredible number of readers of this magazine that have either called or sent text messages in regards to our wellbeing.

I have never even met the majority of these folks which says a lot about fishermen in general. We also haven’t endured a single hurricane or major tropical storm that our editor and publisher, Everett Johnson, has not been one of the very first to call and offer help.

Because there was little left to blow down, thanks to Laura, and evacuation is such a hassle, we elected to hunker down and ride out the Delta storm. The trees were already gone, privacy fences were already piled on the nearest curbs, and the tarp on the roof was barely hanging on anyway. Fortunately, Delta roared through quickly and flooding was not an issue!

We now have a roof which makes the wait on contractors little more than an inconvenience. My life would be simpler if I could get my garage/boat house rebuilt and my wife is growing tired of the concrete/glue look for flooring, but that is just nitpicking in the grand scheme of things. Thanks again to all of you!

Ever since Harvey purged our entire ecosystem we have been agonizing over the absence of quality trout in Sabine Lake. The numbers game has rebounded well, but a trout over five pounds is still a happening.

Big flounder were also missing in action, but that virtually went unnoticed by anyone other than local anglers. With reduced limits it is difficult to determine how well the numbers have improved, but I have seen more flounder over five pounds in the past two weeks than I have seen in the past three years.

They obviously have to be there for us to catch them, but I am not too sure that the larger fish simply aren’t as crazy about plastic as we would like them to be. For the most part, we have always either tipped the lure with shrimp or soaked it with a scent when targeting flounder so it should have come as no surprise that every big flounder I have seen was taken on live bait.

Equally encouraging is the fact that these healthier specimens were caught not only in bayous and along the flooded shorelines, but in the deeper waters of the Intracoastal and ship channel as well. The choice of baits has been a toss-up between finger mullet and mud minnows while the most productive technique has been dragging a Carolina rig across the bottom.

A half-ounce slip sinker is a must for probing deeper water or keeping the bait near the bottom in moving water, but we never really go any lighter when fishing shallower water. It has been my experience that the trail of mud puffs kicked up throughout the slow retrieve help flounder zero in on the trailing bait.

It may well be the result of a major storm seemingly every month, but local anglers are also catching reds in the lake that just shouldn’t be there. Capt. Johnny Cormier recently won his tug of war with a forty-five inch redfish that crushed a small tail fished under a cork. It may very well have been a new Sabine Lake record as it was within ounces when weighed on uncertified scales!

The bird action has just exploded with the cooler water temperatures and a small flock of terns that won’t leave an area are as reliable as screeching gulls. You usually know before you make the first cast if it is trout or reds chasing the shrimp. If it looks as though someone is chunking bricks in the water you better loosen your drag.

By the time you read this we will have a much better feel for how much the larger trout bite has improved. We will be standing in waist-deep water rather than drifting over it.

Coffee Ground Cove and the flats south of Madam Johnson Bayou will initially tell the tale. Smaller tails like the Sea Shad and Lil’ John will take a backseat to slow-sinking Fat Boys, MirrOdine XLs and five-inch rattail Assassins rigged on one-eighth heads. She Dogs, Skitter Walks and Spooks are icing on the cake most days!

I am pretty sure that cleaning and inventorying fishing equipment with the kids qualifies as “classroom learning” and is far more enjoyable. No computer is required!