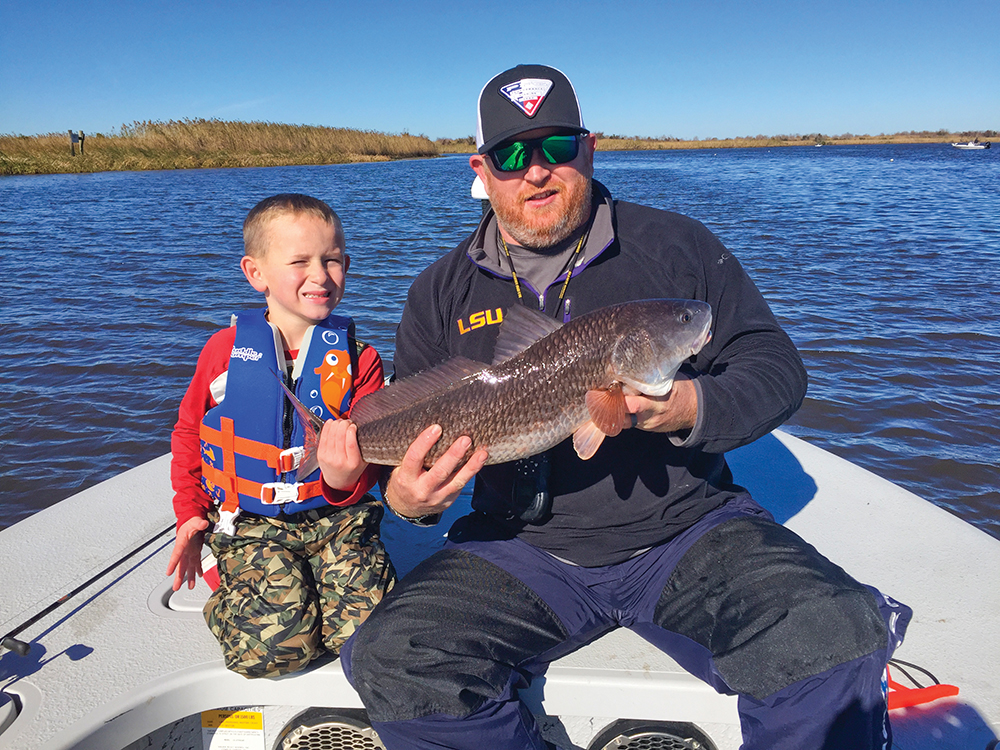 Catching was easier than getting young Wyatt to pose for the photo!

Mother Nature would be hard-pressed to be any more accommodating for Sabine anglers than she has been over the past two months. Rainfall has been minimal at the worst and winter has been virtually non-existent. With the exception of church on Sundays, I have worn long pants only twice this year!

The combination of both clearer water and warmer surface water temperatures

(63° on Christmas Eve) have made a steadily improving bite much easier to exploit. More fishermen are finally catching more trout and a higher number of them are fifteen to eighteen inch fish.

The only negative has been very much akin to a baseball team with a team batting average of .310 that hasn’t hit a homerun in two years. In spite of catching better numbers, the big trout just aren’t there, even for the handful of anglers that continue to target only big fish.

Years of experience were laid to rest virtually overnight thanks to three major flood events in a very short period of time. As the trout population continues to improve, figuring out the most productive patterns now includes relearning the bottom structure that tends to hold the fish.

You need look no further than Sidney Island, or what remains of it, to realize that a phenomenal amount of the scattered shell on the north end of the lake is now buried in at least a foot of loose mud and sand. In an hour’s time, I recently deleted sixteen waypoints that once marked reliable patches of shell that no longer exist.

At least from my own experiences and the fishermen I talk with, there is little doubt that there is a larger number of solid trout coming off the south end of the lake. Aside from the fact that the fish are obviously there, there has been more wading taking place and the larger trout have been opting for not only mullet imitations, but longer-bodied soft plastics as well.

At the same time, there is far more exposed shell remaining on that end of the lake and those opting to stay in the boat can still catch the heck out of smaller trout and reds, drifting in two to four feet of water. Swimming a five-inch rattail Assassin or a Down South paddletail rigged on a one-eighth ounce head has been the ticket for us.

Even after forty-plus years of guiding, I still do a very poor job of fishing the revetment walls and they are as hot as any area in the lake right now. I can catch fish when everyone else does, but I do a poor job of locating them on my own. More often than not, my biggest mistake is sitting on top of the fish casting toward the rocks.

Slicks and the route the baitfish are trafficking are the keys to consistently making the wall pay off. Therefore, while topwaters can at times be dynamite, the more productive tactic is usually to fish mullet imitations or crankbaits like the Swimmin’ Image parallel to the wall in deeper water. I have also seen the bite on the walls just crazy good at the same time that I can’t catch a fish anywhere else!

Thus far, and for good reason, the passes and the mouths of the bayous are drawing the largest crowds every morning and afternoon. The birds will work extremely hard at times, but they don’t have to be ratting out surface activity to catch trout. As long as there is good tide movement, the fish will hold in the same areas and can still be fooled.

Any fishing report is relative and the fact that so many smaller trout are coming off the north end is in great part due to the fact that most anglers are fishing smaller plastics that tend to dupe smaller fish. Four inch tails like the Assassin Sea Shad and Lil ’John have been much more productive than the longer tails.

Even when hunting fish with a swimbait, a three-inch Usual Suspect has worked better than the four-inch version. There is also no doubt that the shorter tails as well as a Vudu shrimp have been much more effective fished under a cork on an 18 to 24-inch leader.

The current bite may be a tad disappointing as far as big trout are concerned, but it is tailor made for youngsters and anglers more concerned with non-stop action than the next fish fry!