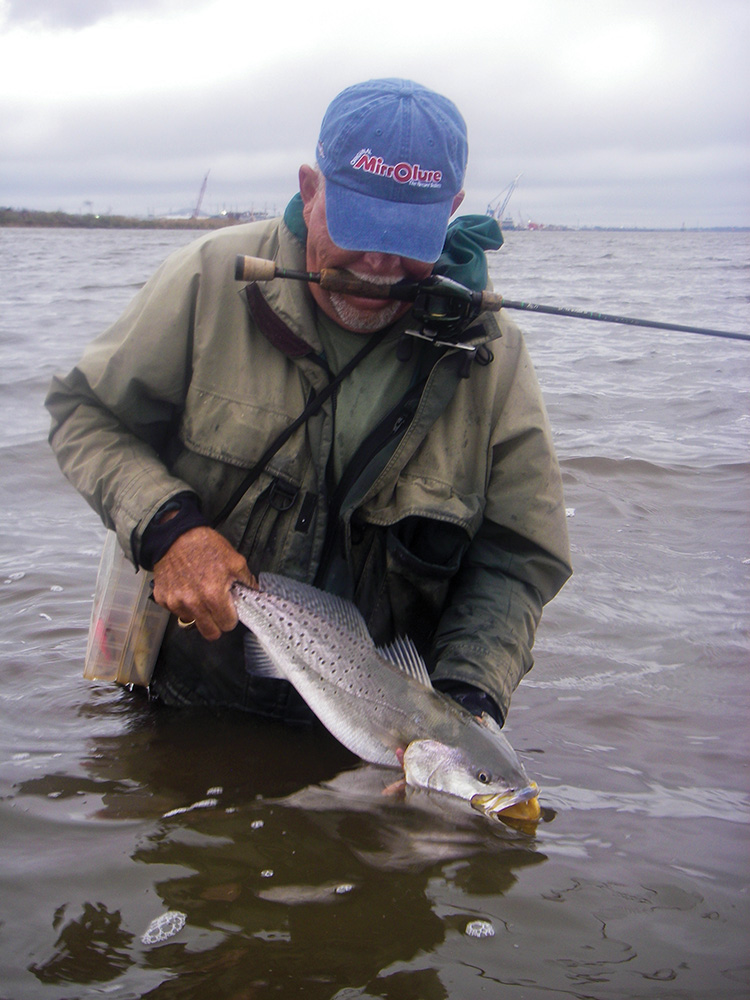 Trout rebound on Sabine Lake depends a lot on C&R!

I still cannot wrap my head around the thought that I am in anyway happy that another year of fishing has come and gone. At my age, not a single day on the water is taken for granted, but for the most part 2018 was a year of far more fishing than catching on Sabine Lake for me.

With each passing year, strictly fishing for the enjoyment of fishing and being on the water has been diminished by the self-inflicted pressure associated with putting folks on fish that they can catch. I have yet to figure out how to market hunting fish while constantly reminding the client that eight hours of wasted casts still beats a day at work.

So much for 2018…if you were a trout fisherman looking for even a little action on a consistent basis it was the pits on our lake!

The good news is that the trout bite continues to slowly improve and there are new patterns that will now work two days in a row. The gulls never ratted out school trout assaulting shrimp that were blown out of the marsh and a six-pound trout is a show stopper, but the bite in general has gotten better by the day.

Since there was no obvious fish kill following Harvey, there is no doubt that the vast majority of our trout were forced to ride the last of the saltwater out of town rather than simply holding up in deeper water and waiting for conditions to improve. The water was fresh from top to bottom.

The most consistent bite belongs to the waders rather than those that choose to drift shallow flats. Because most of the scattered shell is now covered with a few inches of silt and loose mud, even the smallest patch of exposed shell is like a magnet. Those small areas are best exploited by quietly homesteading them and waiting on the next group of trout to arrive.

The problem with drifting is that all too often you continue to drift while fighting a fish or scatter the fish before burying the Talon. If wading is not your bag, you are far better off quietly drifting away and returning to plant the anchor in a more advantageous position.

We have located more of these premium patches of shell on the flats between the north tip of Pleasure Island and East Pass than anywhere else. Do not give up on them should a brief bite slow down or even stop. As long as the tide is in your favor, more trout will soon find your patch of shell. Beyond all else, plan to be on your favorite spot during a solunar major!

This is the one time of the year that my first choice of lures is invariably a Corky. Smaller bait fish are no longer available and larger trout undoubtedly target unsuspecting mullet. Everyone I fish with has a superior retrieve when fishing the Fat Boy or Softdine XL than I do, but thus far I have done much better fishing both lures on a faster retrieve than I usually incorporate. That will undoubtedly change as the water continues to cool down.

It is also a mistake to pin your hopes exclusively on the Corky. If a bite stops I will switch to a five-inch Assassin rigged on an 1/8-ounce head before calling in the dogs. I have also found them eating tails when they wouldn’t touch a Corky. Downsizing can make a difference as well and both the Lil’ John and four-inch Sea Shad have worked well.

Another pattern that is slowly rebounding is drifting the north revetment wall. The most common mistake made when fishing this area is sitting on top of the fish while casting toward the rocks. Most of those guys walking the rocks are casting towards you!

The Fat Boy is a winner for this type fishing, but so are a slew of other choices. Plastics are always a viable choice as are Catch Fives, Swimming Images and even topwaters on the warmer days.

Redfish greatly improved their status this year as they were undoubtedly the saving grace for fishermen that hoped to end the day with a fish fry. They are where you find them and that ranges from the depths of the ICW to marsh drains on the Louisiana shoreline.

The future of fishing is all about sharing it with kids. They make every trip more enjoyable!