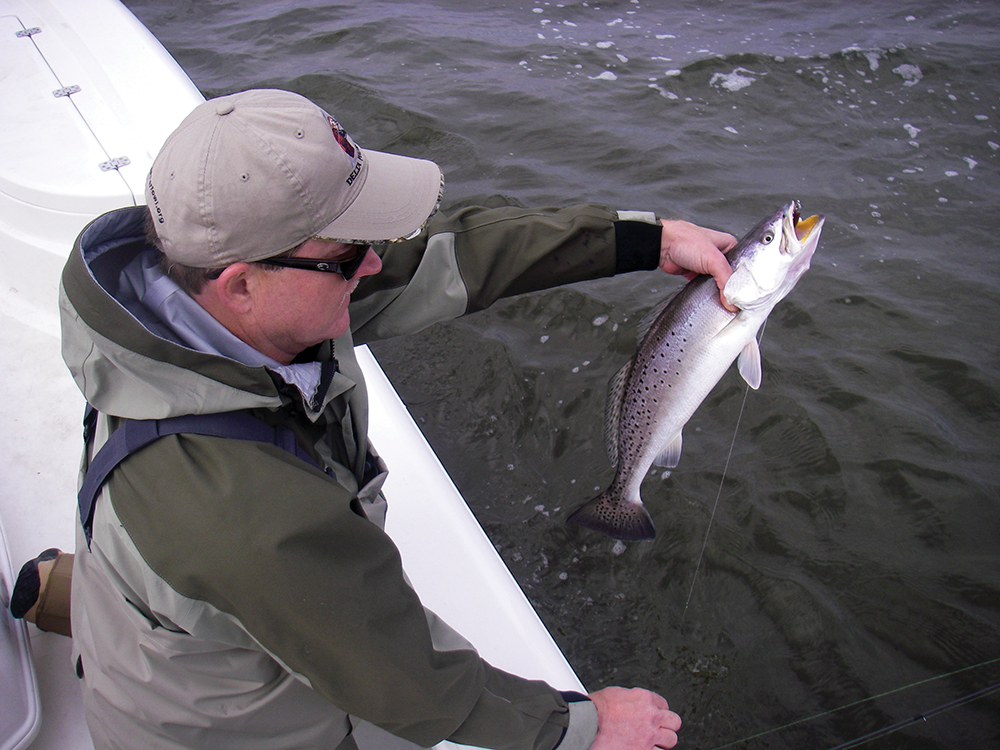 Another solid trout for next year!

Prior to Harvey burying most of southeast Texas under an unthinkable 48 to 60 inches of rain, this was undoubtedly my favorite time of the year to chase magnum trout on Sabine. On any given morning, regardless of how inclement the weather, you could realistically expect multiple shots at five- to seven-pound trout while possibly even duping a fish in the nine-pound class!

Once word finally leaked out that the incredible fishing was more than a rumor, visiting clients from the Houston area paraded eastward morning after morning. Twenty-four-hour fast food joints and convenience stores along I-10 were packed in the pre-dawn hours with determined fishermen.

Almost to the angler, if he was towing a boat he was headed an extra thirty minutes east to Big Lake, otherwise his group had a Sabine Lake guide booked. Big Lake was possibly even more prolific, but very few guides working the Cajun hotspot bought into the benefits of wading!

I could not be happier to see the improving numbers of ten- to twelve-inch trout that we have seen on Sabine over the past few months, but Lord only knows what happened to those trout that made you impervious to little or no sleep and frozen fingers.

Based on the average size of the trout that we have caught wading thus far, the youngsters at least know where and what they should hunt when the surface temperature dips below 60°. We have experienced no freezes and only a day or two in the high-30s, but it has been cold enough to push those smaller trout up on the shallow flats near deeper water in search of finger mullet.

I was forever convinced that a bulkier Corky Fat Boy or larger topwater like the Super Spook minimized the smaller trout bite, but they apparently like those same lures as much as their parents do. They will fold up a Fat Boy or Softdine XL cast after cast, and bounce a topwater around until they finally fail to avoid one of the treble hooks. The catching remains as much fun as it has ever been, but the “big trout” magic is on hold.

After two years of wondering if I would even live long enough to see the trout return to Sabine, I can now exhale and hope that the big fish bite will rebound quicker than expected as well. Too many anglers continue to take advantage of the more liberal Louisiana size and creel limits, but “no netting” should more than compensate for that over the long haul.

The biggest question for local anglers that couldn’t care less about hustling smaller trout or at the very least, keeping any, is what is going on with the flounder bite. We took another major hit when Imelda recently parked over us, but prior to that we were catching excellent numbers of smaller flounder.

While the numbers have fallen off we have continued to catch a few very solid flatfish, but the much anticipated annual run has just not materialized. Biologists contend that warmer Gulf waters for the three years prior to 2018 had a negative impact on the annual spawn, but regardless of the reason, the bite has been disappointing.

The water in the lake could not possibly be in better shape than it is right now and that greatly expands our playing field. Salinity levels are more than adequate all the way to the mouths of the Sabine and Neches and we have two feet of visibility across most of the lake.

A big north wind occasionally keeps us pinned down on the north end, but that has not been a problem as far as the catching goes. We are also finding excellent numbers of slot reds mixing with the small trout and their ability to crush a lure and peel drag works for me. If you feel the same way, try working the shoreline in Coffee Ground Cove or behind Sidney Island with a four-inch Usual Suspect or Rat-L-Trap. The trout don’t like either offering as much as some other choices, but the redfish cannot resist either lure.

The same two lures work equally well when fishing under the birds in the open lake, as does the venerable Hoginar. If you find yourself in the middle of a school of reds, just leave your Hoginar lying on the bottom rather than retrieving it and hang on.