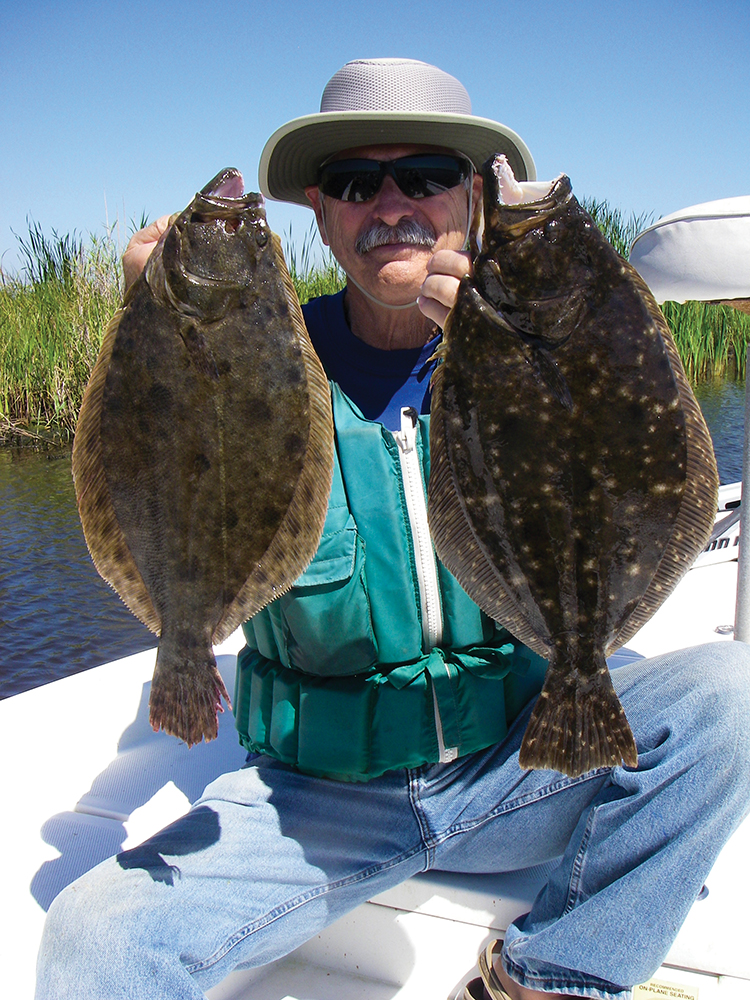 No one complaining about the size!

On Monday before Thanksgiving, Jim Hughes and I waded back to the boat with seven solid trout and the bite hasn’t slowed down since. While that modest catch admittedly fell short of any rave reviews, it was still significant to me for two reasons.

The first being that all seven fish were in the 18- to 20-inch class and we caught and released at least a dozen more that would have been solid keepers as well. We had hoped to catch three redfish for an overdue court bouillon , but the unexpected trout bite changed the menu.

Secondly, that was the first time since Harvey purged the Sabine system that I have caught that many solid trout wading on a single trip. Between all of the fresh water and my diminishing fishing skills, catching keeper trout has been a struggle at best!

With the exception of one week of steady, but not frog-strangling rains, it has been dry around here and the fish are apparently as pleased with the stable conditions as we are. That enables us to fish more water with confidence between fronts resulting in more helpful information via local anglers.

We have waded flats and shorelines from Rabbit Island to just south of Willow Bayou and found at least a few good trout at every stop. It has not been unusual to find them in very shallow water at first light and only a few feet deeper throughout the day.

When they have been feeding tight against the bank, schools of finger mullet have been present on the surface as well. I enjoy even the most half-hearted blow up on a topwater, but I have been hard pressed to fish anything other than a five-inch Assassin on a one-eighth ounce head or a MirrOdine XL. As soon as that first six-pound plus trout ambushes one of those two lures, however, it’s back to a slow-sinking Corky Fat Boy.

The bite has been good enough of late that proven areas like Middle and East Pass are once again drawing a crowd, but they can still be dynamite when the traffic is light. The most popular approach is to bounce a four-inch Sea Shad or Lil’ John along the deeper breaks, but we also catch a lot of Plan B fish on three-inch Usual Suspects when nothing else will work for us.

Flounder and redfish are equally fond of the little swimbait and that enhances your opportunities when the trout bite is slow. Most days, regardless of water clarity, we get it done with two colors, Bunker Shad or Morning Glory.

As good as these programs have been, we still spend at least a little time most days drifting water depths of three to five feet water with a cork and smaller soft plastic. Coffee Ground Cove has been a good choice for this technique as have the flats between Stewt’s and Pleasure Island. Regardless of what you choose to fish with at the time, the cork set up usually keeps both the kids and any novice guests in the hunt.

Redfish are an expected bonus when fishing the open flats with the cork. Keep your eyes and ears open for terns that refuse to abandon a relatively small patch of water. They might be ratting out trout, but more often than not they are right behind schooling reds. There is no wrong lure as long as you can reach the school!

I have been so excited over the more user-friendly trout bite lately that I have all but ignored a very decent flounder bite for the past month. You really can’t get a feel for the numbers with the reduced limits, but the size factor has been off the charts.

Some really good flatfish are coming off the north revetment wall and marsh drains on the east side of the lake, but the largest flounder I have personally seen have been caught by live bait fishermen fishing 10 to 12 foot breaks along the ship channel and Intracoastal Waterway.

It has been a long time since I looked forward to filing a positive column and the only thing that could make this one any more enjoyable would be reporting that our bragging-size trout were back in the river and the lake. I am once again confident, however, that it will happen in the not too distant future.

Remember…..any day spent on the water with a youngster is a great day!