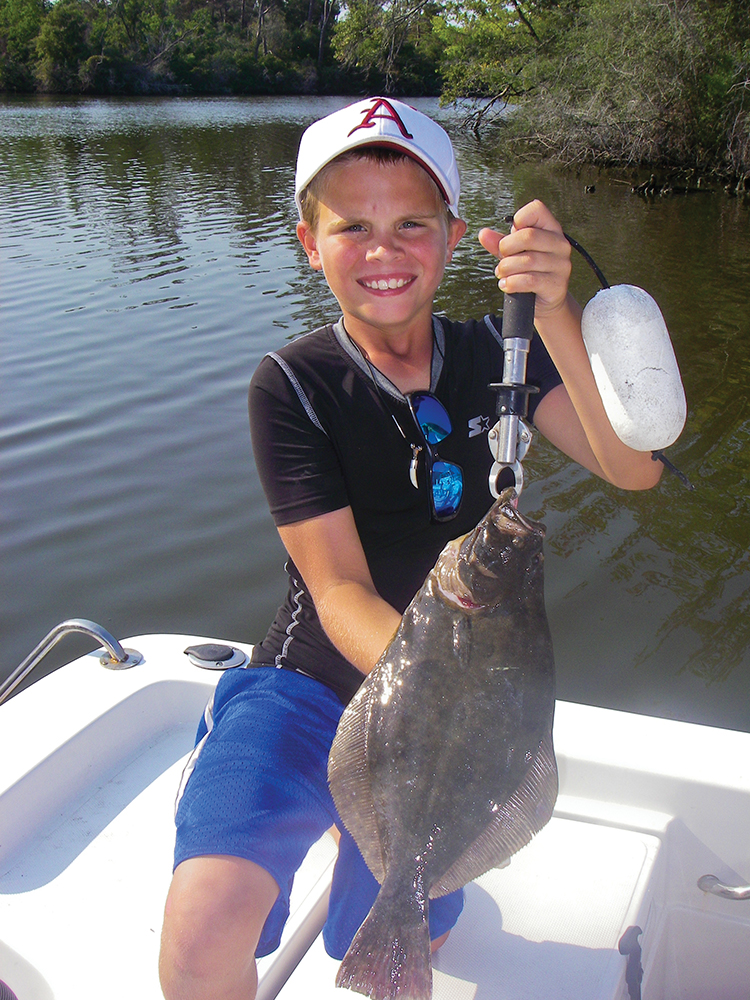 Kids and flounder go well together.

A steady twenty-five mile per hour southwest wind combined with driving rain that refused to lighten up for the better part of an hour forced yet another cancellation before we could even launch the boat this morning. We waited it out until the suggestion of breakfast at the Waffle House sealed the deal. It was still raining when we paid our bill.

While our “catching” standard has reached a new low over the past year, I am pleased to report that the wind has been a bigger problem this past month than reduced salinity. Angler confidence takes a hit when the wind churns the water into the color and consistency of a day old chocolate shake, but it doesn’t force the trout to pack up and leave.

Our salinity level has actually improved some and we are now finding better numbers of small trout all over the lake. It hasn’t been a bite that keeps you up all night in anticipation of your day on the water, but it is definitely a step in the right direction.

We are still at a point where any realistic hope of keeping a limit of trout requires launching on the Louisiana side of the lake, but even catching trout of any size is a major improvement!

Another negative effect of Harvey’s impact that has gotten little or no ink is the fact that it covered the bottom of the entire lake in a thick layer of very loose mud. That unwanted sediment not only buried much of the scattered shell on the north end of the lake but enables even the lightest of winds to quickly eliminate any clarity at all.

The clearer water most days is to be found on the east side of the lake from Blue Buck all the way to the jetties. For that reason alone you will also find most of the daily fishing pressure. The most dependable bite has been provided by schools of surface feeding reds that are not difficult to see or hear from long distances. They are usually immediately scattered by an armada of desperate anglers, but quickly show up again for the more patient folks.

I haven’t found a lure they won’t hit, but a heavier offering will get you in the fray quicker. Because the majority of these fish are oversized, you are seldom able to win your initial tug of war before the fish go down anyway.

I seldom fish a rod action heavier than medium light, but I have found these reds best fished with a seven foot medium or medium heavy Laguna stick. The faster action and added backbone not only help with the hookset and controlling the fish, but more easily delivering heavier lures as well.

Color choice depends on water clarity to some degree, but when we are not fishing a chrome Hoginar, Space Guppy and Morning Glory have been very good colors in a four-inch Usual Suspect. A Gulp body on a three-eighths ounce head works equally well, but there is little need to waste your Gulp on these brawlers!

The Catch 2000, Swimming Image and MirrOdine XL have been the most productive lures when fishing both walls. Live shrimp fished under a popping cork is never a bad option.

I know it’s late in the year for patiently cranking on a Corky, but a pink or Day Glow Fat Boy continues to produce the largest trout for the waders. I recently saw a rare seven pound trout taken with this approach and while they are few and far between. The majority of the trout caught in the four- to five-pound class have been caught on these imitation mullets.

Maybe the best news of all is that while we are catching fewer big flounder as of right now, the numbers of smaller fish have been incredible. They are stacked up along the shorelines and will readily hit a Gulp curly tail or small tail.

I am encouraged by the improving bite as we move into the summer and very much look forward to sharing it with vacationing kids!