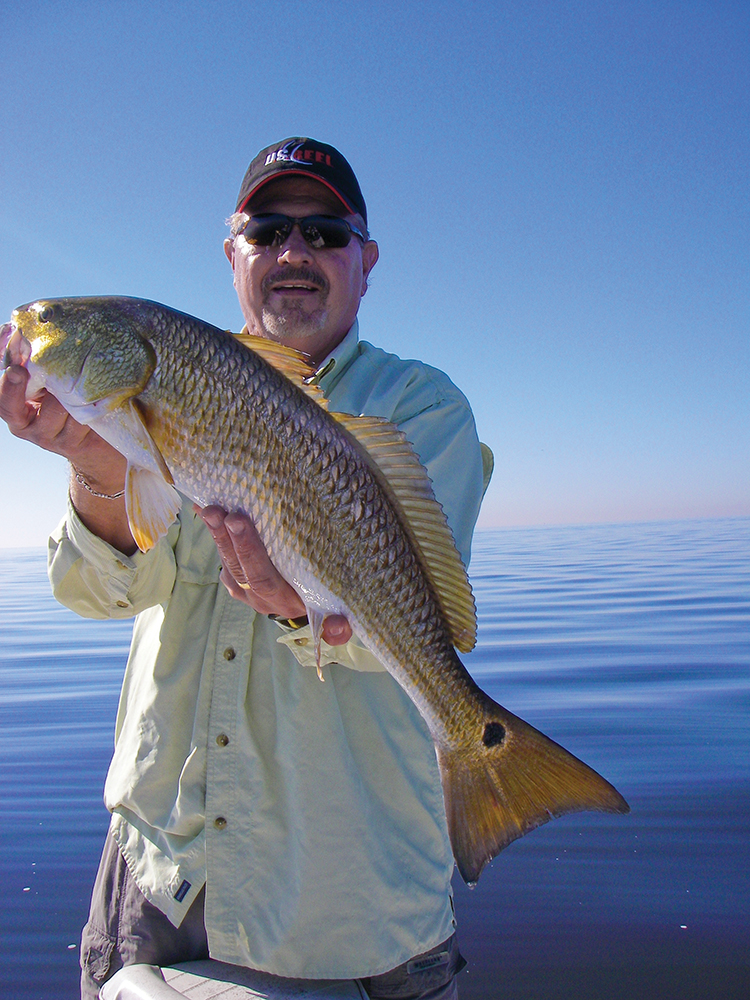 Redfish like this one are taking up the slack.

“If you don’t start launching on the Louisiana side of the lake and fishing south of the Causeway, you may not be guiding much longer.” Those words of wisdom were recently delivered out of concern by a guide that I helped get started several years back. He hung on this past year as a result of having done exactly that.

Ever since the infamous “dredging bite” on the Causeway reefs played out, I have fished only sparingly south of Garrison’s Ridge. In order to compensate for the slower bite the first few months of the year, I either wade the flats on the north end targeting big trout or jig the deeper breaks in the Intracoastal and Sabine River.

For years that stubborn approach resulted in refining an incredible deepwater bite that went uncontested by other fishermen. I now feel, however, like that bewildered Indian that walked out of his tepee one morning and asked, “Where the hell have all of the buffalo gone?”

The good news is that we have not yet killed all of our trout. The bad news is that they are dependent on at least a little salinity and are forced to move southward as ours all but disappears. The looming question is whether this is the new normal, which would be devastating, or nothing more than a temporary blip in the weather cycle.

Over the past few years, each hurricane has been more intense than its predecessor, the reservoirs fight high levels and local flooding only adds to the problem. It is pouring here this morning, raining all the way to Dallas and both Rayburn and Toledo Bend are generating 24/7 in an effort just to maintain pool levels.

Just last week I stopped at two different locations on Sam Rayburn to watch a howling north wind push white caps through the woods several hundred yards from the original shoreline. That is bad news if you are a Sabine Lake trout and have not already started following the last of the salt water southward!

I have fished long enough to know that there is always someone catching fish even if the lake is dry, but I haven’t talked with one of them recently. The few guides that I have talked with are either hunting or catching a few Louisiana legal trout in the ship channel.

They have enjoyed a good run on sheepshead and redfish, but a lot of that has been the result of fishing with meat rather than lures. I am certainly not above offering a fish a dead shrimp if that is the only game in town.

Because I expect it to at least temporarily get even worse before it gets better, I can only tell you that we did to catch a few trout this past week. We waded very dirty water the first few hours after dark with Catch 5s and rattail Assassins and caught seven trout on the best night.

All but one of those trout was in the two to four pound class with possibly the largest pushing five pounds. We haven’t kept a single trout in months so the weight is only a guesstimate in the dark.

When we were still catching trout in the daylight hours we were wading the points bordering East Pass and the south tip of Stewts and Rabbit islands. Those areas were getting most of the fishing pressure early, but it thinned out in the afternoons. Six to eight fishermen is considered pressure when the catching is taking place in one small area!

At the risk of causing the last of the promising bites to vanish as well, I will predict that redfish will continue to carry the mail for us. We are still catching them on everything from frozen shrimp to topwaters and best of all…there are a lot of undersized fish in the mix. Hopefully, by the time you read this the bonus will be flounder running the shorelines with the reds chasing massive schools of immature shad.

I would like to thank Chris Williamson of Laguna Rods for building me a new stick that has made catching every fish a little more enjoyable. The rod listed as a Solo is not only incredibly light but will handle a variety of lures as well.

Don’t leave the youngsters at home the next time you hook up the trailer. Pay backs are invariably unpleasant and they just might leave you at home some day!