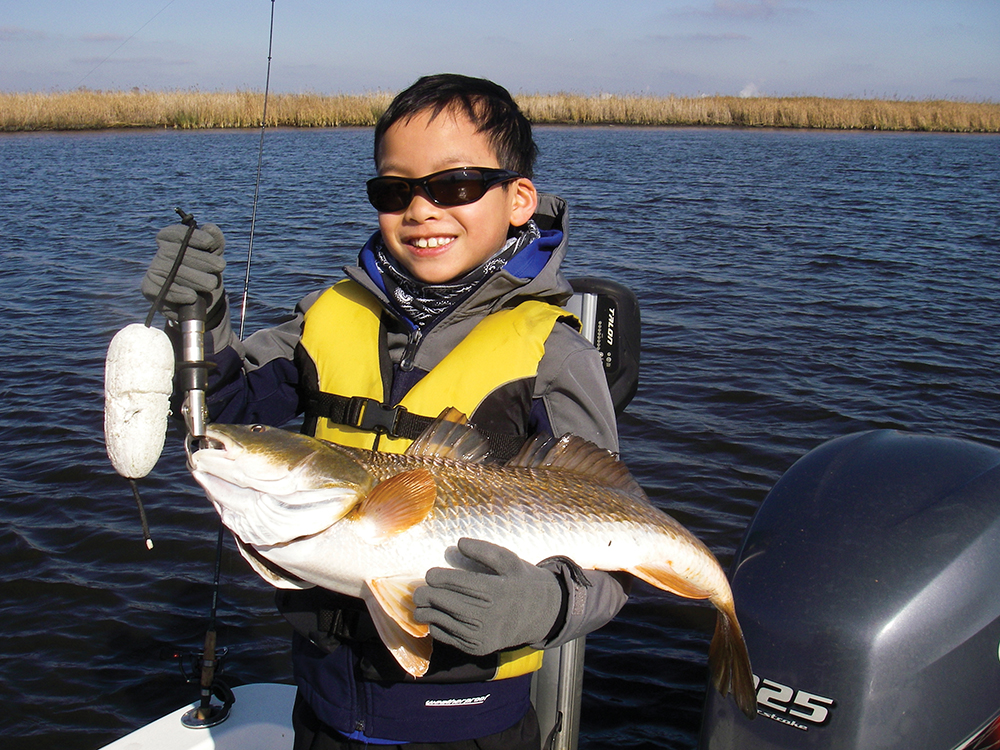 This is an armload of redfish!

After spending most of the prior day in shorts and T-shirts on the final day of March, we awoke the following morning to a 15 mph north wind making 41 degrees feel even colder and a silted up shoreline to start the day. Much to my chagrin, I couldn’t blame the poor bite on any of those less than favorable conditions.

While the trout bite on the south end of the lake has improved, the size has lagged behind. Because the majority of the specks are only Louisiana legal, much of the fishing pressure is taking place along a short stretch of water on the Louisiana shoreline. At the same time, a dozen or fewer boats on a pretty Saturday is still considered a crowd on the north end of the lake.

With the exception of one surprising flurry the final week of March, I am yet to consistently catch keeper trout fishing out of the boat on the north end. That flurry consisted of eight trout up to four pounds caught cranking a Swimming Image along the revetment wall. Wading and a boatload of patience have produced our few solid trout, but only in a handful of spots. That is not the kind of catching that sells bay boats and sacks of soft plastics!

There was an audible gasp heard throughout the local fishing community when word leaked that the five trout limit will soon include Sabine Lake. The initial fear was that the Louisiana launches would have to expand their parking lots to accommodate more meat hunters, but I don’t think that will be the case.

I believe a few more local anglers will cross the Causeway every day, but I seriously doubt that a significant number of anglers will drive from Houston or further just to keep small trout. Unfortunately, I also doubt that the reduced limit will yield the desired result as long as a Louisiana license enables you to play by a more liberal set of rules.

This is not unlike trying to sell you on the idea that we will have more pie if you eat only one piece while limiting the fellow next to you to three pieces. What is good for the goose is good for the gander and the gander hasn’t bought in to the five trout limit thus far!

Measurable salinity level remains a mystery to me as far as how it effects trout movement, but there is no doubt that it relocated most of our larger fish. At the same time, for some reason, it didn’t move all of them and we are still able to squeeze out enough fish in the three pound class to keep us on the hunt.

For the most part, catching fish on the south end involves little more than trespassing anywhere three or more boats are gathered. That is not to say that you can’t find your own school of fish, but should that happen you won’t be alone for long!

The few times that we have fished the south end we did better on an incoming tide and swimming four inch Assassins and Lil Johns in three to six feet of water. The trout ate the Softdine just as well, but hang-ups were more expensive and treble hooks and small trout are a dangerous combination.

I look forward to the day when I can generically report that the trout are doing their thing on the flats and islands on the north end, but for right now few boat fishermen are hunting and successful waders are homesteading the more promising spots. It could be that the bite is possibly a little better than reported, but so many fishermen have given up on the north end that a good catch could remain a secret for a long time.

Because the redfish bite is strong enough to yield limits without hundreds of casts, we knowingly tend to quit on the trout too quickly. If there has been any semblance of a pattern for us it has included wading areas where the tide movement is obvious. We have caught no trout deeper than five feet and four to six inches of clarity is considered acceptable.

Toledo Bend and Rayburn dumped a lot of water on us last month, but we have not had that much rain locally. Hopefully the catching will continue to improve on Sabine with improving conditions.

Kids aren’t concerned with size…they just want a tug on the line!