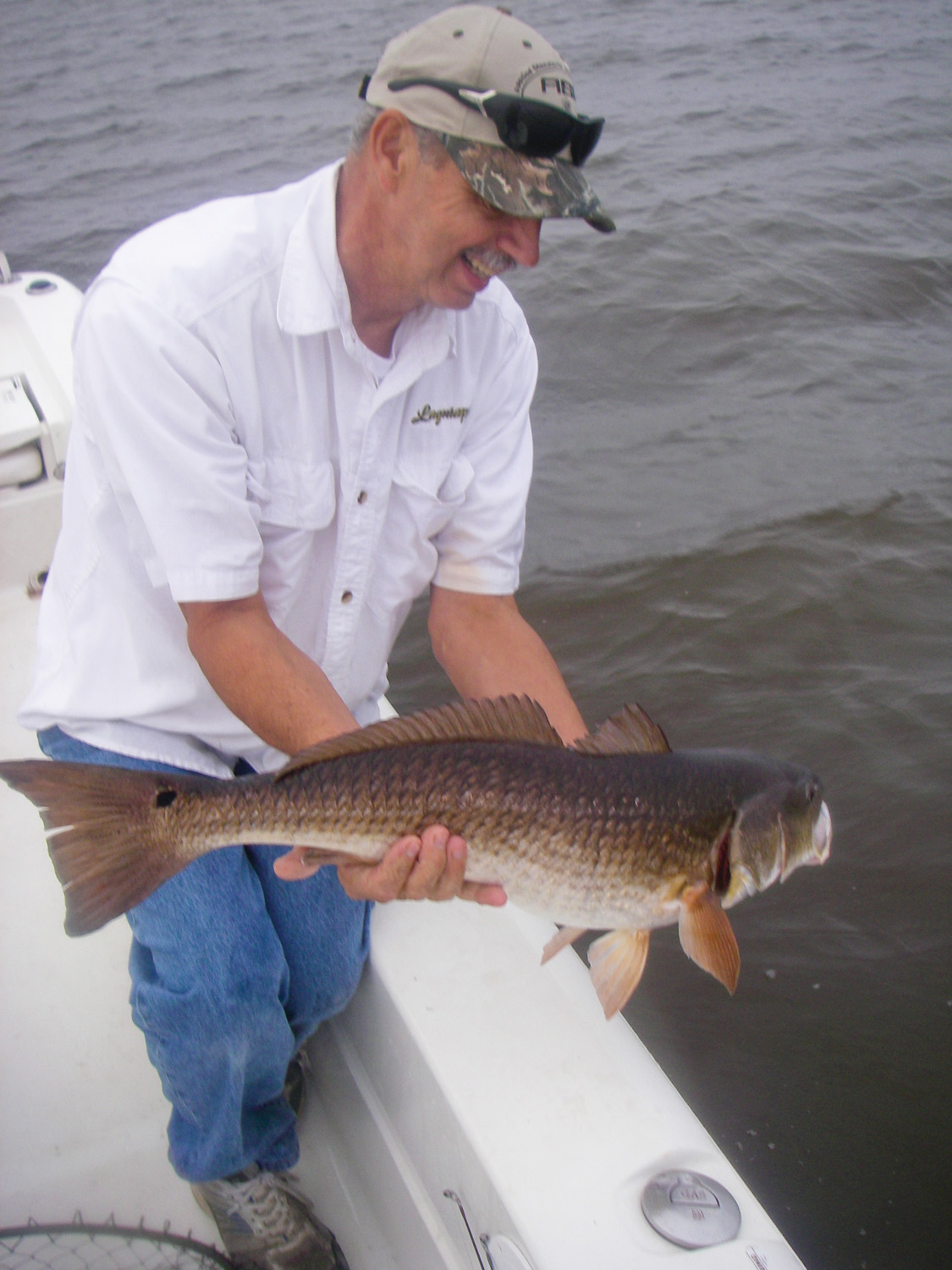 Redfish action is incredible, which means there’s lots of catch and release going on.

Over the past seventy-two years I have weathered my fair share of hurricanes and tropical storms, but none compare to Harvey. We’ve had trees fall through our roof resulting in rain damage, but the rising water always stopped a little short of the front door.

I cannot recall an incoming hurricane that didn’t initially flood the southern portion of Orange and Bridge City, but they miraculously stayed relatively dry while the western and northern portions of the county caught hell. The public boat launch is now covered up with tents, travel trailers are wedged in between piles of debris and many residents will not be back in their homes for at least a year!

After salvaging our computer, the first thing that popped up on the screen was last month’s column which never got mailed. I try to start on it a little early and had I sent it to Everett at that time, you would have thought I had lost my mind. The only sentence that was semi-accurate mentioned that it looked like Rockport might have to weather a pretty tough tropical storm.

The last thing I will say about Harvey is that hurricane force winds are amazing to witness if you are in a safe place, but the sheer volume of rain that fell on us for the better part of a two-hour span was even more unbelievable. There was no space between the raindrops. It was as if someone was standing on the second floor pouring a bucket of water on your head!

Needless to say, I have not done a lot of fishing over the past few weeks, but neither has anyone else. Due to the need for more temporary housing, every motel room is occupied and there is no place for visiting clients to stay. Fish cleaning is a bit of an inconvenience as well with the marina still out of commission, but the good news is that the catching has rebounded.

The water clarity is great and there is still enough salinity near the bottom to keep the reds and flounder hanging around. The trout bite has really taken a hit, but they are still catching some small to medium fish south of the Causeway.

The phenomenal redfish bite comes as no surprise as they almost always go on a tear immediately following any type of flooding. It is so good, in fact, that you can basically catch them any way you choose. The surfacing schools in the open lake will eat anything from a plastic tail to a stick if you can get it front of their face.

When they are as aggressive as they are right now, I don’t recommend fishing with a cork. Not only will a second fish often hit the cork, but it adds to the resistance while fighting the fish. We will hunt fish with the cork, but once we find them we switch to a single hook lure as treble hooks are a “no-no” as well.

If you savor the explosion of a thick shouldered red crashing a topwater, simply swap the stock treble hooks for single hooks. I will be surprised if after fishing them this way that you ever switch them out for the original treble hooks.

The schools of redfish patrolling the shorelines are smaller, but no less aggressive as they push everything from mud minnows to small crabs to the surface. A four-inch Usual Suspect or shallow diving crankbait works especially well when chasing these fish in shallow water. At least for right now, don’t be surprised if your next fish is a bass!

We have been totally eaten up with the flounder bite lately and it is only improving. Both the size and numbers have been impressive. I think the largest fish are coming out of the ship channel, but the best numbers are coming off the shoreline in the main lake.

Live bait or Gulp rigged on a quarter ounce head are probably the best choices of lures, but we catch a lot of our fish with a curly-tail grub rigged on an 1/8-ounce horse head jig. The blade doesn’t produce any vibration but it does yield enough flash to attract the more finicky eaters.

With many of our kids currently living with family friends just to remain in their school districts, fishing has been pushed lower on their wish lists. You can, however, mend that problem with an unexpected invitation to wet a hook!