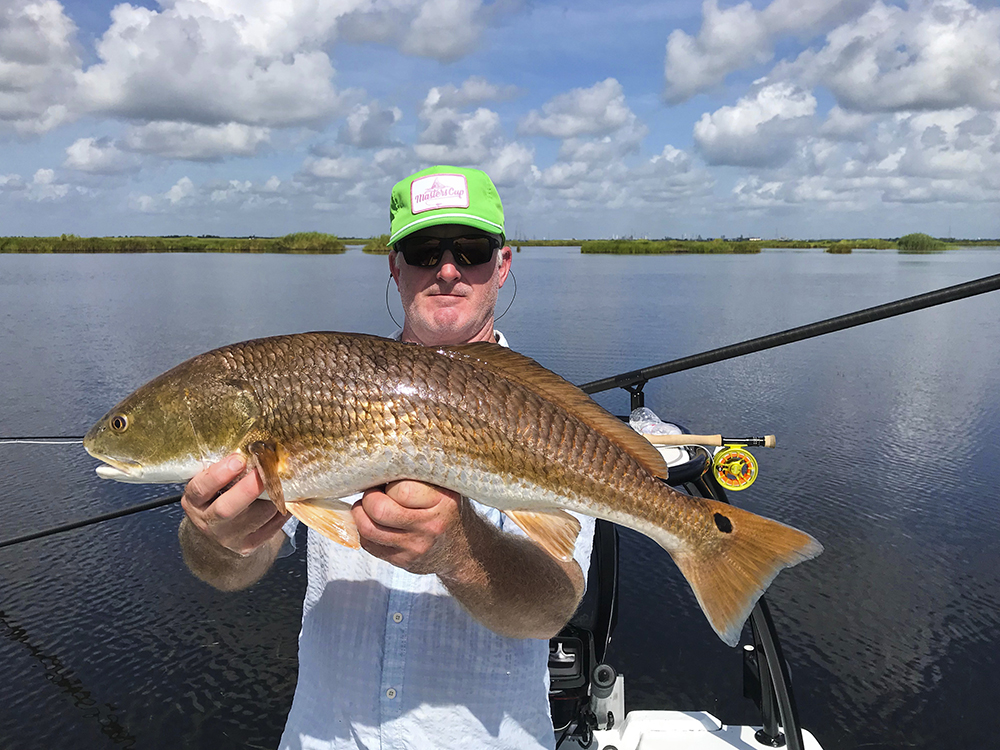 Brad Beauchamp duped this backwater red with a fly rod.

Thank God for redfish and flounder. They continue to carry the load for Sabine Lake anglers as we move into the cooler months of fall, still unable to consistently catch keeper trout.

After a blistering but relatively dry and wind-friendly summer, I readily accepted an invitation to join some old college teammates for three days of fishing in south Louisiana in mid- September. The redfish bite is always as good as you will find anywhere and while their trout are numerous, even if generally on the small side, I was ready to catch more than one trout of any size.

We never wet the first hook. We hit the rain just south of New Iberia and it poured virtually every minute the next two days. We visited and ate way too much for a day and a half before giving up and returning home. That rain followed us and it has continued to rain at least once a day every day since!

The lower coast has apparently not fared much better as our editor, Everett Johnson, recently told me that basically everything around his house was either soggy or underwater. The added cost of building his home on a manmade hill has paid significant dividends over the past few years.

We continue to hope that the stiff north winds that precede each new front will lower the level in the marshes and ignite a consistent trout bite. We have all but given up on our magnum trout that attracted a world of visiting anglers, but we can better assess the overall bite once the fish and bait are a little more confined.

Regardless of how it plays out, one thing is beyond debate. At best, the trout population will take a while to recover and keeping every trout over fifteen inches won’t accelerate the process. Reducing limits would help, but the fact that Texas anglers simply need to launch on the Louisiana side of the lake to keep even smaller and more fish somewhat negates that proposed solution.

Many of the Texas guides that fish Sabine are now launching on the Louisiana side in order to stay in business. I seldom, if ever, fish south of the Causeway so I can report only what is passed along by dependable resources. While most of the trout are only Louisiana-legal (shorter than Texas’ 15-inch minimum length), they are catching decent numbers from Lighthouse Cove to the jetties.

We are occasionally stumbling up on small groups of trout on the north end, but it is invariably a bite that seldom lasts more than a day or two. The rain has slowed that bite of late, but most of the trout we have found on the north end of the lake have been holding in 2 to 4 foot depths within a cast of significantly deeper water.

As it gets colder and water levels drop in the marshes, the deeper drains and bayous will attract more trout staging to ambush baitfish and shrimp moving out of the back lakes. Four-inch tails like the Sea Shad and Lil John rigged on jig heads just heavy enough to keep the bait close to the bottom in moving water are usually the ticket.

Hopefully, we will eventually find trout chasing shrimp under the birds in the open lake. That may well be a pipe dream, but only time will tell. The two-fish limit on flounder renders them more of a bonus right now than the main target in November but they have been fairly easy to find and the average size has been very good.

Redfish, on the other hand, continue to rule the roost. We are finding them in those same drains and bayous, schooling in the open lake and patrolling the shallow ponds bordering the bayous. While fishing those shallow ponds with a frog or weedless spoon is an absolute blast, the topwater explosions are even more rewarding when armed with a fly rod.

Our sand trout are just now starting to stack up in deeper water and that is absolutely a kid-friendly bite. Keep it simple by vertically fishing the school. It can absolutely produce a bite or fish every time the bait reaches the bottom. Plan on keeping just enough to clean and eat that evening and you will enjoy both the texture and taste. Give it a try this weekend.

Playing a role in a youngster catching a fish will always be the best part of fishing!