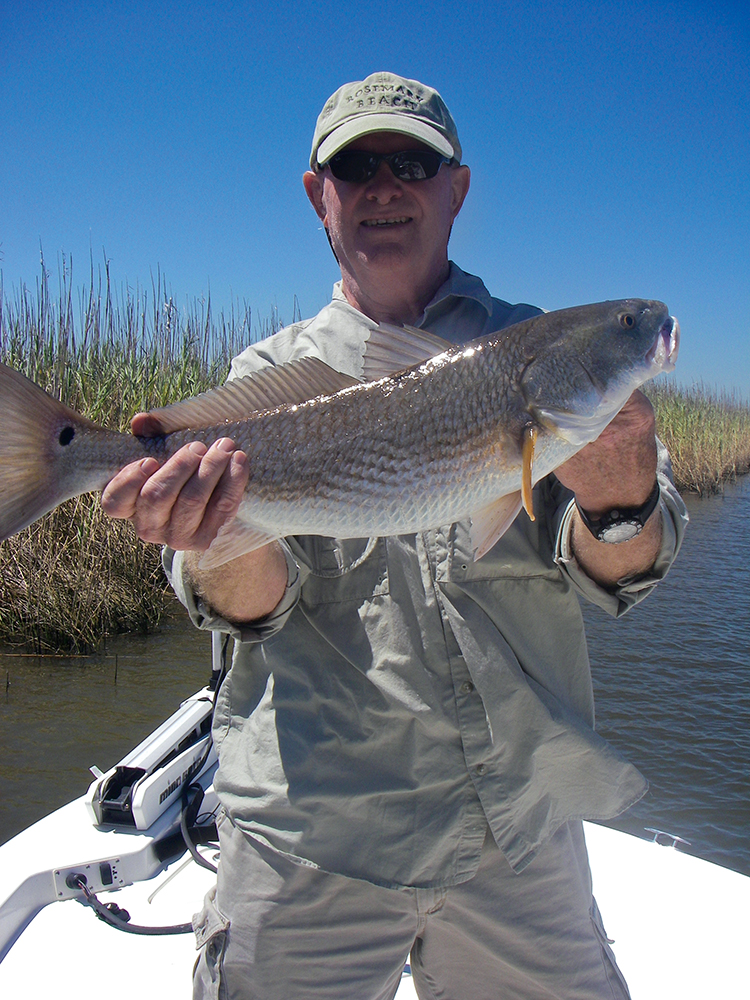 Redfish and shorelines are a good ticket for the fall season on Sabine Lake.

Not unlike everyone else residing between Winnie and Orange that took a hit for the second time in two years, I watched the water slowly rise in my daughter’s yard under a light, but persistent rain and thought aloud, “This cannot be happening again.”

Twenty four inches over the next four to six hours, however, sealed the deal and the unexpected deluge left lots of folks with only enough time to grab pets and wade to higher ground. While it failed to match Harvey levels, forty-three inches is still a significant amount of water. Aside from any other cumulative precipitation over the past two years, the two storms alone combined to dump a total of 103.61-inches on this area!

From a fishing standpoint, we were finally seeing modest, but positive signs that the smaller trout were at least trying to return to the lake. So much for that. Before the first soggy chunk of sheet rock was pulled off the wall, my grandson and his cousin waded out of his inundated home with a fishbowl containing a single fish. “This might be the only fish between here and the Gulf that knows what is going on,” he offered without the slightest hint of a smile.

Because of the tight path the storm took when it finally decided to move, far fewer homes were lost this time, but that glut of fresh water still had to pass through Sabine Lake. Fortunately, the SRA was working on the dam at Toledo Bend and the Sabine River was exceptionally low.

One more hit like this in the next year or two and it may be time to replace the Causeway with either a dam or a weir. There was no tidal surge with this storm and every drop of unwanted water is fresh, thus the lake cleared up seemingly overnight which has at the very least helped with angler confidence.

I have spent far more time lately with a nail gun in hand than a rod, but we have still been able to catch a few reds in most of the same old haunts when we find time to chase them. It has been a matter of pounding shorelines and the mouths of bayous which is a little discouraging only because we were easily finding schools of slot fish herding shad in the open lake prior to the flood.

When you can see fish prior to making your cast, virtually anything in the box will work, but we are currently not seeing most of the reds we are catching. The best choices for blind-casting and hunting fish have been Gulp or a four-inch Sea Shad under a cork, a four-inch Usual Suspect Swim Bait, or a small topwater. I have no doubt that a gold weedless spoon will work as well, but we just haven’t thrown it much.

We were also catching and releasing huge numbers of undersized flounder prior to the storm, but that bite has just dried up. They were starting to stack up on the shorelines and the rocks on the revetment wall and I am hoping that they simply made a temporary move to deeper water.

We were catching some of our larger flounder in the ship channel south of the Causeway before Imelda did her thing, but I haven’t had time to get back down there. If that bite is still going on, the bite in the main lake could quickly improve following a cold front or two as they don’t have far to travel.

There is no doubt that the south end of the lake will be far more user-friendly than the north end as we move into the cooler months of fall. Aside from the fact that fish obviously need to be present, the key to a quicker recovery depends on the amount of bait holding up in the marshes. Thus far, we have seen very few shrimp, but that does not mean they aren’t there. Finger mullet and small crabs are currently at the top of the menu for both the reds and the flounder.

I have always been committed to getting youngsters on the water with a rod in their hands, convinced that even the smallest successes nurture their passion for the sport. The past two years, however, have been a challenge. The silver lining may well prove to be that these youngsters will feel obligated to protect the resource and never take catching for granted!