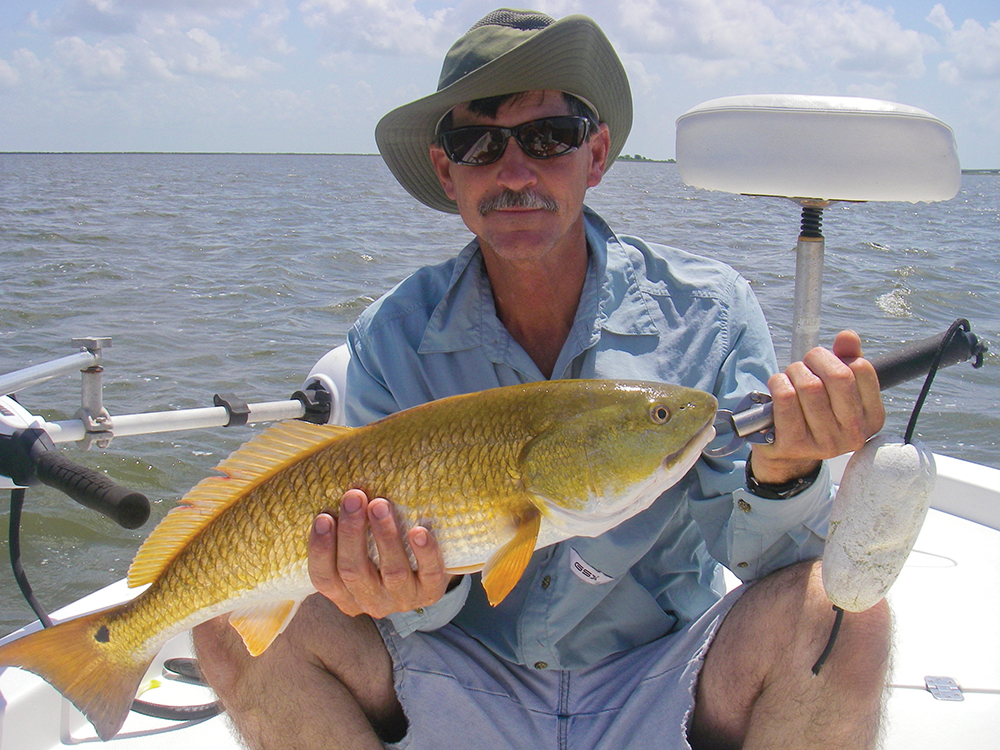 Schooling reds will get a lot of attention this month.
We hadn’t even gotten our bids on the needed repairs, compliments of Laura, when yet another storm headed our way. While parts of Houston and surrounding areas eventually caught hell, we miraculously dodged that bullet and returned to fixing things up and going fishing again!

We have been dealing with high water since early summer and for that reason alone, a tremendous amount of baitfish, shrimp and crabs have had no reason to exit the marshes on the east side of the lake. The good news for Sabine Lake fishermen is that the runoff from Laura’s rains was minimal and both the water clarity and salinity are in very good condition.

Water clarity invariably affects the fishermen more than the fish, but hanging on to salinity is critical. Harvey proved that and it took the better part of two years to even start recovering. The bragging size trout bite is still all but non-existent, but our numbers continue to improve.

We have already had three modest fronts roll through and even the lightest of north winds has a positive effect. The bait has not exited in mass like it will when the water is sucked down to mud and grass, but there has been enough movement to interest the predators.

Just prior to Laura, gulls were starting to work over mixed schools of ladyfish, trout and reds all the way up to the mouths of both the Sabine and Neches and that program rebounded quickly. Because the trout that merit patiently wading small areas are so difficult to locate, the general fishing population has turned to burning gas and exploiting the bird program.

Even when fishing under a cork, downsizing your plastics will fool far more fish. Surfacing reds couldn’t care less if your choice of plastics is a foot long if it lands in the middle of the frenzy, but the trout prefer that you match the hatch making a four-inch tail like an Assassin Sea Shad or MirrOlure’s Lil John a better choice.

If you have the constitution to hold your water and watch smaller trout bang away at a topwater there is a very good chance that you will eventually fool one of the larger trout in the school. It is not unusual to catch a three pound trout with a small ladyfish or smaller trout hanging out of her mouth.

When small ladyfish are on the menu, we absolutely have a blast feeding the trout an Assassin Die Dapper, Texas rigged on a 4/0 worm hook. It is easy to keep on top, sinks very slowly, and is still heavy enough to chunk a long way.

It is also no secret that the larger more opportunistic trout do not waste energy chasing the small shad or shrimp. They simply cruise beneath these surface free-for-alls waiting for the unnoticed casualties to drift down to them.

Your numbers will seldom be as good when targeting these fish, but a higher percentage of your strikes will result in keeper trout. I have found no better way to fool them than to slowly bounce a tail across the bottom rather than swimming it though the upper portion of the water column.

I have a good friend that is consistently successful dragging a Carolina rig through these deeper trout. There is no doubt that it works well, but I am not into having three or four overly excited fishermen in a 22-foot boat trying to launch three quarter ounce sinkers and four foot leaders at the same time. It is, however, another option when you are alone!

Easily one of the biggest detriments to successful wading is inconsiderate boat traffic. The same thing can be said for anglers that are privy to one of the most productive approaches of the fall season.

When the bait exits the marsh via a bayou or one of the major passes into the main lake on even a modest outgoing tide, it is “game on” for the angler patient enough to bury his Talon or anchor and target the nearest break. In spite of unwanted traffic, a depth change no deeper than two feet will often hold a mind-boggling number of fish waiting on the mobile buffet.

Once again, bouncing a jig along the bottom is the ticket and while there may be occasional lulls in the bite, it quickly resumes when the next herd of baitfish parades by.

Don’t leave the kids at home this weekend. This bite will keep them entertained!