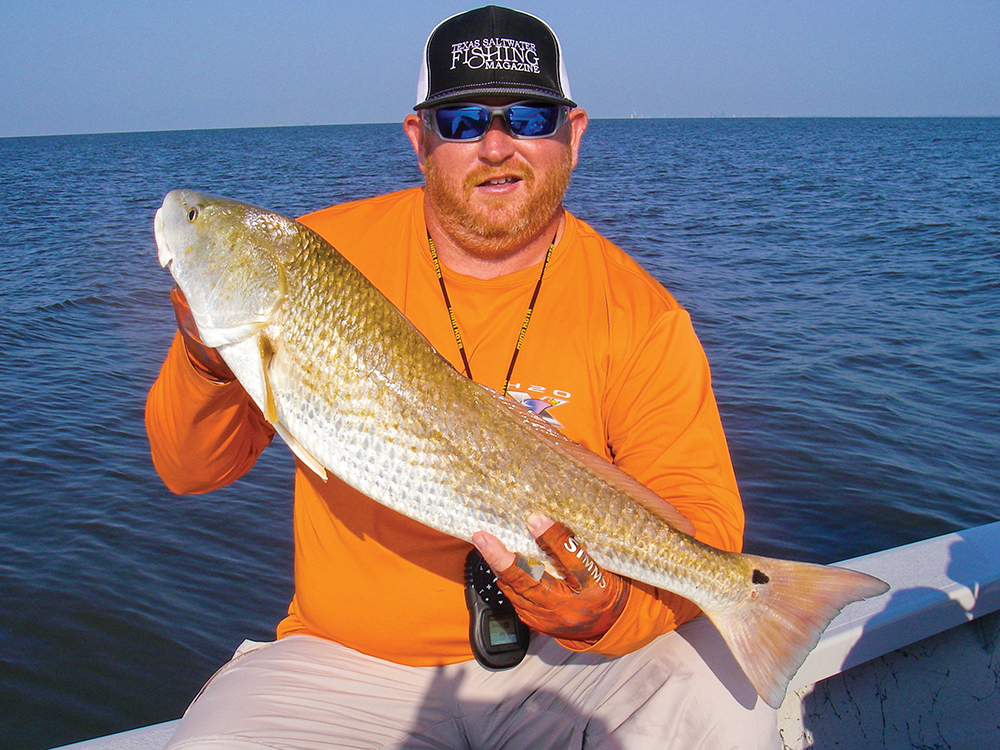 Redfish are absolutely stealing the show.

“What a difference a year makes,” I thought to myself as we stood in a light rain watching the high school football team make its way onto the field for the first game of the year. That exact date one year ago we were picking folks up with a fourteen foot aluminum boat that were standing waist-deep in rising water that was belligerently washing away a lifetime of memories.

While most of us have either rebuilt, remodeled or sold “as is” and moved to higher ground, that devastating night is little more than a bad memory. It obviously is not completely forgotten, however, as a recent two-day rain rekindled those fears and once again had folks on edge!

While it was of little or no consequence at the time, we have since discovered that Harvey did a number on the Sabine Lake trout population as well. Coming on the heels of two prior major flooding events, it simply proved to be too damn much freshwater.

That precious layer of salt water hugging the bottom in the rivers and Intracoastal Waterway was washed away and it was “run south or die” for the trout. Due to an unseasonably dry summer, the salinity level has now risen significantly, but the trout have been slow to return.

The catching has also been affected by the additional mud ushered in by the flooding. Many of the small patches of shell that I marked for years are now buried in as much as a foot of mud and even a modest wind muddies up the lake for a couple of days.

There are signs, however, that at least some of the trout are making their way back. Both shrimp and shad are starting to exit the surrounding marshes and we are now running into isolated schools of small trout on a more frequent basis.

The closest beaches have also produced better than average catches when the Gulf flattens out and the folks that frequent the short rigs are also seeing more trout each trip. Neither venue is a long swim away for a trout looking for an unlimited buffet in Sabine Lake.

In the meantime, it has been “redfish to the rescue” for persistent anglers unwilling to park their center consoles and wait it out. Fortunately, those thick-shouldered bullies were unaware that Harvey ever made land fall and couldn’t care less. That bite has simply been off the charts.

A great deal of it has to do with the fact that more anglers are now targeting them, but they are seemingly everywhere. It also helps that there is a three fish slot limit and “catch and release” has been in effect for a long time. Lots of local anglers just will not eat a redfish anyway, but I am not one of them!

When a redfish is looking for its next meal, whether it be in a foot or twenty feet of water, there are very few lures they will not attack. I love to watch them zero in on a plastic frog waddled across the surface or blow a She Dog out of the water in the shadows of a stand of Roseau cane, but they will just as readily crush a crankbait or Usual Suspect Swimbait.

Having said that, regardless of the area I am fishing, if the depth is between two and six feet, I am usually throwing a plastic tail on a two foot leader under an oval popping cork. A Gulp tail probably works even better, but the inconvenience of having to keep it “freshened” makes it a second choice for me.

Wind strength, within reason, as well as direction, is not a factor when fishing a spinning rig. I combine a seven-foot medium action Laguna rod with a Shimano Stradic reel and load it up with 20-pound Power Pro braid. My leader is 20-pound mono and I am usually fishing either a four-inch Sea Shad or a four-inch Lil’ John on an eighth-ounce head.

Backlashes are never a problem and they will hit the tail just as well when you are popping the cork or ignoring it. I also add a little Pro-Cure menhaden scent for added confidence. It looks as though the cooler winter may have helped our flounder bite as well. We should know more by next month.

There is no valid excuse for not sharing your boat and fishing knowledge with a youngster!