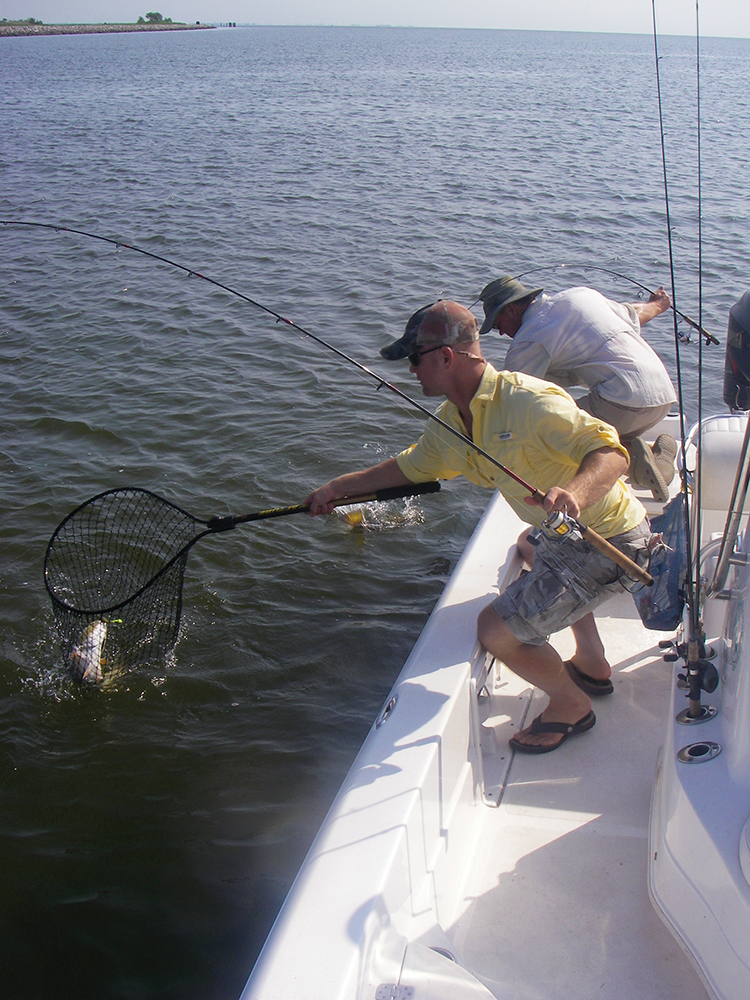 The Louisiana game warden completed a quick and cordial license check and felt compelled to offer his assessment as to why the trout fishing has taken such a hit on Sabine. Unfortunately, it was not a revelation that would answer many questions for frustrated trout fishermen.

“I think that Harvey compromised the salinity level and the trout that left the lake will not return until it improves,” he opined. “As far as big trout go,” he added, “Things aren’t a helluva lot better on Calcasieu.” That is the equivalent of speculating that your ground game may be compromised with your star running back out for the season!

“Compromised” is not the best description of Harvey’s impact on the entire Sabine ecosystem. To compromise is to give a little on both sides and Harvey was unyielding.

While I would recommend hiring a guide somewhere west of Galveston if I were looking for a trophy trout, there are finally legitimate signs that we may once again catch Texas legal trout on Sabine. Including the Galveston bays is a little unfair as they are in far better shape than Sabine, but they took a significant hit as well and their big trout are still scarce according to resident anglers.

If you still want to give Sabine a try, stay south of the Causeway. I feel certain the herd of local anglers fishing that stretch of water for Louisiana legal trout will not welcome added pressure, but it is basically the only game in town. Launching on the Louisiana side is your best bet if your end goal might be to host a fish fry.

What I consider to be the most encouraging sign of late, however, is that the SRA stopped discharging to work on the dam and our water clarity and salinity have improved significantly. As you would suspect, every seasonal pattern is still way behind schedule, but we are now finding ladyfish and gafftops hounding massive schools of immature shad all over the lake.

That is admittedly lowering the standard for what Sabine Lake fishing was even three years ago, but few now anticipate the bite rebounding overnight. It has to improve one step at a time and this is an important first step!

Even as the smaller trout appear to be moving northward, I have talked with nobody willing to offer a guess as to where all of our big trout went. They obviously didn’t die, but they certainly moved or changed their lifestyle.

A client that has fished both the Galveston complex and Sabine recently told me that he has caught one trout over six pounds in Galveston and none in Sabine in the past two years. He caught a combined thirty-nine trout over the six-pound mark the year prior to Harvey’s arrival, including a 9.6-pound personal best wading Sabine.

While the trout have yet to take advantage of the shad buffet, the redfish are starting to hound them during the hottest hours of the day. Because the shad are so small, however, the surface activity is not as explosive and the schools are moving much faster.

The one thing that remains consistent regardless of the size of the shad, is that basically any lure you can reach the fish with will get eaten. The most enjoyable strike takes place when you lob a She Dog or Skitter Walk rigged with single hooks in their midst. You will be even happier upon landing your red or an unwanted gafftop if you switched to single hooks.

When the fish go down, we have had good luck locating them again with a cork and Lil John or a Carolina rigged 5- inch Assassin. Unless you are drifting some serious shell, there is no need to Texas rig the Assassin. Glow-chartreuse has worked really well with the Lil John while bone diamond and red shad have been our go-to colors with the Sea Shad.

The folks that see no reason to fish anything other than live or fresh dead bait have also done well of late on a mixed bag of flounder, redfish, black drum and croaker. Most of the live bait fishermen I talk with are using finger mullet. There is no doubt that the best bite is taking place in the passes and mouths of the bayous on a good tide change.

Despite the inconvenience, the less you handle these undersized trout, the better their chance of survival. It’s a good investment in the future of fishing for your youngsters!