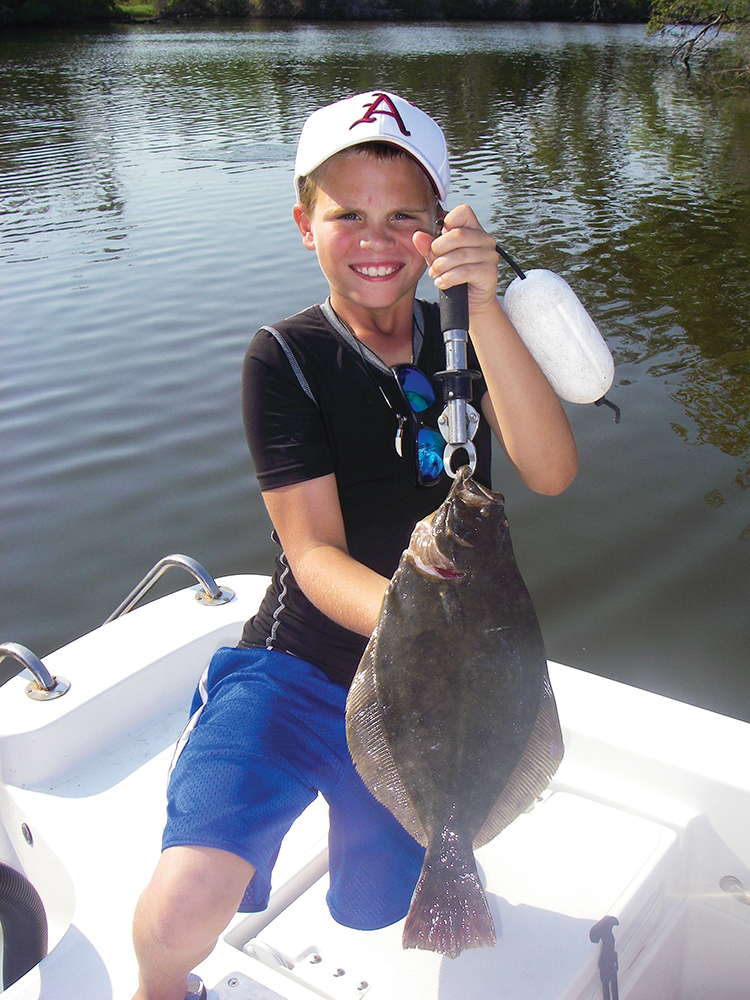 Kids and flounder go together!

It took far too long for a five fish trout limit to go into effect all over the state, especially considering the positive results now enjoyed by lower coast anglers. The only area that probably will not see an immediate positive impact is Sabine Lake and that is only because everyone must play by the same rules for any change to work.

The bite continues to be incredibly tough and few anglers targeting trout even bother to launch on the Texas side of the lake. Better numbers of undersized trout are starting to show up from the Causeway to the jetties, but that improvement is of little value when most of them leave the lake via a Louisiana launch!

Thus far, the more restrictive limit has stifled my catching about as much as increasing the speed limit to 70 mph affected my driving when I was a young man. I had a 1952 Chevy that wouldn’t run over 60 anyway so they could have made the limit 100 mph and it wouldn’t have shortened any trips for me.

The jetties are occasionally serving up a few solid trout, but there is little need to get uptight over a five fish limit when you can’t consistently catch five 15-inch fish. Following three days of incredible weather in late July, I joined a pair of the best local trout fishermen I know for two days of fishing in the lake only.

We bet a shrimp basket for the first limit and one for the largest trout over four pounds. We fished all over the lake and no one lost a shrimp basket. Brian caught and released three Texas legal fish the first day and Rick released a 3.61-pound trout the second afternoon.

Overall, the lake is as clear in pockets as it has been in a long time. We are also starting to catch a few small lady fish in the bayous, but most of the trout have not even been Louisiana legal.

Easily, the most encouraging bite has been provided by very solid flounder that are taking advantage of small schools of immature shad. The shad are just now showing up, but the flounder may well have been there all summer long waiting on the annual buffet.

Out of desperation, we went old school initially and started covering miles of shoreline with tube jigs and four-inch Sea Shads rigged on 1/8 ounce horsehead jigs tipped with shrimp. The majority of the flounder aren’t even keepers, but when we stick a good one it is a really nice fish.

After a few trips, we were able to target smaller areas and the average size improved. The biggest surprise has been that the fish are biting the jigs much better than Gulp and that seldom happens. The best two lure colors have been black-chartreuse and pumpkin-chartreuse.

I find a spinning rod to be a better choice for short pitches into the wind. I am using a 7-foot medium Laguna rod with a Stradic 2500 reel.  The reel is spooled with 15-pound test braid and three feet of 12-pound mono leader. The small plastics work much better when tied on loop knots.

Don’t worry about being under-gunned with this set-up when a slot red decides to crash the party and the unexpected ambushes have been occurring with pleasing frequency. They almost always bolt for deeper water rather than burrowing in the grass and that makes for a longer, but more enjoyable tug of war.

The marshes have been our saving grace all summer, but most of the back lakes are grassing up very badly in a hurry. This eliminates the hi- performance bass boats probing the same backwater for bass, but it is also getting tougher to navigate even in flat bottom aluminum rigs.

Hopefully the shad will stay in the open lake as they continue to mature and we will find schools of redfish blowing holes in the surface this month. There was a time when trout did the same thing, but I am afraid it would be asking too much to see this happening anytime soon!

I can’t remember the last bass I ate, but due to the buy-in of catch and release angling, bass fishing has never been as good as it is today.  Catching, not keeping, is still exciting and a key ingredient for improving game fish numbers.