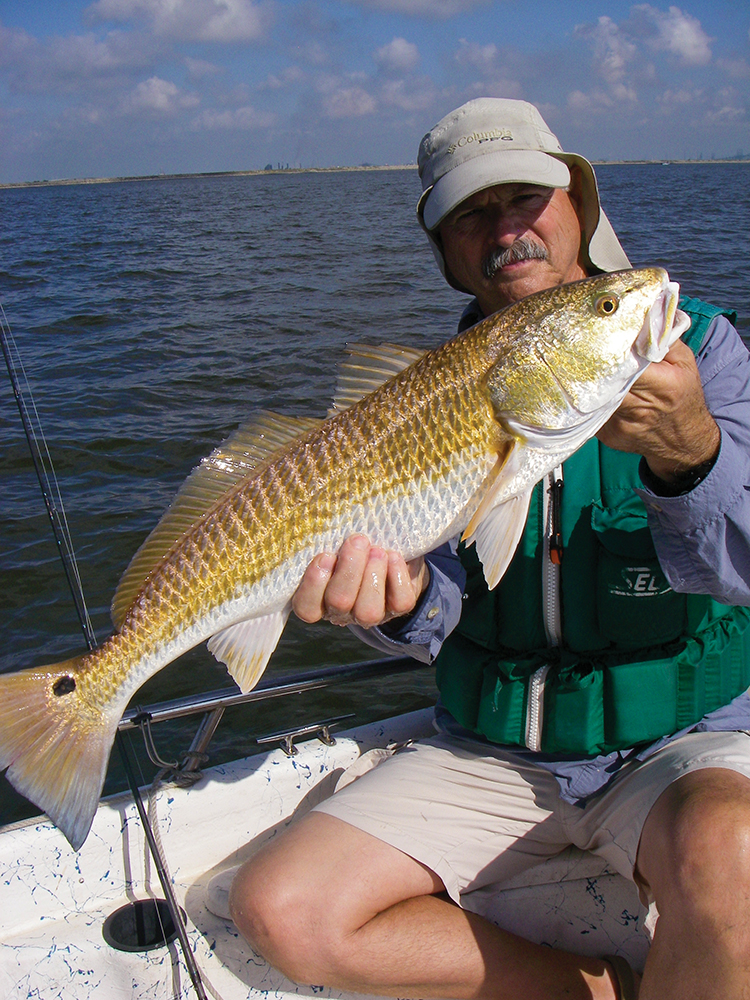 September is a great month for schooling reds!

I was recently asked by a young fisherman aspiring to embark on a guiding career, “Why have you chosen to stay north of the Causeway all of these years…..especially now?”

My short answer was, “I just never felt comfortable fishing below the Causeway.” I quickly added that I have lived here all of my life, but I spent the first fifteen years of my guiding career on Toledo Bend. Had it not been for another angler sharing his techniques for exploiting a fantastic flounder bite with ultra-lite tackle, I doubt that I would have ever pulled the first party on Sabine.

I think it was the fact that his program was so similar to bass fishing that I was easily converted. The fact that it was right here in my backyard didn’t hurt either. Trout fishing was not even a consideration at the time as most of us were convinced they were all small and wormy.

It wasn’t until word leaked out about really big trout eating plastic worms drifted over the deep reefs that I even entertained the prospect of fishing the south end of the lake. The very real possibility of catching an eight or nine pound trout on the same worms I had been fishing on Toledo Bend was too enticing to ignore.

When Mickey Eastman and his visiting Troutmasters proved that we were covered up with big trout all the way to the mouth of the Sabine River, I immediately switched gears. The big fish had been there all along and we simply did not have a clue as to how to fool them.

That longwinded explanation should serve as reason enough to never seriously consider my report as an accurate account of how good or bad the bite is south of the Causeway. I fish the jetties on occasion with friends, but it is their show from the time we launch the boat.

I can, however, report the following with complete confidence. They are still not catching the huge trout we once took for granted, but they are catching more than enough keeper trout to indicate the future could be bright. I say that on the heels of eight straight frog-strangling days of rain and if there is anything that will slow down or even kill a good bite, it is a glut of fresh water.

Hurricanes aside, I believe that we will finally see a more consistent trout and redfish bite in the main lake this month. More shad are showing up and I recently caught my first ladyfish of the summer. That’s a good sign for the lake fishermen!

I anticipate better numbers of trout herding those shad and hopefully the size will continue to improve. Since catching will probably be a numbers game at best, we will target them with four-inch Sea Shads and Lil Johns rigged on quarter ounce heads fished both under a cork and blind casting.

On the calmer days, I also expect schools of redfish to start crushing these same shad on the surface. They will do it when it is white capping as well, but they are not as easy to hear or spot. They will usually eat anything you can get in front of them, but we keep a Hoginar tied on at least one rod all the time.

For years, and this month should be no different, the schooling reds on the north end track these mobile buffets daily on a line from the north revetment wall to Garrisons Ridge. That action is as likely to start in the middle of the day as it is early or late.

There is no doubt that our once incredible flounder bite has also taken a hit, but it shows signs of rebounding as well. There was a time when they were so plentiful that I used them to teach inexperienced anglers how to detect a strike. They are obviously no longer that plentiful, but I have not had a problem limiting on most trips. The bite has been more user-friendly and most of my fish have been in the sixteen to eighteen inch class.

The bait of choice has been a pumpkin-chartreuse Sea Shad rigged on 1/8-ounce Road Runner heads. I am adding a menhaden scent and outgoing tides have worked best. Marsh drains and late afternoon have been the most productive combination, when the tide is right.

Stay well and share your love of fishing with the kids!