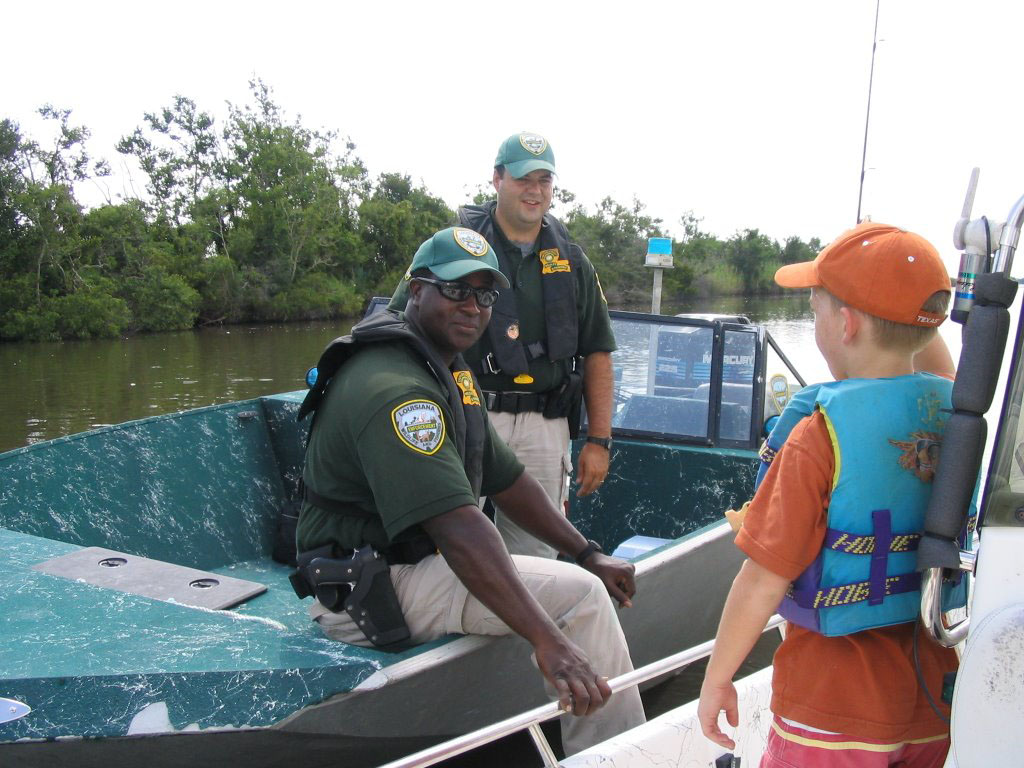 Louisiana game wardens took a minute to visit with this young angler while patrolling a bayou on Louisiana side of the lake.
It has been a long time since I struggled as badly as I did this past month on Sabine Lake. There was a decent redfish bite on most days and we caught a few flounder between rains, but most of our trout were the product of trips to Calcasieu.

Easily, the biggest obstacle was water clarity or the lack thereof. The combination of runoff from several big rains and daily winds that blew from every direction reduced the visibility factor in much of the lake to six inches or less. I know that trout have to eat even in ugly water, but it sure doesn't do much for angler confidence.

If that was not enough, the LNG pipeline work began on schedule adding to the difficulty factor. If you are not familiar with that project, it includes burying sixteen miles of forty-eight inch pipe in the main lake. The pipe actually enters the lake north of Garrison's Ridge and exits at Shell Island just north of East Pass.

You cannot dig an eight-foot deep trench the length of the lake without muddying things up a little, but the non-stop crew boat and barge activity from Adam's Bayou to East Pass has made that stretch of water even tougher to fish. The pipeline is well marked with designated crossing points that enable you to cross the site without danger of hitting dredge material. That material will remain there until the pipe is buried and the bottom returned to within six inches of its original depth.

We knew going in that the pipeline work was something we were going to have to fish our way through this year, but it was a little demeaning being told that we would hardly notice their presence. It was not unlike having the farmer tell you that his plowing the pasture while you sit in your blind will not bother the deer!

If we do not get a great deal of rain this month, much of the lake will clear up and we should see some of our best trout fishing of the year. We will start experiencing some of the biggest tides of the spring and good concentrations of trout, reds, and flounder will set up shop around the major drains exiting the Louisiana marsh.

Because we will be speeding up our retrieves as water temperatures continue to climb, the Catch V and Catch 2000 will replace the Corky on most days for me. Bone-silver, chrome-green back, and chartreuse-pearl sides are very productive colors this time of the year. Top water lures like the She Dog, Skitterwalk, and Super Spook will produce their fair share of big trout as well. It is not unusual for us to locate the fish with topwaters in April only to switch over to suspended lures or tails to catch better numbers. Our redfish will also crash the party when you least expect them and will readily eat any of those lure choices.

On the windier days of April and May, we also do very well on both trout and reds drifting the flats with Assassins rigged on a one-eighth ounce head under a Paradise Popper. Look for the better concentrations of trout to spend most of the day in three to five feet of water. Adding a little Bang garlic scent to our plastics invariably produces more bites.

Another viable option for avoiding the wind is to duck into one of the bayous leading into the Game Reserve. The flounder fishermen will already be there, but we catch a lot of trout and reds in the tea-colored backwater as well. As a rule, the outside bends are prime areas on a good tide change. We do much better downsizing to smaller plastics like the Sea Shad in pumpkin, glow-chartreuse, and Texas roach.

We also do well with single spin spinnerbaits and swim baits like the Crme Spoiler Shad. We really caught a lot of nice flounder this time last year on the spinner bait rigged with an electric chicken Blurp Sea Shad.

In order to fish inside the reserve or in any bayou on the Louisiana side of the lake, you have to have a non-resident Louisiana license. If you launched on the Texas side of the lake you can only return with Texas legal fish. If you will do those two things, you can fish anywhere you choose and not have to worry about Game Warden encounters. If they have to explain the rules to you on the water, however, it usually gets expensive!

The wild card this month could very well be the jetties, the Causeway reefs, or both. Weather permitting; the jetties are always an option for everything from trout to giant black drum. Should the Causeway reefs get hot, they will draw a crowd, but they can yield an incredible number of solid trout day after day. Drifting the deep shell with tails and managing the speed of your drift are the keys to cashing in on this bite.

We carry a wide variety of different colors out of self-defense, but limetreuse, LSU, red shad, morning glory, and pumpkin-chartreuse are proven winners. A quality drift sock and lots of jig heads in an array of sizes are also must have items. The beginning of either tide is the time to be there, but incoming tides are usually the best as they usher in not only bait, but the clearest water as well.

Please remember while they tend to make you nauseous, soaring gas prices are still no excuse for more freezer burned fillets at the end of the day!