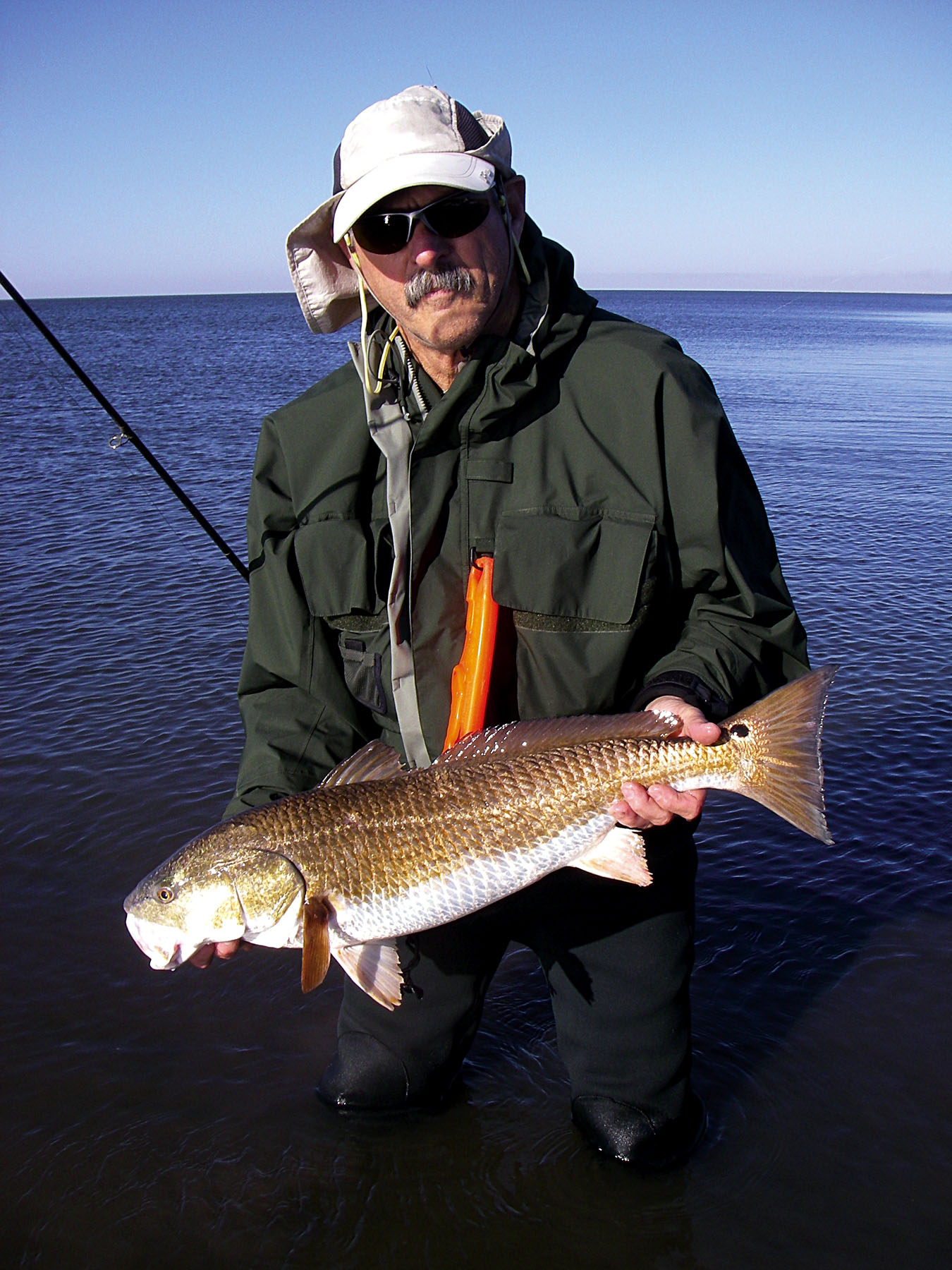 Cold weather hasn't slowed the redfish bite on Sabine.
After fishing in a light snow flurry the last week of February, but snow nonetheless, I am very reluctant to make any predictions for April. Mother Nature has just refused to pack winter up and leave town in a timely fashion and every pattern has been pushed back at least a month.

Because March fishing was more akin to what we were used to in February, I can only assume that April patterns will be a little late to develop as well. The key player, regardless of surface temperatures, will be how much wind we have to deal with this spring. Last year was certainly no bargain.

The Louisiana shoreline has seen fishing pressure like never before as it afforded the only protected water under warmer southeast winds much of the winter. The good news lies in the fact that the majority of the lake went untouched through the middle of last month. Depending on wind direction and velocity, the bite on the flats on the north end of the lake should soon merit the most attention.

There may well be some modest gull activity for those looking for an easier bite, but we will wade or drift the flats early and late for quality trout. The topwater bite should be much improved and I favor the She Dog or Top Dog, Jr. in pearl-chartreuse or bone patterns. The larger Super Spook is also a good choice, especially on those windier days.

This is no time to abandon suspending lures like the Corky, Catch V, and Catch 2000. Do not let the lack of water clarity work on your confidence level. Pink is a consistently good color for us in both clear and dirty water. If you have a foot or more of visibility add dayglow and electric chicken to your arsenal. In dirtier water red shad and black-chartreuse are good additions.

The middle portion of our fishing day, wind permitting, will be spent drifting 3 to 5 feet of water with the same lures. Swim baits like Crme's Spoiler Shad and longer plastics like the 5-inch Assassin Shad rigged on a 1/8th ounce head are also winners in the deeper water.

When making these deeper drifts I rely on a drift sock to get in more casts per drift. I also keep my Stake Out Stick at hand for a quick stop following a hook-up or even a missed strike. Too many times folks drift right over a school of fish or a prime piece of submerged structure without ever stopping to check it out.

The Louisiana shoreline will still hold good concentrations of trout along with flounder and redfish. We are absolutely covered up with redfish on Sabine and this month will be no exception. While the drains and mouths of the bayous will draw the largest crowds, every inch of shoreline holds at least a few flounder and redfish most days.

Even the smallest point of land and isolated stands of cane are prime places to target. Gulp, 4-inch Assassin Sea Shads, MirrOlure soft shads, and 1/4 ounce spinner baits all work well on both reds and flounder. The fish hold right up in the roots on high tides and tend to bunch up 10 to 15 feet off the shoreline on an outgoing or low tide.

Plan B when the lake is blown out are the bayous on the east side of the lake or drifting the deep reefs north of the Causeway. Either of those choices are Plan A for a lot of local anglers on even the calmer days. The Game Reserve is now open again granting you access to Willow and Three Bayous in addition to Black's, Johnson's and Madam Johnsons.

I won't waste your time with the oft repeated nuances of dragging plastics over the deep shell on tide changes, but I will remind you to not overlook the possibility of a great topwater bite in the pocket on the south end of the Causeway reefs. Once again, do not pass up this bite due to water clarity if bait is present.

I do not fish areas like Keith Lake and Bessie Heights enough to give you a firsthand report, but both can get exceptionally hot this month. Likewise, I will probably not fish the ship channel south of the Causeway or the jetties until May, but that is strictly by choice. The potential for a great day is always there and even an average day on the jetties can leave you wondering why you even fool with the lake!