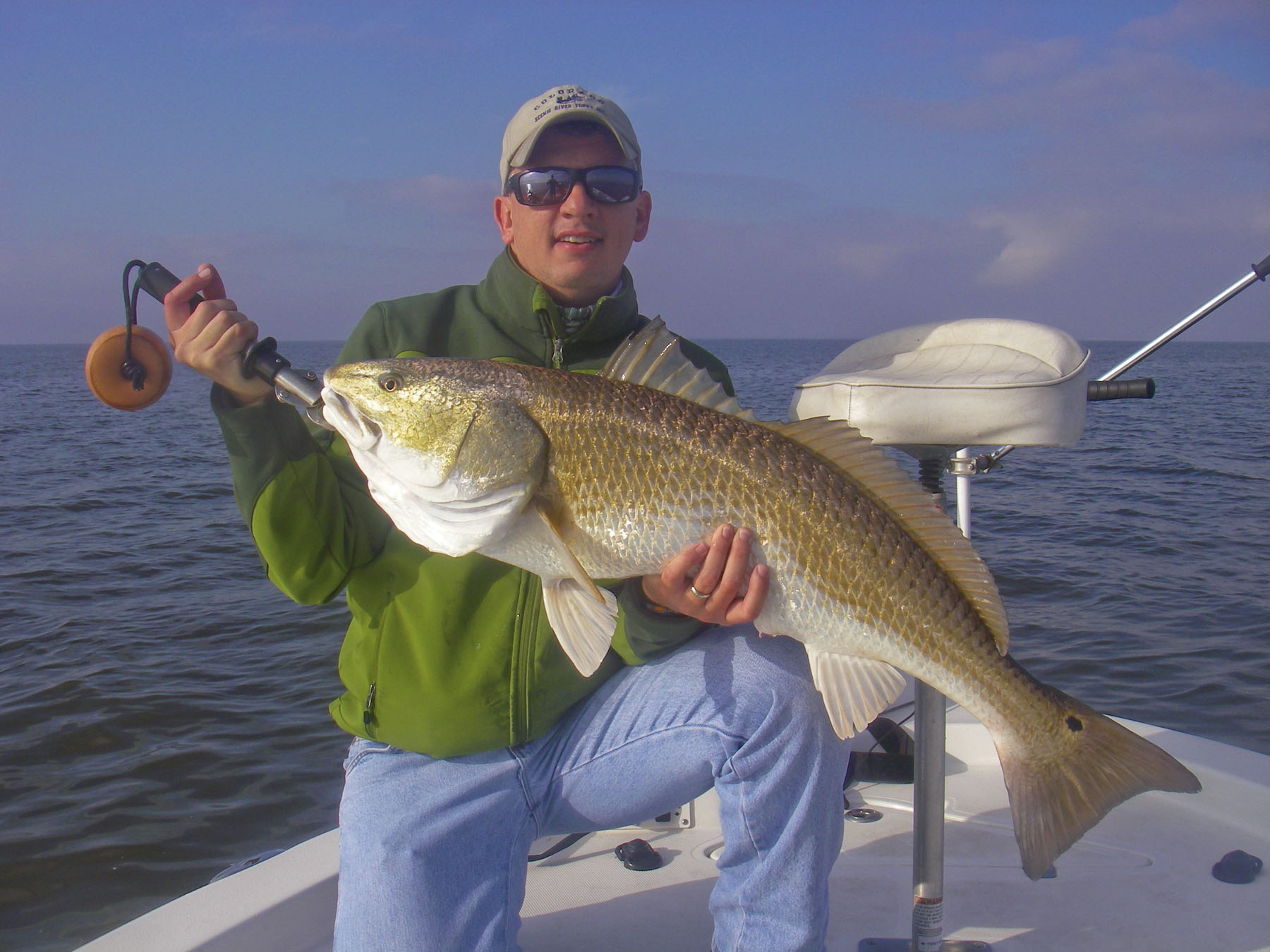 David Laman's oversized red ate a 5-inch Assassin Shad.
With boat shows and freezing weather pretty much in the rear view, it has been business as usual on Sabine. It costs us a heck of a lot more to get where we are going than it did this time last year, but once we are there the catching has been good.

Because the most coveted trout of the year failed to show up on the shallow flats with any consistency all winter long, we are all hoping that they are simply late and that this will be the month. It wasn't that they were not on the flats, but more a case of them spending very little time in the skinnier water due to the incredible numbers of redfish that simply crowded them out.

The few big trout we have caught were taken in five to six feet of water and that pretty much excluded our better wading areas. We just could not eliminate enough pieces of the puzzle to warrant spending most of the day hunting trophy trout in a hundred-plus square miles of water with an average depth of seven feet!

The redfish are not going anywhere and they have been a blessing in their own right, but the difference this month lies in the fact that the larger trout will start relating to hard structure in that deeper water. Isolated shell pads, small clam shell reefs, the major oyster reefs on the south end of the lake and the revetment walls will eliminate a lot of wasted casting for trout fishermen.

I would not be at all surprised if we have the best couple of months we have had in years on the Causeway reefs. The water is in great shape with good salinity levels and there is shell from two to twenty-two feet deep. Even the lightest incoming tides usher in shrimp from the Gulf and the fish are right behind them.

This area gained notoriety years ago not only because of the size of the trout, but the manner in which local anglers chose to dissect it. For years everyone employed the same technique eventually termed "dredging." It is simply a matter of getting a plastic tail on the bottom and dragging it over the shell on extended drifts.

That technique still works, but more innovative anglers have since discovered that everything from a She Dog to a Catch V will work just as well fished over the shallower shell lining both the east and west shorelines. I have made a living this winter swimming bulked up paddle tail plastics like Assassin's Die Dapper and TTF's Flats Minnow XL over the shallow flats on the north end and I cannot wait to try them over this deeper shell.

As the water continues to warm, the fish will move up on the shallow flats south of the islands and feed on a much more frequent basis. When that happens, any scattered shell as well as the revetment walls will hold fish all day long. It is probably only because we choose to throw them more often, but we catch most of our larger trout fishing early and late with MirrOdine XL's, Catch V's and Corkys.

Once the fish start frequenting the revetment walls you can add the Catch 2000 and Swimming Image to the mix. Tails can be equally deadly, but there is something about watching a big trout do its thing nearer the surface!

I have found that the five inch paddletails mentioned earlier perform much better when I swim them on a 1/16 or 1/8 ounce Pro Elite head, but we have caught a world of fish this winter fishing them under a Kwik Cork as well. The same lighter heads enable the tail to drift down more erratically after each pop and that usually seals the deal.

If the shrimp show up earlier than usual, you will catch better numbers by downsizing to the smaller Sea Shad or Flats Minnow even when fishing them under a cork. The four inch versions also work much better for me when fishing the drains and flooded Roseau for flounder. You are still going to have to fish your way through the redfish when targeting flounder, but I can think of worse problems.

It has been brought to my attention more than once that I seldom if ever report on the fishing south of the Causeway, but I don't feel qualified to do that. I have no doubt that the fishing down there is far more consistent and diversified than it is in the lake and rivers combined, but I lost my soul on the north end forty years ago and the magic is still there for me.

Take no day for granted and keep the fun in your fishing!