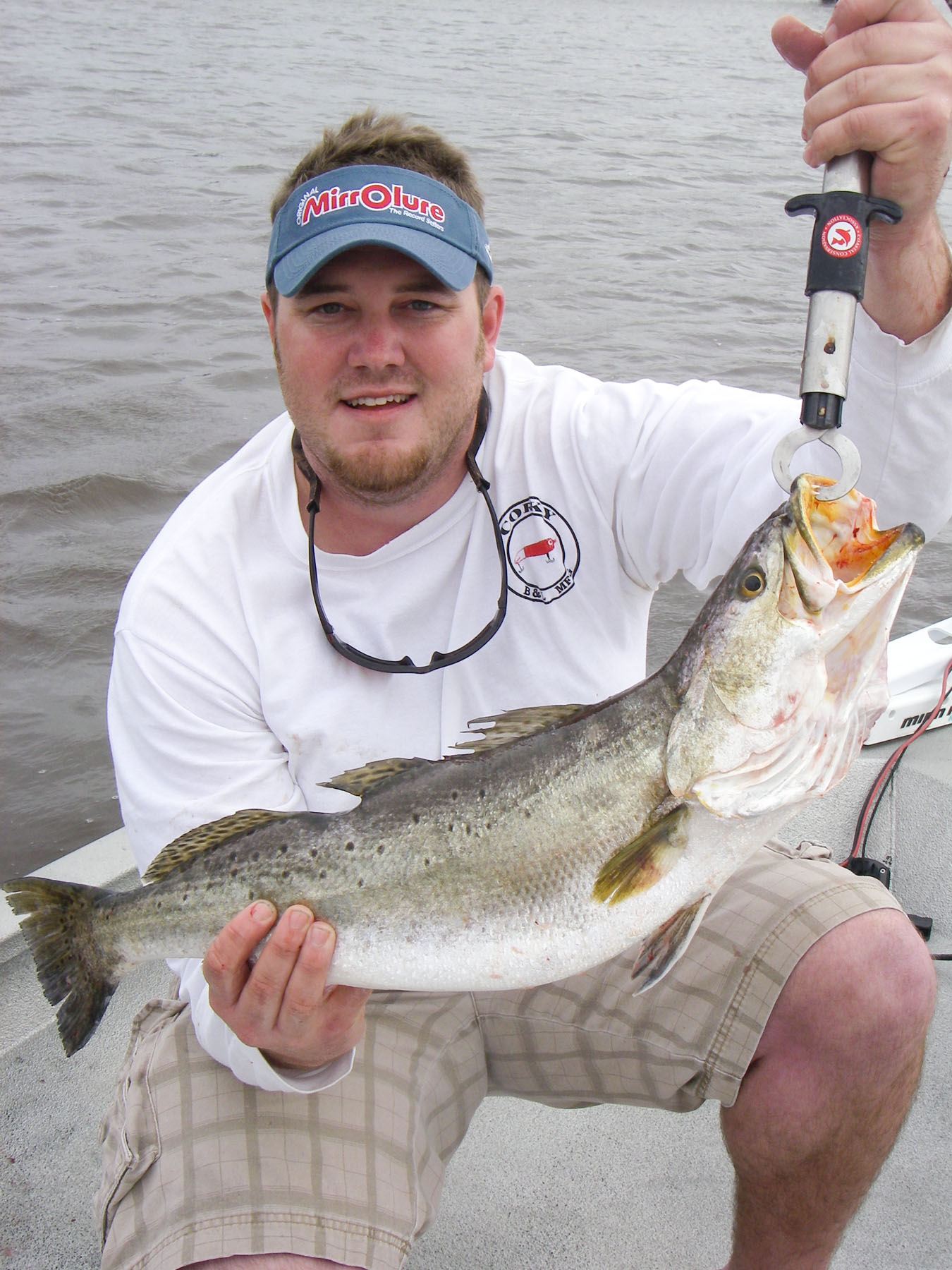 Gas prices and salinity levels passed each other headed in opposite directions recently and the result was that we were doing a lot more fishing than catching on Sabine. While the fish were on the move due to all the fresh water, fewer local anglers and guides were eager to track them down given the rising price of gas.

Surprisingly, while the river bite has slowed to a crawl, the bite in the ICW and ship channel is recovering quickly. Birds should start working over schools of trout and redfish on the south end of the lake this month and the Causeway oyster reefs will deservedly get a lot of attention.

To best take advantage of what I call "scratching the wall", rather than randomly fishing miles of shoreline with identical structure, keep your eyes on your depth finder and target suspended bait. Fish slow enough to take advantage of the tide and fish vertically as much as possible.

Color choice depends on water clarity, but the Die Dapper with its big paddletail is lethal for this type fishing. When the fish are a little more finicky, usually after the transition to a shrimp diet, the smaller Sea Shad is a more productive choice and will still dupe the larger trout. This is also the time to use a heavier jig as there is no benefit in waiting for a tail to sink 12 to 20 feet deep.

Both the Corky Devil and Maniac Mullet are also excellent choices for fooling the largest of the trout hanging on these deep breaks. Simply lower them and drift through these suspended fish. Pink and glow-chartreuse have been very good options of late.

Depending on wind direction, the revetment walls can get red hot for limits of solid trout this month and it is a bite than can often last all day long. The mistake that many folks make is parking on top of the fish and casting to the rocks. While they are drawing blanks, the folks walking those rocks are casting in their direction and catching fish!

When the fish are hustling shad and mullet against the wall, everything from topwaters to tails will work. She Dogs in bone-silver and the new Geaux Daley color are consistent producers. When they won't eat a topwater, shallow diving crankbaits like the Swimming Image or Strike Pro Bubba are hard to beat.

They only dive 3 to 5 feet deep, but they are effective even on fish holding well off the shoreline. I haven't done as well with the Corky fishing the rocks, but Catch V's and 2000's in green or black back w/white sides can be devastating even during the hottest hours of the day.

It is far too early to put away any of the suspending baits when fishing the shallow flats on the north end or what is left of the grass between Madam Johnson's and Greens. The larger trout and redfish are still running mullet in 2 to 5 feet of water and there are no better imitations. For that same reason we also score better with the longer 5-inch tails rigged on 1/16 ounce heads.

After abandoning jerkbaits like the Bomber Long A and Cordell Redfin for years, I have come full circle and done well lately with newer versions like the MirrOlip and Arc Minnow. More often than not, when the trout won't totally commit to a noisier She Dog they will just crush a jerk bait as it floats back up to the surface.

When fishing the open lake, at least one of us will be fishing a tail under a cork. That is the one setup that not only catches fish year round for me, but keeps even the most inexperienced fishermen in the game. A 2 to 3-foot leader and a 4-inch Sea Shad or Flats Minnow completes the rig.

I don't think the lion's share of our flounder population ever migrated this year. The bite never slowed down and we are already catching about as many flounder as redfish when pounding the cuts and Louisiana shoreline with everything from Gulp Mullets to spinner baits.

While every angler hopes to never need this service, I am pleased to inform that we now have a 24-hour towing service on Sabine. SeaTex Marine Service, located under the Rainbow Bridge, will respond to your call any time night or day and will do everything from hauling you back to safe harbor to simply bringing you gas or jumper cables. Their phone number is 409-724-7288.

Load up the kids and come catch fish on Sabine Lake with us!