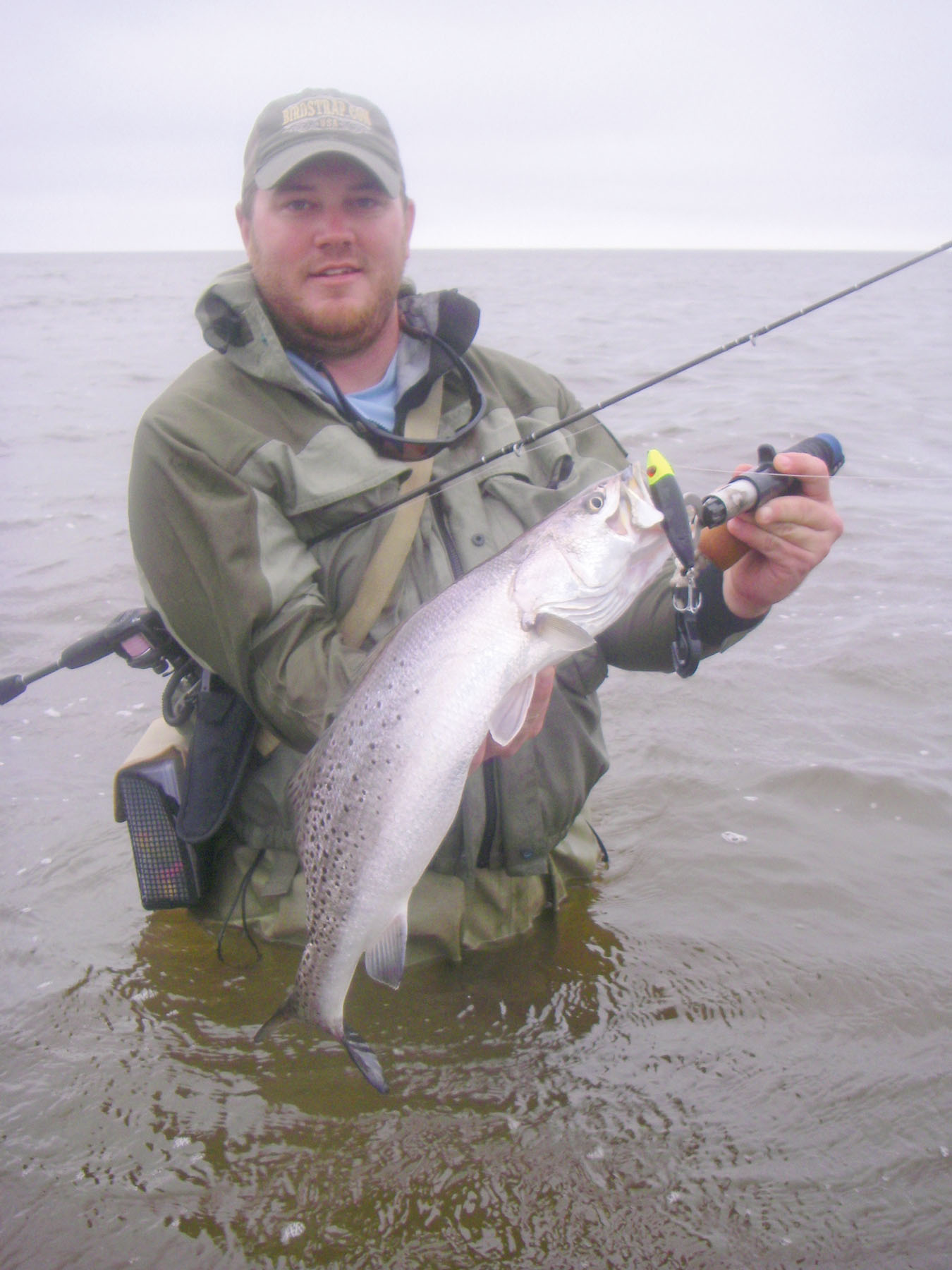 Topwaters have been the ticket on the larger trout.
By the time you have received this month's issue of TSFMag, Sabine Lake will once again be the main draw for area fishermen. That has not been the case ever since the city of Orange got the nod to host the first Bassmaster Elite tournament of the year in mid-March. Wrapped bass boats, crowded restaurants, and even an occasional traffic jam were the order of the day as the pros were in town scouting months before the actual event.

People that don't even know what a bass is were eager to rub elbows with ESPN cameramen and the pros themselves. Orange had its bases covered and rolled out the red carpet, but quickly discovered that these tournaments are not a one week affair!

When local anglers weren't riding shotgun with a pro on one of the rivers or bayous or referencing points on a Google map, we were taking advantage of what has been one of the best big trout bites on Sabine Lake in the past several years. The much anticipated bite started earlier than usual and it is still going on. The only notable change is that the big fish are no longer as concentrated as they were in the colder months.

We lost a number of days to unfishable winds and more rain than most of the state has gotten, but even the tiniest of windows has rewarded us with some great trout. An eight pound trout still turns heads, but it's the numbers of five to seven pound trout that have made this a memorable year.

While the Louisiana side of the lake has given up the majority of the larger fish thus far due mainly to more protected water, the flats on the north end will steadily improve through early June. Look for fish transitioning from the deeper water of the ICW to the shallow flats on either side, especially early and late in the day.

For some reason, and it's not because we don't fish them a lot, topwaters like the She Dog and Skitter Walk have consistently produced better than anything else in the box. Black/chartreuse, chartreuse/redhead, and pink have worked especially well.

It should come as no surprise that the Fat Boy has also worked well enough to once again create a mini-shortage at area tackle shops, dayglow and Texas chicken are working very well.

Because we have been doing so much wading and fishing in water less than four feet deep, I have been rigging an Assassin Die Dapper on the lighter TTF Shiney Hiney head with the glow eyes. The weighted portion of the hook is inside the body and the barbell eyes help keep the five inch paddle tail bait from rolling over on a slow steady retrieve.

I have done so well with this set up that I probably fish it more than anything else, even when clients are hammering fish on another lure. Trout, redfish and flounder love it. I have done better running it as swim-bait rather than bumping it off bottom.

There are a number of good swim-baits and another favorite is the three inch H&H Usual Suspect. Every color has its day, but I have a lot of confidence in 159 and 201.

Over-pressuring small areas of the lake will not be a problem this month as the bite on the revetment walls and the Causeway reef will also catch fire. You will have to cede stretches of the walls to the bank fishermen fishing shrimp under a cork, but there are some good fish to be caught just out of their casting range.

Crankbaits like Catch 2000 and Swimming Image and larger topwaters like the Spook in clown or trout patterns can be very good throughout the day. Not unlike fishing the Causeway reef, picking the right color tail can be a challenge when fishing these trout, but it is akin to magic when you do.

Drifting the massive shell reef on clearing, incoming tides is a program that will also attract lots of folks this month. Fortunately, it is a bite that can be successfully fished by a large number of anglers at the same time when boating etiquette prevails. Aside from picking the best color and length of tail, the key to consistently catching trout is controlling the speed of your drift. A drift sock, sometimes two, is as necessary as a good supply of extra jig heads!

The bonus to this program, at least visually, are schools of redfish chasing ribbon fish that may surface within casting distance at any time. They will eat anything that you can launch into the midst of the melee.

Don't leave the kids at home!