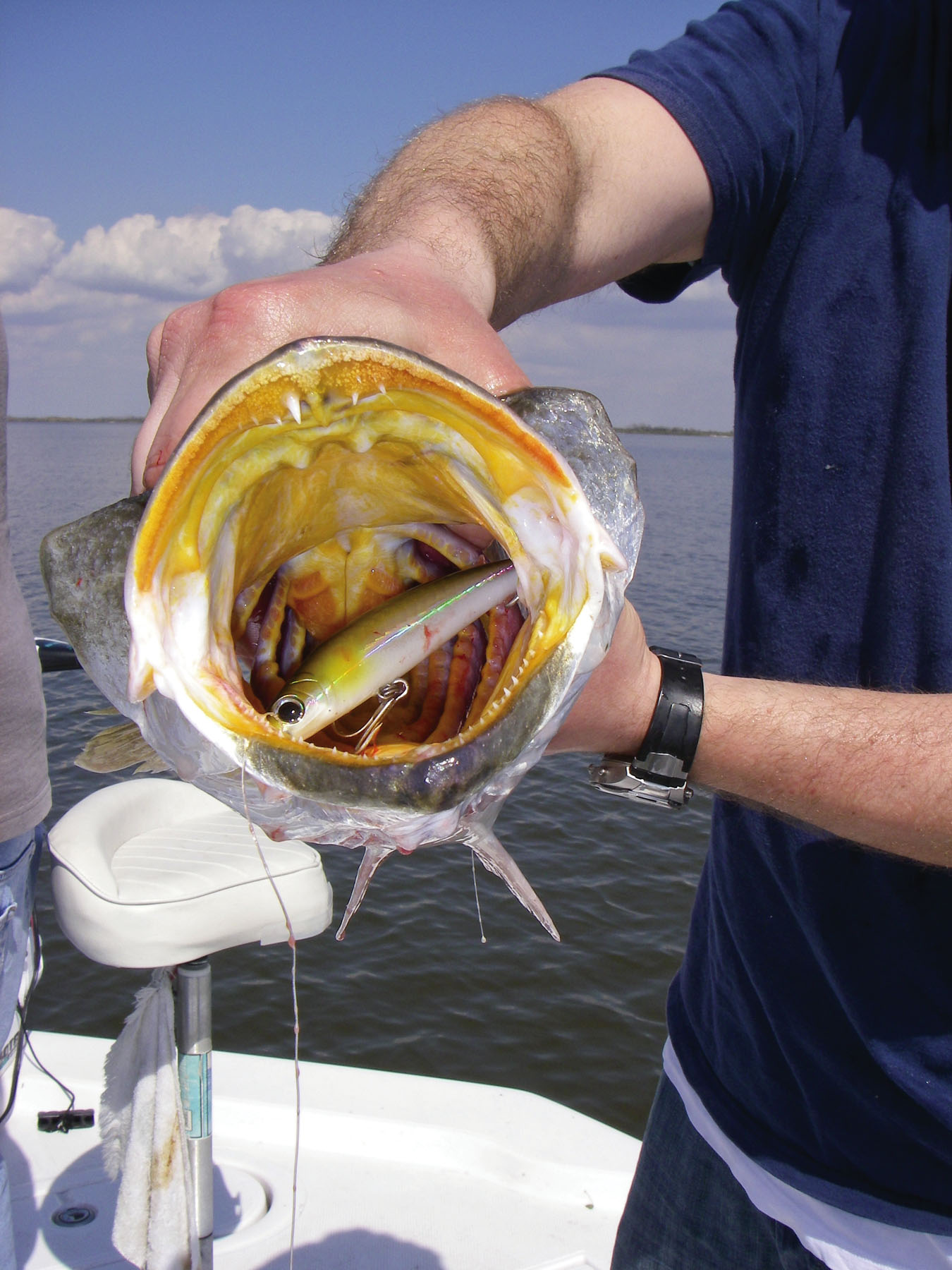 Big trout will definitely eat some small lures.
Longer stretches of warmer days have changed the landscape on Sabine. The flotilla of boats that wedged into one or two small areas through January and February is no longer a daily occurrence.

The only carryover from the patterns and techniques that worked so well in the colder water has been the use of smaller lures and this is not simply a case of angler seeangler do. As a rule, smaller lures usually generate more strikes but fail to dupe upper-end fish. Thus far, however, the smaller baits are fooling not only more but some bragging size trout as well.

I do not advocate turning your back on proven winners like the Fat Boy, Maniac Mullet and Catch V any time soon but we are currently scoring more consistently with the smaller Soft-Dine, Catch 2000 and also the Crazy Croaker. In addition to scaling down the lure we are also catching most of our fish while targeting the upper portion of the water column with a quicker retrieve.

In spite of water visibility at eighteen inches one day and five the next, the major flats bordering the ICW on the north end continue to hold decent numbers of four to seven pound trout. Afternoon incoming tide is prime time.

Ironically, when the fish aren't selling out on the smaller mullet and shad imitations we are doing better with the longer five and six inch tails. The Die Dapper and Big Minnow XL on 1/8 heads can be deadly in that same "upper column" zone. Don't be concerned with jigging it; swim it slow and steady.

Prior to the surface temperature spending more hours in the mid-forties than the high fifties, catching a limit of redfish required nothing more than bouncing a tail off isolated patches of shell in eight to twelve feet of water. That guaranteed bite has waned, however, as the bait and the fish begin to scatter throughout the lake.

The more reliable redfish bite is currently taking place around the mouths of the drains on both incoming and outgoing tides. The trout are holding in those same areas as well, but that bite ceases the minute the redfish crash the party. When the fish aren't there, look for them to suspend in four to five feet of water a cast or two off the shoreline. Be ready to plant your Talon or kick the anchor over the side as soon as you get a strike as these fish will hold in sizeable schools that you don't want to drift through!

Ferreting out suspended schools of solid trout over the next two to three months is the key to consistent catching, even on the windiest of days. A drift sock or even two is essential to slowing your drift while making long fan casts.

For my money, there is no better tool for locating these fish than a four inch paddle tail or VuDu shrimp fished under an Assassin Kwik Cork or H&H's TKO. The lure stays in the strike zone the entire time and the subtle popping noise proved its value long ago. I also feel confident hunting these fish with a three or four inch Usual Suspect Swim Bait as you can easily probe different depths and the paddle tail produces a ton of vibration.

The major surprise of late has been how quickly the flounder bite rebounded both here and in the Galveston area. I don't know why they ever migrated south if they were going to race back to 49 water. The numbers have not only been impressive, but the size as well. We have not targeted them a single day but are catching a few most trips in the 3 to 5 pound class. They will crush the new Soft-Dine as well as the 3-inch Usual Suspect.

I have had more clients buy into the undeniable advantage of braided line this year and part of that switch is due to not having to deal with the dreaded wind knot. The solution to that problem is fishing with a Laguna Rod with the cyclone wrap. The wrap funnels the line beneath the rod and loose line seldom if ever wraps the downward-pointing tip. Not having to deal with the power of the rod spine all day is much easier on the wrist as well!

I know lots of Sabine Lake visitors make a point to stop by Daley's Hunt N Fish both coming and going, but you might schedule in a little more time on your next visit as their new 10,000 square foot store can be a tad overwhelming. The new store includes a multi-media room for hosting seminars and they now have in-house rod, reel and troll motor repair as well.

There's a youngster waiting on your invitation to go fishing!