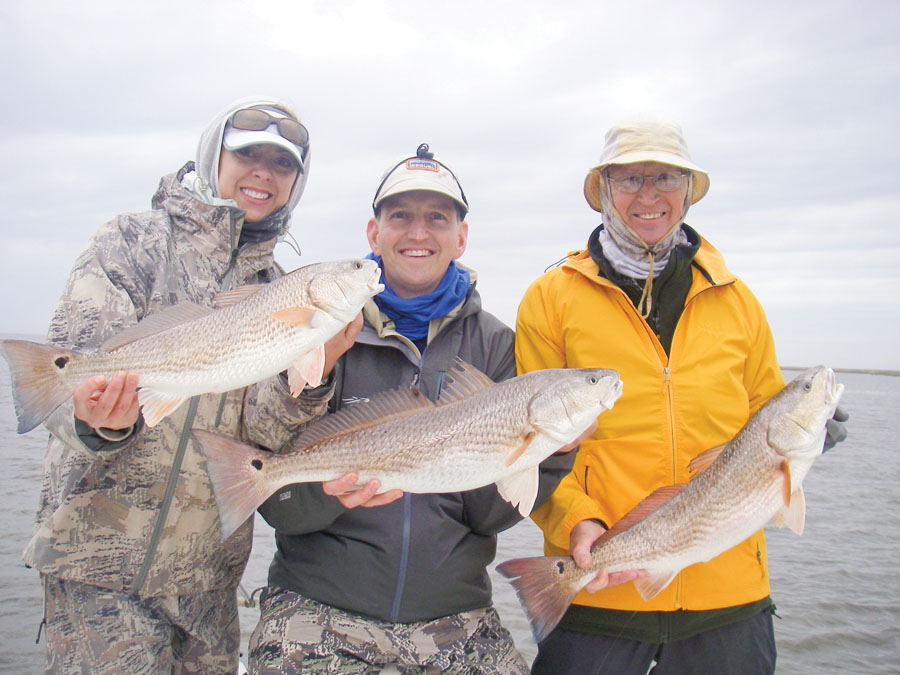 Another fresh cold front didn't bother the Maloys!
I cannot recall the last time every guide from Baffin to Sabine I talked with at the Houston Fishing Show was not only pleased with their current bite, but anticipating a more consistent year as well. I visit with several of the Calcasieu guides on a regular basis and they are no less optimistic as only the brief cold snaps have slowed a very good trout bite.

I didn't personally catch the number of trout over the seven pound mark that I usually do January through early March, but that has been more a case of my being at the wrong place at the wrong time than any presumed shortage of bragging size trout in the lake. Hardly a week goes by that someone doesn't send me a photo of another big trout and several of them have exceeded the nine pound mark.

The most common thread in their reports has been that the majority of these fish were caught in water a little too deep for wade fishermen, adjacent to flats, in four to six feet of water. They have been caught on everything from topwaters to tails.

When fishing tails such as the Assassin Die Dapper or rat tail Sea Shad, we are doing much better rigging on 1/16 or 1/8 heads. The benefits of the slower fall are undeniable when it comes to duping the larger trout. For that same reason, we have also opted for the Fat Boy Floater and the slow sink Maniac Mullet. With water clarity averaging less than a foot most days due to the wind, we are relying on pink or day-glow most of the time. Don't be afraid to tie on a darker color, however, as I haven't been the one catching those big trout of late!

The bulging incoming tides are not only ushering in saltier and clearer water but more baitfish and predators as well. The flounder can be found patrolling the shoreline pounding away at massive rafts of tiny shad and that action will only improve this month. Don't expect quality trout to tap into this nomadic buffet, but it is not unusual to find small schools of slot reds blowing showers of shad all the way up into the marsh grass.

There is probably no more dependable choice of baits to take advantage of this bite with than the four inch Gulp swimming mullet rigged on a quarter ounce jig head, but I prefer to at least start with a three or four inch Usual Suspect swimbait. The trout like it as well as the reds and flounder.

The wild card this month is dependent on how much rain we get and how long the trout and redfish hold on the deeper Causeway reefs. It is a very unreliable bite, but it can just be stupid good when conditions are right. The redfish will usually school and feed on the surface some time during the day, but the trout tend to stack in the guts in the shell anywhere from 10 to 22 feet deep.

Every fisherman on the water knows he can bounce a tail off the bottom and catch these trout at the beginning or end of a good tide change, but those anglers that consistently catch more fish target the trout suspended higher in the water column as well. Any of the mullet imitations from Catch 5s to Corkys as well as a four inch Usual Suspect work well when the trout are feeding 2 to 10 feet deep over much deeper shell.

Flats behind the north-end islands and the revetment walls will deservedly also attract a lot of attention this month. Tide changes are the name of the game as the trout tend to move in and out of the deeper ICW to feed on shad and finger mullet. I guess the Heddon Swimming Image will forever be popular when probing the revetment wall rocks, but trout on the flats will eat a wide variety of lures and a large percentage of these will be five pounds-plus!

With each passing year, and they seem to be passing much faster of late, I grow even more appreciative of the folks that took the time to introduce me to fishing as a boy. Their kindness changed my life forever for the better and I encourage each of you to do the same starting tomorrow. You can't help but feel more special and, more importantly, so will that youngster!