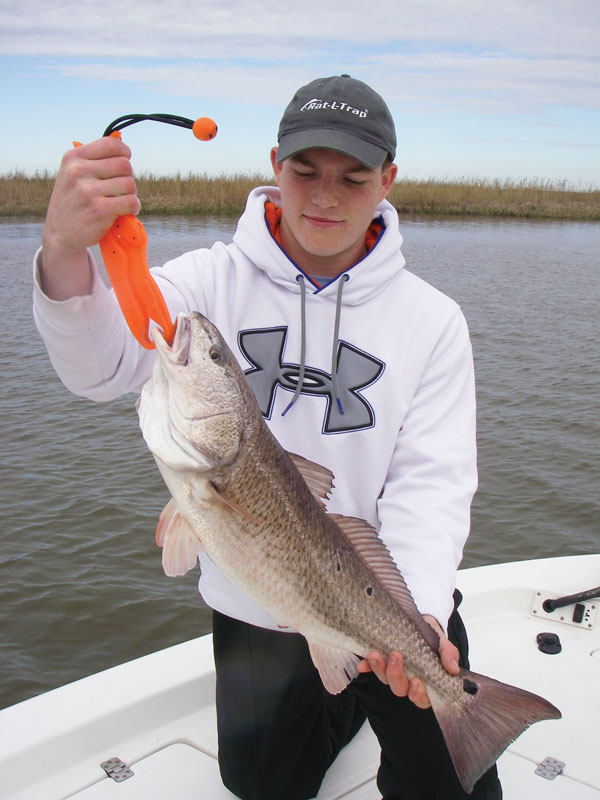 Redfish and kids get along just fine. CPR!

No rain for three consecutive days is considered to be a drought around here and a much appreciated respite on Mother Nature's part. The SRA was finally able to cut back on the discharge rate on Toledo Bend and we are once again enjoying improving water conditions.

The combination of stronger incoming tides and less fresh water should be just what the doctor ordered to ignite what has been a hit and miss bite at best thus far. Not surprisingly, the flats on the north end of the lake have not only rebounded the quickest, but provided the most consistent action as well for both trout and redfish.

The trout that held up in the deeper waters of the Intracoastal waiting out better salinity levels are now cruising the nearby shallow flats on a more frequent basis. Of late, regardless of the tide direction, the first and last hours of daylight have been the most productive. There is also no doubt that when the fish are feeding they are doing most of their hunting in close proximity to any type of subtle structure change.

When wading or even drifting, be quick to stop and make repeated casts to the same small area following a strike. A small patch of clam or oyster shell or an isolated hump will hold multiple fish. As the available bait supply improves, the fish will scatter all across the flats, but at least for right now I would recommend checking these isolated spots repeatedly throughout the day.

With surface temperatures already in the high 60s and low 70s there is nothing in the box they won't hit, depending on their mood. While that is a blessing of sorts, I invariably wonder if I am throwing the best lure or best color even when I am already catching fish.

Because the options on their menu now include smaller baitfish, we are catching more fish by downsizing with our baits as well. This is not to say that they won't crush the largest topwater in your arsenal nor is it meant to imply that bragging size trout won't inhale a smaller offering. Stowing away your Super Spooks and Fat Boys, however, is a big mistake!

While I realize that not opting to throw a tail rigged under a popping cork is more about angler choice than anything else, it is also a mistake to think that the technique produces great numbers, but not big trout. The cork is seldom if ever my first choice when targeting our largest trout, but I have countless photos of trout over seven pounds that we have caught on both Calcasieu and Sabine Lake on tails dangled beneath a cork.

A Corky Devil, of all things, fished beneath a cork resulted in one of the best big fish days I have ever experienced. One of my three clients was cold and bored and had no interest in keeping his Corky in the strike zone. Out of frustration, I rigged his under a cork and by the end of the morning, it was the technique of choice for the entire group.

While I think there is no better choice than a MirrOlure Lil John rigged under the oval TKO cork, I would never feel like I was in the penalty box having to fish a 4-inch Assassin Sea Shad under it as well. There are days when the cupped cork works better in a chop, but I prefer the subtle click of the oval cork and it eliminates added resistance when fighting the fish.

I fish this set up with a seven foot medium action Laguna spinning rod and Shimano Stradic spinning reel filled with 30-pound test Seaguar Smackdown braid. I previously used 20-pound test with other braids, but the smaller OD on the Smackdown makes it perfect for spinning reels.

As the water continues to warm and saltier water pumps its way into the lake, the Louisiana shoreline will attract more bait, fish and anglers. We have already enjoyed an earlier than expected bite with the flounder and the redfish are never far from the nearest school of juvenile menhaden shad parading down the shoreline.

The Game Reserve is also open now, but requires a non-resident Louisiana license to fish. Remember–if you launch in Texas you can only keep Texas-legal fish.

A youngster will never forget a day spent fishing with you!