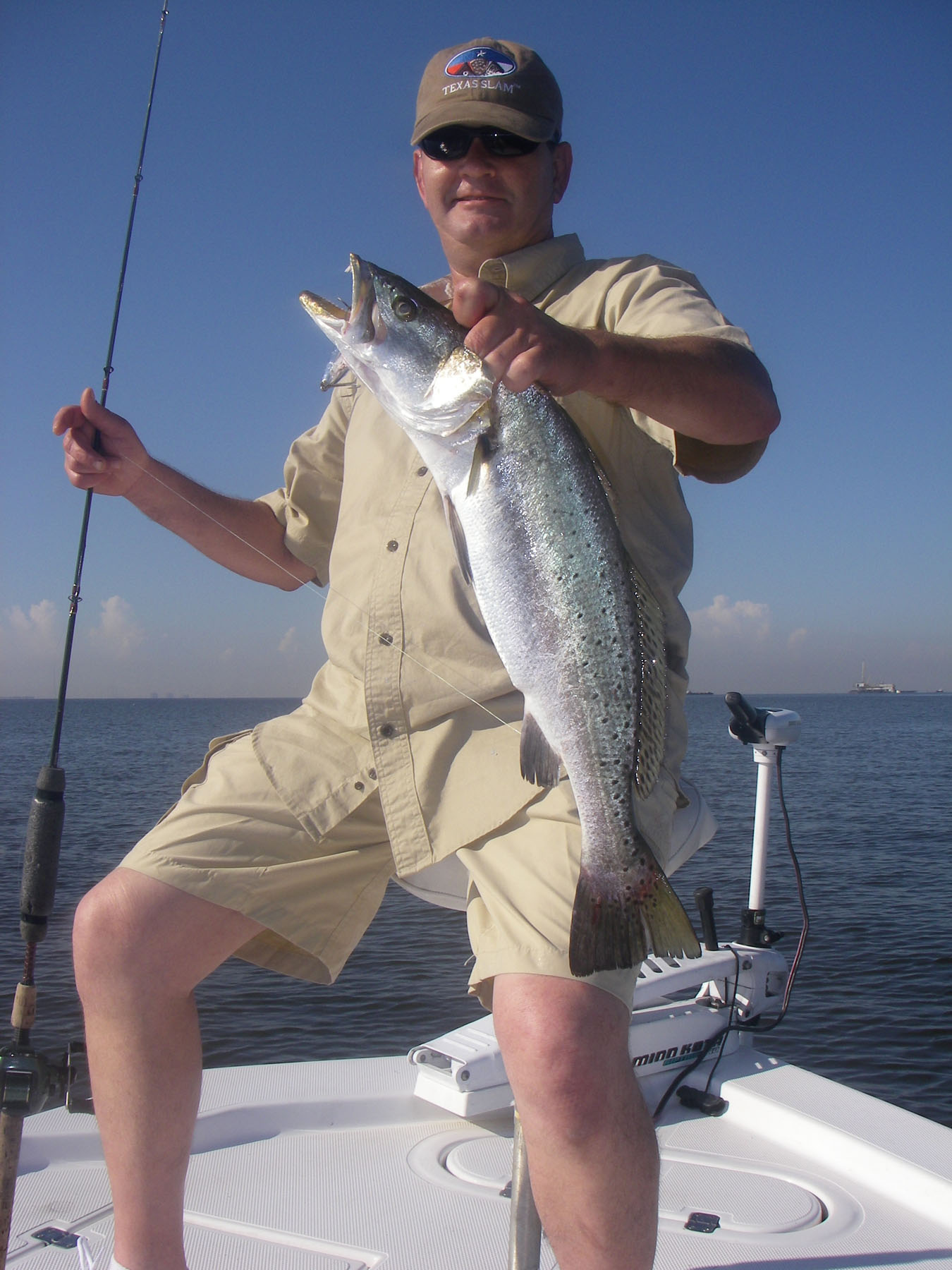 This big trout fell for a bone She Dog.

It was simply a matter of timing... bad timing!

The cast net had all but touched down when the gator suddenly surfaced in the target zone. Not unlike the pitcher that would love to retrieve a hanging breaking ball, the result was predictable. The immediate surge against the hand line indicated that the predator had not eluded the monofilament mesh.

I would gladly have given him the mangled net, but felt an obligation to try to free the toothy reptile. The only person that enjoyed the next twenty minutes of hand-to-hand combat was the wide-eyed nine-year-old shouting encouragement over his Dad's shoulder from the back of the boat. The gator eventually left the scene free of the unwanted net and I suffered only a minor bruise inflicted by his thrashing tail.

Once our shad mature, we do our share of live bait fishing from mid-July well into the winter months. Unlike the majority of the fishing holes on the Texas coast, we fish very little live shrimp or croaker unless they find their way into our cast net. Along with the shad, we rely on small finger mullet and mud minnows.

Many of the guides that work out of the extreme north end of the lake start their day cast netting shad as a Plan B. On more than one occasion, I have fished all day long and never used the first shad, but they were there if needed.

The mortality rate was never that bad with a little ice and a good aerator in the livewell, but the secret to keeping them all alive has been the addition of an oxygen system I got from Jason Cogburn, owner of Boyd's One Stop in Texas City. His business is dependant on keeping bait alive and he was extremely helpful in pointing out what does and does not work.

When we fish live bait, we use one of three techniques, all of which begin with a light wire 3/0 Kahle hook. Easily the number one choice when drifting the open lake is to fish the shad or finger mullet on a three to four foot leader under a small popping cork. We generally start with a split shot a foot or so up the line to keep the bait down, but we will use no weight at all at times.

We also do well on occasion, especially on the larger trout, free lining the bait with only an in-line swivel for weight. When employing this technique, we add 12-14 inches of 20- pound fluorocarbon leader below the swivel.

We switch to the Carolina rig or fish finder rig when fishing live bait in the deeper waters of the Ship Channel or the river. The size of the weight employed above the swivel is dependent on the amount of current. Ideally, we prefer that it bounce across the bottom very slowly rather than holding in place. Very seldom do we use anything heavier than a half-ounce slip sinker.

Outside of the fact that slot redfish have been a little hard to come by on a consistent basis, we have enjoyed an excellent summer on Sabine thus far. A tremendous amount of rain has cost us a few days, but most of the lake has remained relatively clear through it all.

The flounder bite lasted much longer than usual and we have had an excellent run on trout in the 23-27 inch class. The last two full moons had us on the water well before daylight dealing with big trout on topwaters.

Live bait will rule as the weather continues to heat up in August, but you can still do very well with both tails and topwaters this month. If you are not fishing nights under a full moon, make an effort to hit the water an hour before daylight anyway. You will have to deal with the mosquitoes, but some of our largest trout will be caught before most of the folks even leave the house.

The flats on the north end of the lake attract huge schools of bait in the cooler pre-dawn hours and afford the larger trout a quick exit to deeper water as the temperature soars. Along with the She Dog, Super Spook, and Skitterwalk, we also do very well working the Catch V at a high rate of speed just beneath the surface.

Should you opt to stick with soft plastics, we generally upgrade to the longer baits like the Assassin or Split Tail Eel rigged on a very light head or even Texas rigged with no weight at all this time of the year. Water clarity will dictate color choice, but limetreuse, bone diamond, and red shad are hard colors to beat in August.

These are also the months to check out any and every slick you spot or smell in the open lake. You occasionally have to deal with the unwanted gafftop, but those little oily spots on the surface can produce some super topwater trout action. We never finish fishing one of these slicks without bumping something across the bottom as well before moving on.

It is not at all unusual to find redfish lurking beneath surface feeding trout. Aside from the soft plastic choices, you cannot beat a Trap or Hoginar when blind casting to redfish in Sabine Lake any time of the year.

It is still not too late for you or one of the kids to catch a S.T.A.R. winner. Even if it's only chasing crabs with a piece of string and a chicken neck, I hope that you will take the time to get the kids back on the water before its back to the classroom!