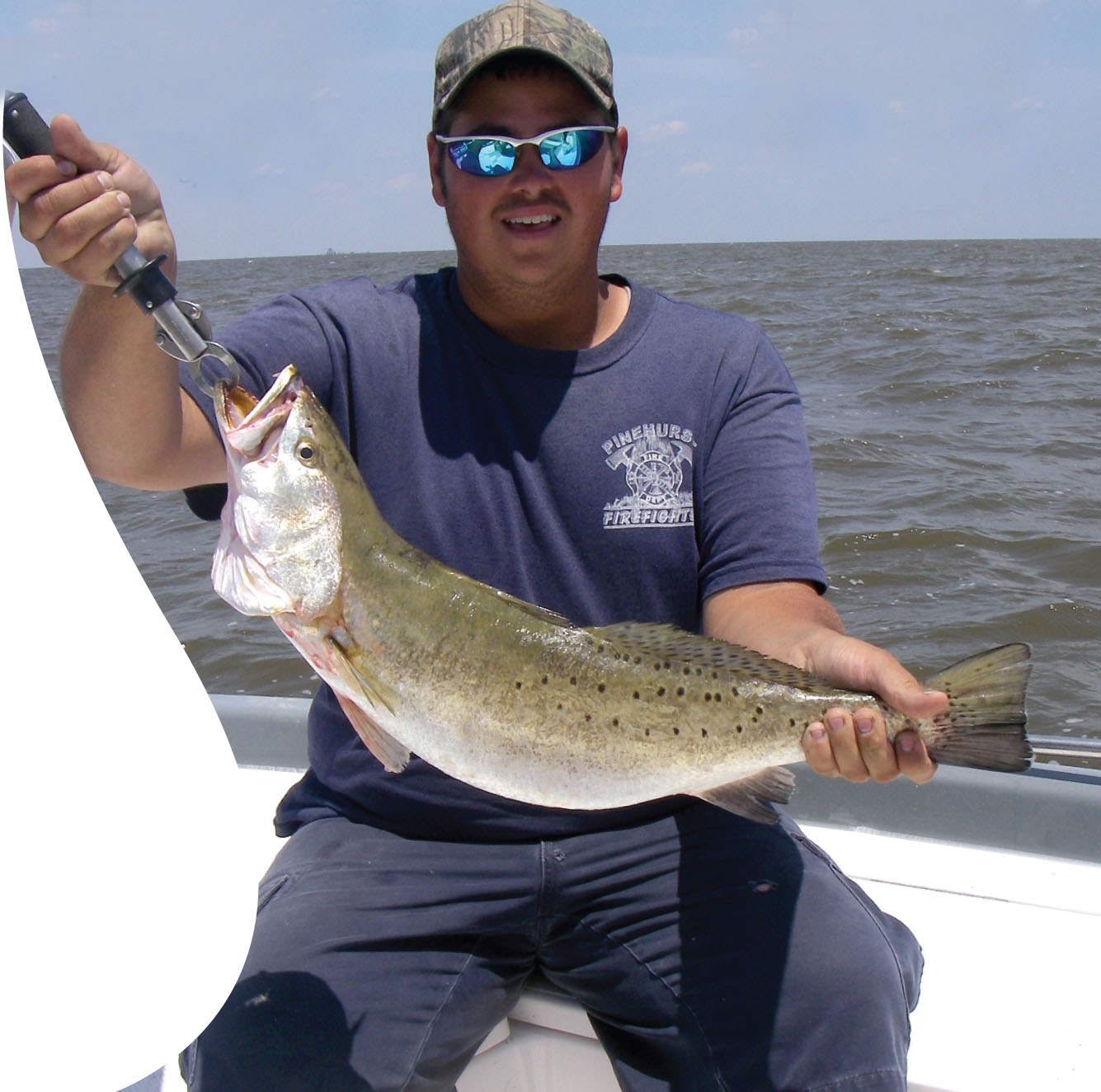 Kelly Ford caught and released his personal best speck to complete her spawn!
The past month has really been a case of the good, the bad, and the ugly for Sabine Lake fishermen. It all started with a series of unseasonable cool fronts that fortunately coincided with the beginning of the spawn and it was as good as it could get for a couple of weeks. Area anglers just pounded the big trout with everything from live bait to She Dogs and the folks at Bridge City Bait Marina were weighing in an 8-pound fish darn near every day.

Then, without warning, an unrelenting south wind returned and raked the entire length of the lake all day every day for three weeks. The bite was still decent, but you really had to battle the elements to take advantage. Immediately following that challenge, a dome of high pressure squatted on southeast Texas silencing the wind, but scorching everything outdoors in the process.

We continue to hunt any source of shade by noon most days, but we are finally catching fish a little more consistently both early and late.

The lake is covered up with schools of shad and mullet that are attracting trout and redfish. The schools of baitfish are so numerous, in fact, that observant anglers idling around the open lake can locate huge schools of feeding fish without the aid of gulls or terns.

While I am not fond of fishing the jetties, nor the short rigs, they will continue to provide the most dependable bite across the remainder of the summer. Live bait, whether it is shrimp, croaker, or finger mullet will account for very good catches of reds, trout, and Spanish mackerel on most days. Lure chunkers can also expect to score well right at dawn.

Very few local anglers fish with live shrimp on the north end of the lake, but they will catch their fair share of trout and reds this month fishing both finger mullet and shad. If you prefer to drift the flats or work the revetment walls, the better option is to either fish your live offering under a popping cork on a 3 to 4 foot leader or free-line it on a 3/0 Kale hook with a small split shot.

It has been a formidable challenge catching fish consistently on artificials in this heat, but fishing a good tide change very early or late in the day can still be very productive. Pre-dawn wades with a black-chartreuse Top Dog, Jr. tied on are not only more comfortable, but often yield mixed limits of trout and redfish by the time other anglers are just launching their rigs.

Once the sun clears the roseau, we fish slightly deeper with 5-inch Assassins rigged on 1/16 ounce heads or suspending lures like the MirrOdine XL and the Catch 2000 or Catch V. Depending on water clarity, and it should be outstanding, Opening Night, Texas Roach, and Bone Diamond are very dependable colors in tails while chrome-chartreuse or chrome-green back are hard to beat in the hard baits.

I will usually spend the remainder of each trip cruising the mid-lake area checking out every fresh slick while watching for ladyfish and game fish churning the surface in pursuit of shad. Do not abandon that program simply because an occasional gafftop crashes the party.

Once you locate the buffet line, there are very few lures that won’t work, but the task is made easier with a swimbait like the Crème 3-inch Spoiler Shad or a Sea Shad fished on a 24-inch leader under a Kwik Cork.

Depending on the size of the shad or mullet running for their lives, match the hatch by swapping the shorter Sea Shad for a 5-inch Assassin or MirrOlure soft mullet.

The beauty of those choices is that they are so user-friendly. The Kwik Cork-Sea Shad combination will catch fish even when unattended and the Spoiler Shad is most effective when simply flung as far as possible, allowed to sink, and retrieved at a slow, steady pace. The vibration of the tail and its likeness to the real thing make it an unbeatable lure to hunt fish with as well.

Fish smart and respect the heat!