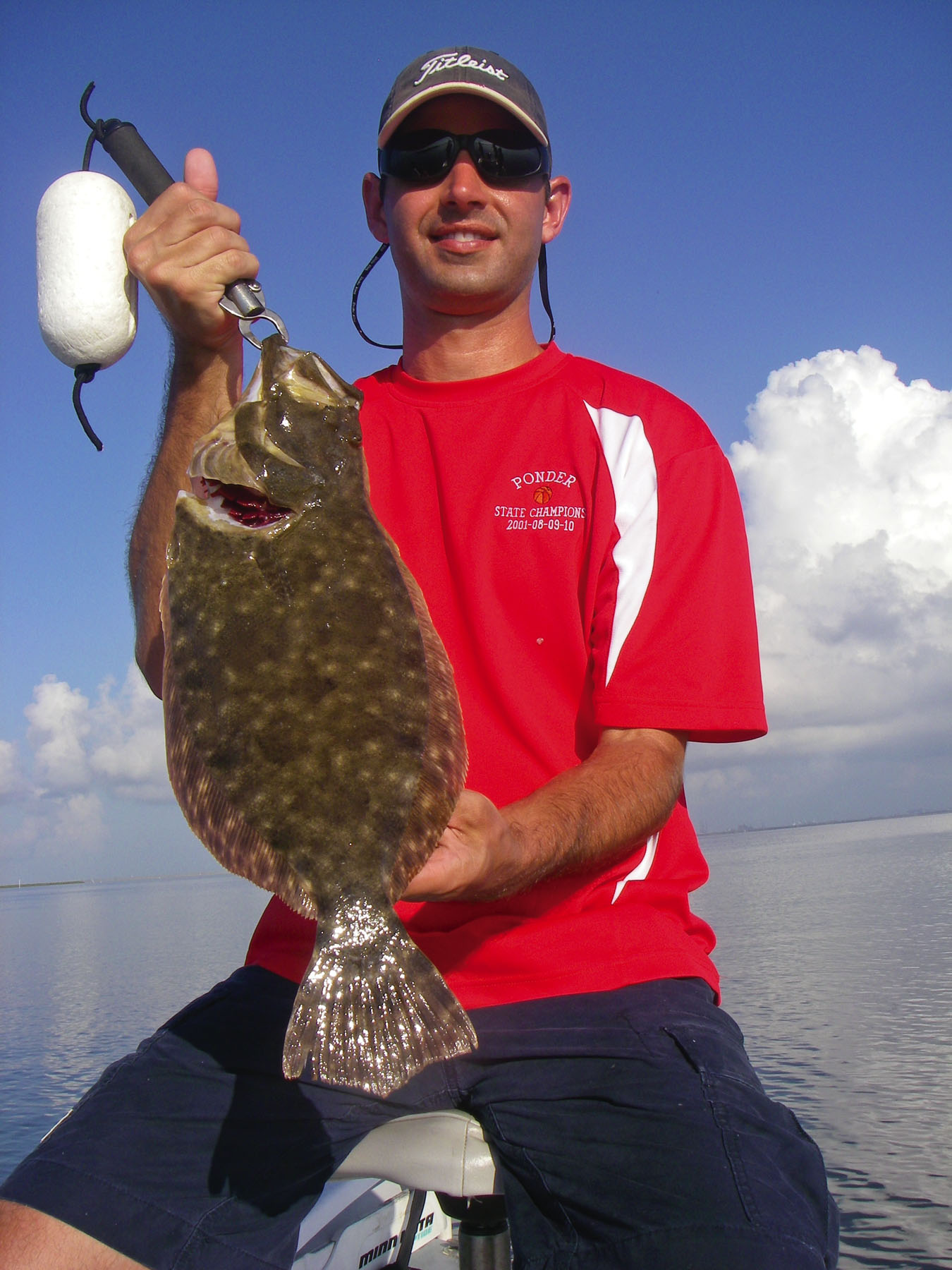 A great flounder bite is not getting much attention from Sabine anglers this summer.
Even with one eye constantly on the never-ending oil spill saga a short distance to the east and having dodged the first hurricane to enter the Gulf during June in fifteen years, the catching on Sabine remains as hot as the mid-day sun.

Aside from increasing the number of sharks we normally see in the lake, the elevated salinity level has lured the trout into the river as far north as I-10 and that is unusual for this time of year. The benefit of that phenomenon is that we have protected water to fish when the wind blows us out of the lake. I opt to spend the majority of my fishing time north of the Causeway anyway, not because the jetties and short rigs are not great areas, but more so because the bite in the river doesn't get nearly as much pressure as the rest of the lake.

The bite under the gulls has been so easy lately that it threatened to make lazy fishermen of us. While the birds are working all over the lake, I think the larger school trout are coming off the south end. If chasing birds is your bag, l would start my day on the northwest pocket of the Causeway reef at daylight and patrol a line from Garrison's to the RV Park. Multiple slicks often dot the surface well before the first birds arrive!

The schooling fish, both reds and trout are hustling shad and small shrimp. You can get it done most days fishing both the smaller Assassin Sea Shad and MirrOlure soft shad rigged on a quarter ounce head. When the frenzy on the surface slows we continue to catch fish by slowing down our retrieve or fishing the same rig under a Kwik Cork.

Having regained our senses, even with bird chasing on the agenda for later in the trip, we are cashing in on an exceptional trout bite that lasts from about 0500 until 0800 each morning. The water is cooler and trout up to seven pounds are prowling the shallow flats on the north end of the lake in search of mullet.

When they are really aggressive you cannot beat a bone or chrome Spook or Top Dog. If they are not taking the larger lures we immediately switch to a smaller offering like the She Dog or Skitter Walk. We have been successfully extending that bite by swimming a 5-inch Assassin Shad on a light head or fishing a Catch V on a very quick retrieve. Many of the strikes occur when the Catch V breaks the surface.

The redfish are back in the submerged grass again on the Louisiana shoreline and they will crush a spinnerbait or Crme Spoiler Shad. The grass has thinned out so swimming plastics or even fishing topwaters is an option. It doesn't happen often with the spinnerbait, but don't be surprised if a big trout crashes the party when fishing any of the other baits.

Only a handful of flounder fishermen are enjoying a terrific bite on fish up to five pounds and I do not know why. The schooling action is hard to ignore for the weekend angler, but five solid flounder are still coveted fare at the supper table. The points at the mouth of the bayous and passes are very productive on tide changes, but the most consistent bite is happening on the east shoreline of the lake. Any time the water is covering the root systems of the Roseau cane, and that has been quite often, the flounder are there. They will hit everything from Gulp to spinnerbaits most of the time, but the "can't miss" combination is a chartreuse or white 2-inch Assassin curly tail threaded on an 1/8 ounce horse head jig. Tipping it with a small piece of shrimp helps, but is not necessary.

You can easily spend an entire day fishing this program and never have to get off the troll motor. You are not going to miss many fish in spite of the small hook and it makes catch and release much easier. I prefer a 7-foot medium action CastAway spinning rod teamed with a 230 SX US Reel spooled with braid for this type fishing.

Coffee Ground Cove and the stretch of shoreline from Three Bayous to the rocks at Willow are prime areas right now. Flounder can be difficult to hold when removing the hook, but they deserve any extra time and care it may take to safely return them to the lake.

Cover the kids up with lots of sunscreen and a good hat and take them fishing before the summer passes you by. The future of fishing depends on them!