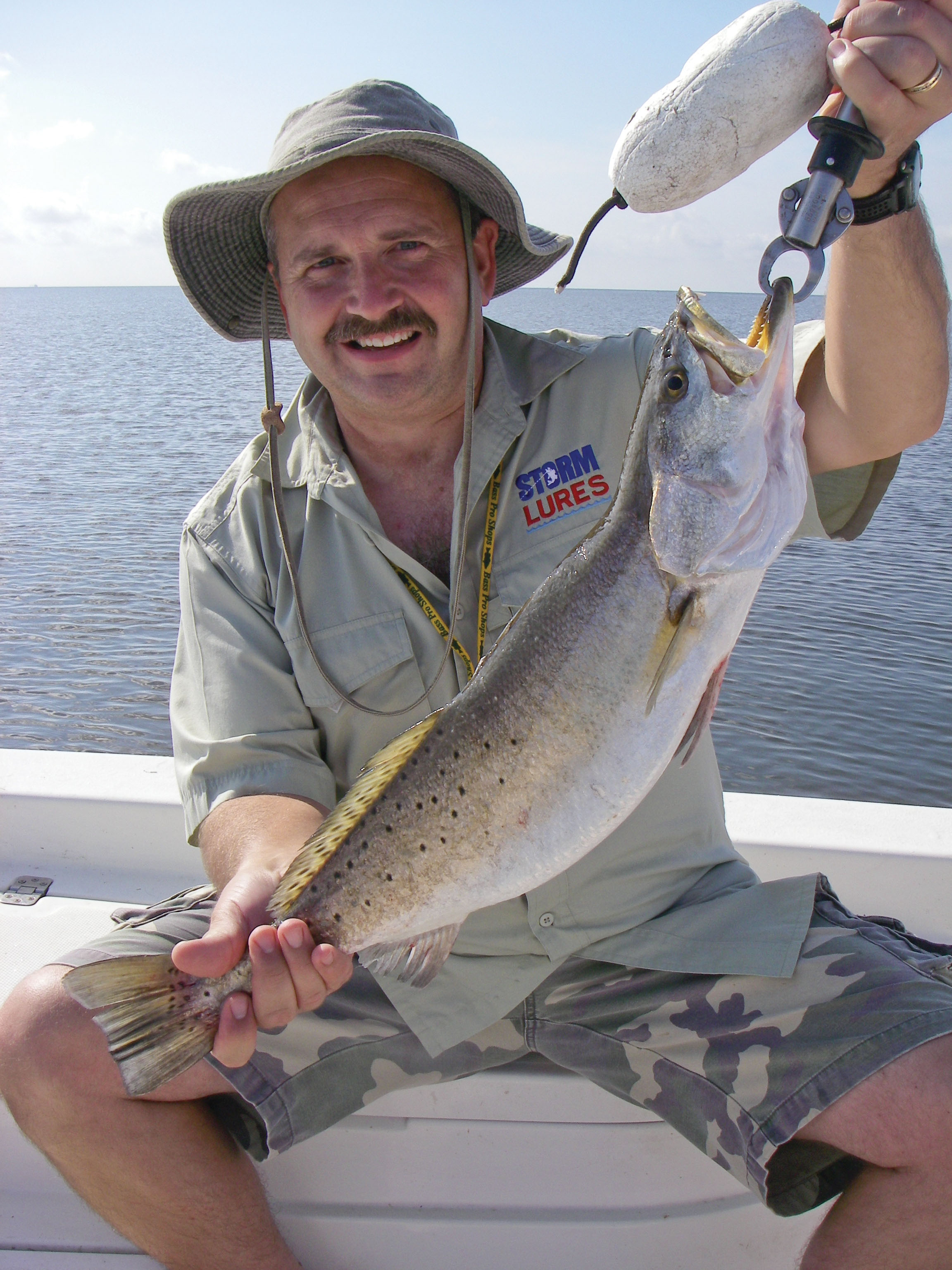 I think I have gone through more BullFrog sunscreen than outboard motor oil over the past month but the fishing on Sabine has been every bit as hot as the weather. The water is exceptionally clear in not only the lake but also the Neches and Sabine Rivers which translates to more fishing room for everyone.

We are two months ahead of schedule as far as the amount of bait stacking in the rivers. Trout, redfish and flounder are right behind them so it has been no big deal when an occasional windy day keeps us off the lake. As you would expect, bouncing a live shad or finger mullet across the bottom or fishing one under a popping cork is hard to beat if a fish fry is a part of your agenda.

Do not think for one minute, however, that live bait is the only game in town when fishing the rivers. There is no doubt that it is the best approach to duping big flounder, but topwaters, tails and crankbaits are equally effective on the trout and reds and they consistently produce the larger trout.

A good tide change is a must and any area where the current flow is altered is a prime place to start. She Dogs, the Geaux Daley and Geaux Trout colors have been extremely good, a bone River 2 Sea Rover, and 5-inch Assassin tails in Slammin chicken and needle fish have already produced a number of trout in the 7-pound class.

The bite in the lake has been text book for this time of year even with the exceptionally high tides. Pre-dawn wades to avoid the heat have been very productive. Due to the higher water, the bait is stacking up in very skinny water tighter to the shore and both the reds and larger trout are waiting on their arrival each morning. She Dogs and the Die Dapper rigged on a 1/16 ounce head have negated the need for any further experimenting most days.

The bite in the open lake has been equally good, but locating the schools of better trout has been a little more difficult for the angler that leaves the dock depending on the gulls to do the hard work. As a matter of fact, the terns have been a much more reliable resource than the larger gulls thus far. Too many folks make the mistake of ignoring or misreading the so-called liar birds.

If they are scattered and traveling they are not much help, but if they are holding even a little bit they are worth checking out. At the very least, they have found some bait and that is a key factor in locating open water schools of fish. The better part of finding one of these schools is that the terns will quickly leave and you will have the fish to yourself as there will be no circling birds to attract other anglers!

We are finding some fish chasing shrimp, but most of them are working on schools of shad right now. When the birds aren't working, we are simply idling around in the open lake looking for ladyfish beating up on these same shad. When you find the ladyfish…, you have found the trout and by the end of the month you will have found the reds as well.

Do not leave out of frustration because you initially catch only ladyfish. Keep switching lures. Sometimes the color makes the difference and at other times it is the length of the tail. It is the same thing with a topwater. It is not at all unusual for these trout to prefer the larger bait because they are eating the ladyfish rather than the shad.

A minnow type lure that you can pull down a foot or so under the water like a Strike Pro Arc Minnow or MirrOlure floating MirrOlip often works even better than a conventional topwater. Swimming a longer tail rigged on a light jig head can be deadly as well.

You are absolutely going to catch more fish when fishing this program rigging a 4-inch TTF Flats Minnow or a Sea Shad on a two foot leader under a Kwik Cork, but it is almost impossible at times to keep the lady fish off the smaller tails. If that becomes a problem, try rigging a 5-inch tail on an exposed 4/0 Mustad wide gap hook beneath your cork before calling in the dogs. The weightless tail sinks slower and the trout love it!

By the time you read this we will be sweating out hurricanes and cruising the lake looking for those massive schools of redfish churning the surface. It happens every year about this time and the bait is already there. There is no right or wrong lure or retrieve when you find these fish!

Fishing is about the kid in all of us…take one fishing tomorrow!