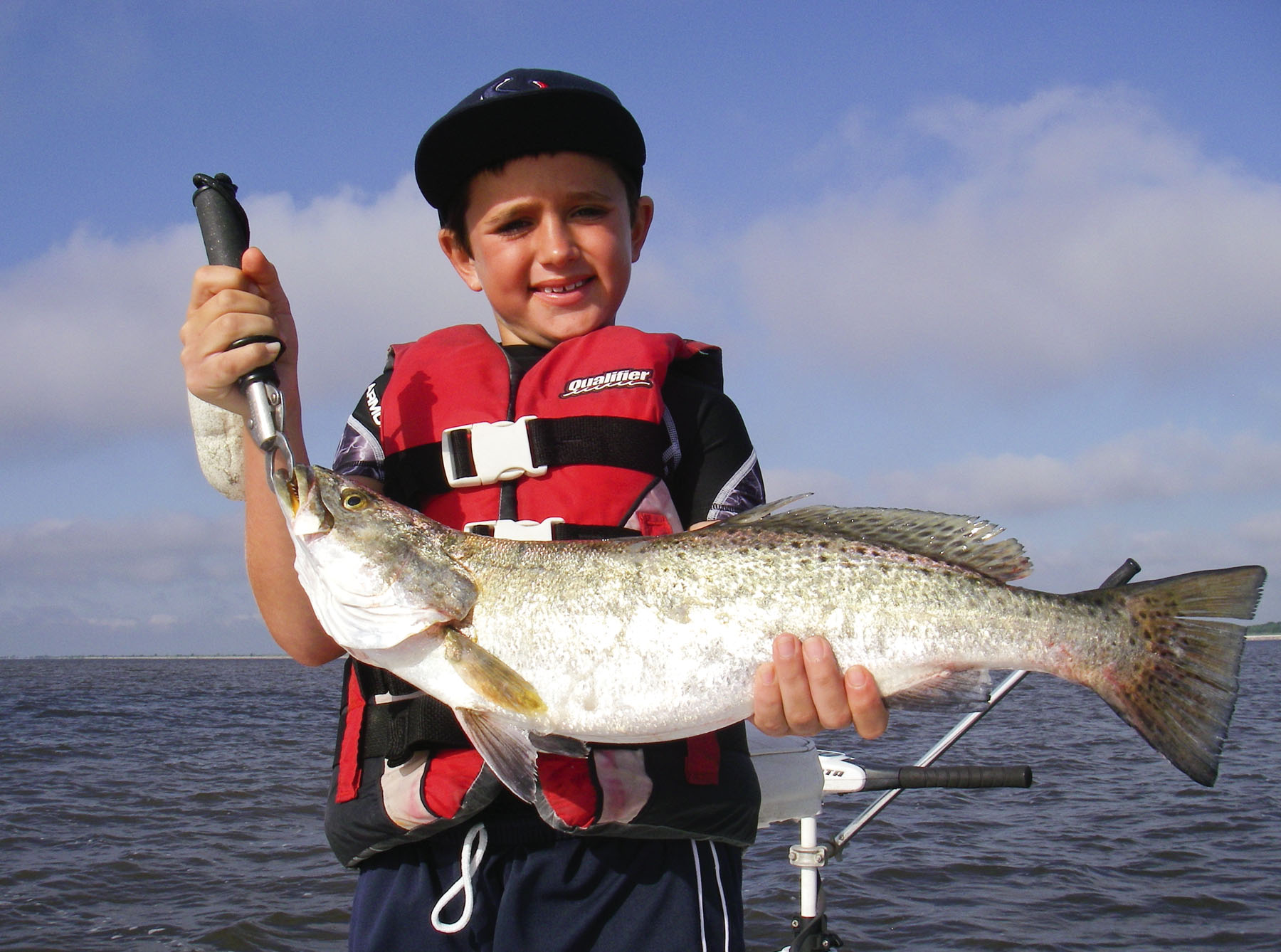 …and he put his big trout back to fight again!
The combination of more wind than we are used to this time of year and scorching sun has made things a little tougher on Sabine. The reward for rising early and taking advantage of the pre-dawn bite, however, has still been well worth the loss of sleep.

The post-spawn trout are skinnier than a month ago but we are still catching lots four to five pounders. I would like to think that more anglers practicing catch and release has something to do with the increase in the numbers of bigger trout.

There still hasn't been enough gull activity to tell if the school trout are larger this year as well due to the small size of the shad. There are enough shrimp to make that bite work when the wind allows but the real calling card would be the shad and they need to get just a little larger.

Until that happens, or even after, there is no reason to abandon the flats bordering the ICW. You can wade or drift, but the key to catching these larger trout is stealth and long casts. On most mornings this is even more important than choice of lures.

The best topwaters have been the smaller Spooks and She Pups in bone or chrome/black back once the sun climbs above the Roseau cane and darker colors while it is still dark. When they won't just bury a topwater we are switching to 4-inch Usual Suspect swimbaits or 5-inch tails rigged on a 1/8 head. When they prefer the vibration of a paddletail we are fishing the Die Dapper in roach, chicken on a chain or glow chartreuse, depending on clarity.

When the added vibration doesn't make a noticeable difference we are doing just as well fishing a Texas Shad, Trout Killer or Split Tail Mullet a little faster than the paddletails. If you aren't already tying your tails on with a loop knot I would recommend giving it a try. Not only does it breathe life into your bait, but makes it much easier to free up when snagged on shell as well.

When the shallow water action ends each morning we have struggled to extend the bite. Once the reds and trout start blowing shad out of the water in the open lake it will obviously be much easier, but for right now probing the deep water bite in the ICW has been the more productive option. A good tide movement is a must and locating schools of suspended bait will shorten the search.

When we have been fortunate to find the fish we are vertically jigging a Hoginar or Sea Shad on a 3/8 heads. The most cooperative schools seem to be suspended between 15 and 22 feet deep.

I feel reasonably certain that by the time you read this it will be "game on" in the open lake and it will help reduce the fishing pressure on the smaller stretches of real estate. Virtually any tail fished under a cork will work, but the much ballyhooed VuDu shrimp will be my first choice because of its staying power. It will melt if stored with other tails, but it is incredibly tough otherwise and the fish won't tear it up.

You can find schooling redfish anywhere in the lake this month, but look for the most consistent schooling in the middle. There are a number of isolated shell pads in that area, but more importantly the shad hold tighter due to minimal boat traffic. When you locate a school of surface feeders, mark it on your GPS. The reds will be back, if they ever really leave, and it is a great reference for future trips.

There is no doubt the ship channel from the Causeway to the end of jetties is serving up not only a more dependable bite, but a more diverse bite as well right now, but that is not my bag and anything I can report is secondhand. I have spent my entire life fishing both rivers from I-10 south to the Causeway and any trip further south is still an adventure for me. That stretch of water is far more weatherproof than the north end and usually more user-friendly for those that know how to fish it as well.

They have had some solid weights posted in the S.T.A.R. thus far, but there is still leeway for more winners. Sign the kids up and give them a shot at a college scholarship. The entry fee is a bargain and the memories will last a lifetime!