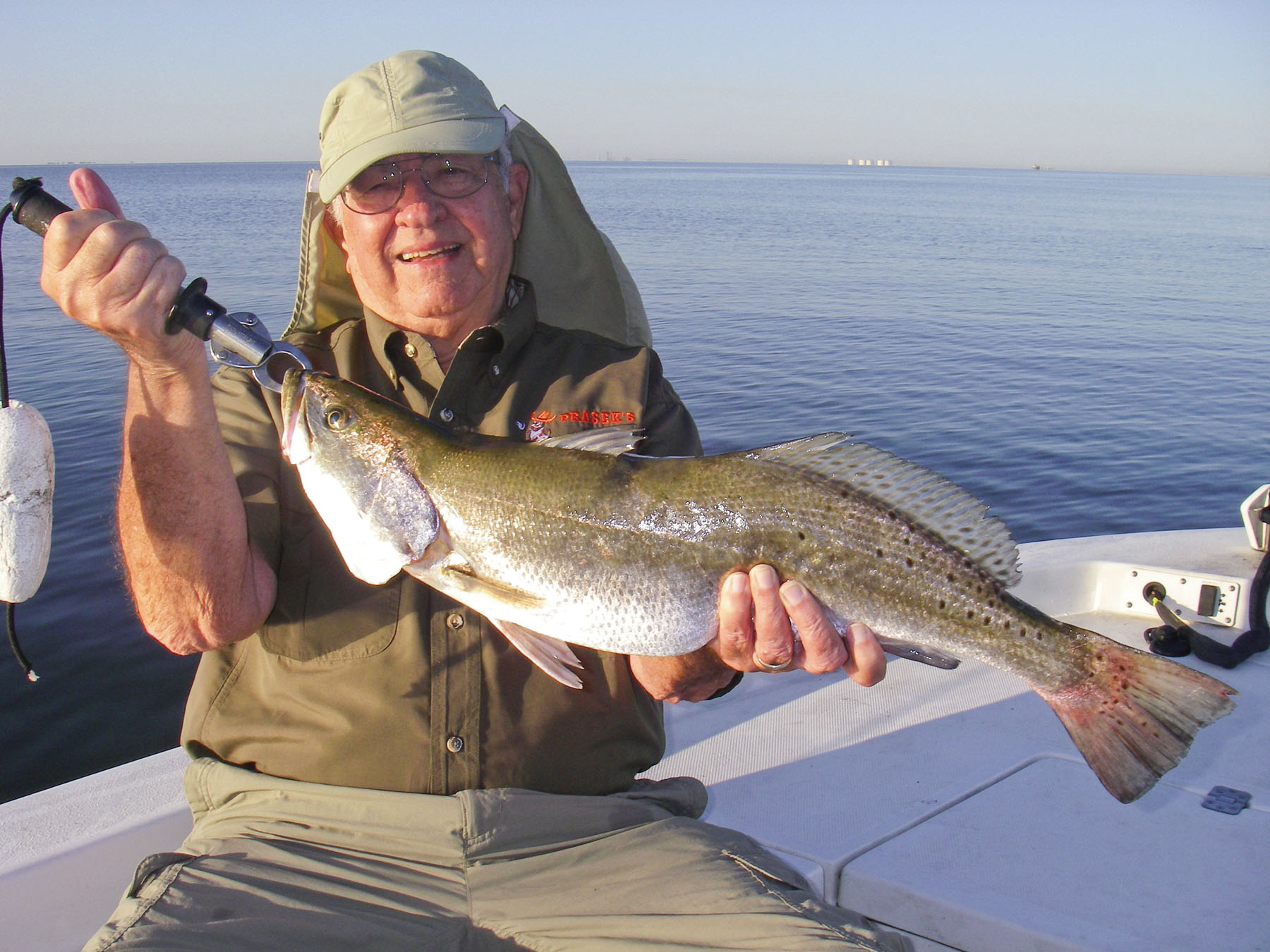 Russell Fregia took advantage of a flat lake.
Sabine anglers that have adjusted to daily winds of 15+ mph are not complaining about the weather or the bite. As far as they are concerned the only bad news is that it forces more fishermen into small semi-protected areas. The good news is that fewer fishermen are willing to make a long wet run or grind away in the whitecaps.

For fishermen that have confidence in their adjusted approaches, the only bump in the road has been exceptionally high tides and dirty water on most of the flats on the north end. Toledo Bend has not released as much water of late, but we are under a flash flood watch coming on the heels of five consecutive days of thunder storms even as I write this column.

Not unlike every bay on the coast our usually predictable patterns are all a month or so late, but that affects the bulk of the summer anglers that look to chase trout and reds under the gulls more than it does hardcore trout fishermen. The fish are out there, but smaller concentrations of shrimp and the white caps discourage the birds from working.

We have absolutely made a living on the dirty side of color changes on the flats, both at the north and south end of the lake. The tide is a major player but we are keying on pods of shad and scattered mullet more so than depth or any type of structure. Preferably the color change will be in water three to five feet deep and any shell in the area is a bonus.

We were starting to see more visiting anglers score with croaker prior to the latest round of rain, but we have still enjoyed some very good days swimming 5-inch tails and twitching suspending hardbaits just beneath the surface. Color has not been nearly as important as the length of the bait and speed of retrieve.

We are making long casts ahead of the drift; 1/16 or 1/8 jigs makes it easier to keep the lure up in the strike zone. In the dirtier water the Assassin Die Dapper and Big Minnow XL have worked better due to the vibration of the paddle tail, but when fishing the clear we have done better with the Assassin rat tail and the Tidal Surge split tail.

Hands down our number one choice for hunting fish has been the H&H Usual Suspect, some days we never take one off, but it is not unusual to locate the fish with it and then beat up on them with everything from She Dogs to tails.

I am convinced that simply casting it out and reeling it back will catch fish much the same as when a novice bass fisherman is armed with a Rat-L-Trap. There are also subtleties in the speed of retrieve that, much like the Trap, tend to make it even more effective. More importantly, however, the bait spends most of the retrieve in the strike zone, produces a ton of vibration and few strikes go undetected as you are always in contact with the bait.

At this point, just to be on the safe side for the upcoming month, I am going to assume that the wind will not grant us any extended breaks and continue to make catching a little tougher. It will eventually stop raining and evaporation due to the summer heat will help minimize that problem. The deep water river patterns may suffer a little, but they will improve by early fall.

As much as I hate to say this, the jetties and ship channel south of the Causeway will probably yield the most consistent trout and redfish bite on clearing tide changes. The protected Gulf side of the walls and beachfronts have been good for everything from trout to tripletail. Oversize redfish are never far off the rocks and Spanish mackerel alone will keep you busy.

Gulls in the open lake will be an unexpected bonus most days. We will continue to drift the flats and wade them when possible, but the revetment walls will also draw big crowds for good reason. The water, more so on the north wall, is usually clearer and the constant buffet of mullet and shad attracts big trout. She Dogs and Spooks as well as Catch 2000's and Swimming Images are good choices even in the heat of the day. Look for the slicks!

I hope you have had an opportunity to get the kids on the water as another summer is all but over and school is right around the corner. A trip tomorrow is never a bad idea!